Distress Signals by Catherine Ryan Howard, thriller set in Cork and on the Mediterranean.

A tightly plotted debut thriller that glides from Cork and on to a cruise liner ploughing the Mediterrranean waters between Barcelona and Villefranche (for Nice). 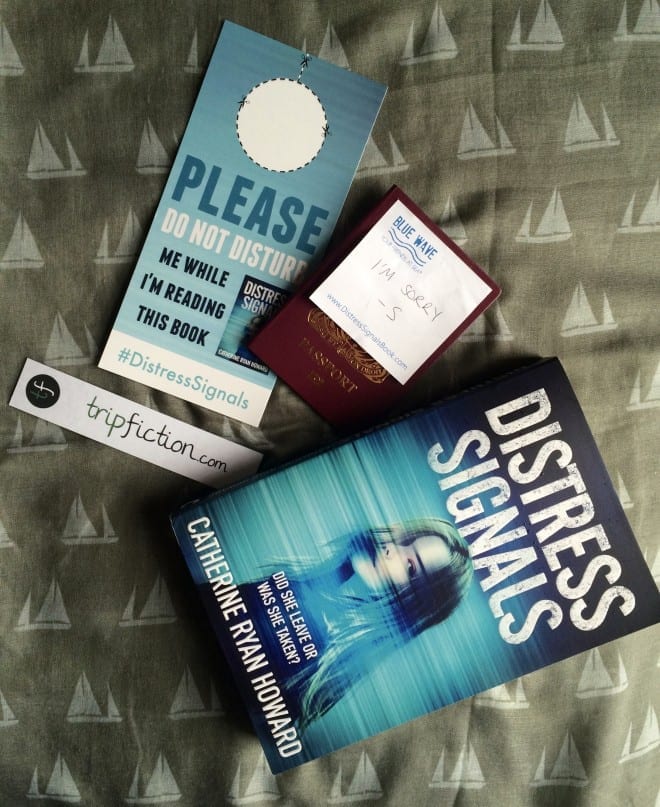 Adam and Sarah seem happy enough, and have been together for 10 years. Sarah announces that she is due attend a work conference in Barcelona, and Adam takes her to the airport. Her absence will provide him with plenty of time to work on the Hollywood screenplay which is looming, and through which his star will rise. But time is short and pressured. A perfect opportunity to get stuck in to the project.

A confirmatory text that Sarah has arrived, he thinks nothing of the fact that she is on radio silence thereafter….. at first, that is. But soon his disquiet grows, especially when he hears that her parents have heard nothing and that at work she has called in sick. The facts do not match the story she has told him, although to begin with he is not unduly worried. She is – as the Garda (police) in Cork tell him – a grown woman, and further, of all notified missing persons, it is only a tiny percentage that disappears forever. He, however, is not convinced.

Through Sarah’s best friend Rose, he learns of very unwelcome news, which not only upsets him but further unsettles him. As time passes, he starts to delve into the internet, and becomes increasingly alarmed by the connections he starts to make, sufficient for him to head for Barcelona and book himself onto the same cruise-ship, the Celebrate, on which Sarah seems to have been.

This is a good thriller, where the storyline is in part built on aspects of maritime law, which is fascinating. For example, any crime committed on a ship is investigated by the police force where the ship is registered, in this case Barbados; unless the victim involved is American, in which case the FBI comes hurtling in.

I certainly found this to be very readable and hard to put down. If I had one minor quibble it was that I felt the ending wasn’t as tightly plotted as the main body of the story, and meandered a little.

Will you risk reading this thriller, set on a cruise-ship, if you are about to embark on cruise holiday on the high seas??

Now over to Catherine who has kindly agreed to answer our questions:

TF: Part of Distress Signals is set on a cruise-liner. Clearly you have quite some knowledge about the workings of a ship, both above and below deck. How has this come about?

CRH: I’m afraid the answer is very boring: I spent a lot of time online. Mostly I was delving into the dark side of cruise ships, namely the failings of maritime law and the tragic cases of deaths, disappearances and other crimes that seem to take place with frightening regularity on board these huge liners. In terms of the passenger experience, there is a wealth of blogs, websites, forums, etc. online dedicated to cruising, as well as the information provided by the cruise ship companies themselves. I also take “write what you know” not to mean “I’m a lawyer so I should write a legal thriller” but “put what you do know into your book”. So although I never worked on a ship myself, I used to be a housekeeping supervisor in a 2,000+ room resort hotel and I drew on what I knew about the day-to-day running of a housekeeping department for the book – I made Corinne, the staff member we follow on the Celebrate, a cabin attendant. I also have a few friends who did stints on cruise ships, working in various roles, so naturally I pumped them for information.

TF: You have really captured the feeling of being unheard. Adam is adamant with the police that Sarah is missing, it is so out of character for her – yet procedure is to allow time, as she is an adult. Hugely frustrating. How did you research the procedures around missing persons?

CRH: I came across a statistic from the Missing Persons Bureau (the department of An Garda Siochana, i.e. the Irish police, that handles missing persons cases) that said in 2013, nearly 8,000 people were reported missing but of those, only 10 remained missing at the end of the year. This really got me thinking about what would happen if you went to the Gardaí to report a loved one missing – knowing that the vast majority of missing persons are soon found, would they take you seriously? And what if it was an adult with no health issues who had the means to travel? Who’d lied to friends and family about where she was supposed to be going? I imagine they wouldn’t exactly send out the helicopters and sub-aqua teams. And how would you deal with you that? The helplessness must be terrifying and I wanted to examine that. I’ve also read a number of novels where, in a prologue, someone goes missing, and then chapter one flashes forward a year or ten to when a new piece of evidence or a new sighting turns up. This to me is glossing over the most emotionally wrought part of the experience: the first hours and days after the person fails to be where they’re supposed to be. I wanted to explore that idea, to follow such a nightmare through, day by day and ask myself what would I do to find a missing loved one, if it all down to me?

TF:  Cork comes across as a place you know very well. What is your connection to that part of Ireland?

CRH: I’m from there and I’ve lived there most of my life. I’m in Dublin now, but I only moved here in 2014. I really did draw on my personal knowledge of the city: Adam and Sarah live in what is essentially my old apartment on the Douglas Road, Sarah works near where I used to work on the South Mall and Adam meets his friend for lunch in a coffee shop on Western Road I’ve been in a million times.

TF: What was your path to publication and what advice do you have for aspiring authors?

CRH: There’s really two answers to this question. On one hand, this is something that I’ve been working on for years. Back in 2009 I quit the job I had at the time in order to go “all in” on my dream of getting published. I started blogging, self-published non-fiction, began speaking on the subject and leading workshops and seminars on that and using social media to sell books, got a job working freelance for Penguin Random House doing social media stuff for them and ultimately, in September 2014, went back to college to study for a BA in English as a mature student. Essentially, I turned every single aspect of my life towards books and stories and writing. But… When I finished Distress Signals, I tried to get an agent. I found Jane Gregory, followed the instructions on her website to the letter, and submitted just like anyone else would – I attached my opening chapters to an email and off it went. A few weeks later, they asked for the full manuscript. A few weeks after that, they offered me representation. She then got me the book deal with Corvus/Atlantic. So while all the stuff of the last few years has stood to me in other ways – and it was all a lot of fun – when it came down to it, the book was all that mattered. Nobody said, “Oh, we think the book is pants – but she has 5,000 Twitter followers so let’s publish her!”

TF: What is next for you both as a writer and personally?

CRH: Right now I’m finishing the first draft of my second novel which is also a standalone thriller, only this time decidedly set on dry land (Dublin). It will be published by Corvus/Atlantic in May 2017, so I better hurry up and finish it… I’m also preparing for my university exams, which conveniently start the day before Distress Signals comes out!

For more books set in the high seas, check out our PINTEREST BOARD