Home Latest A book, a meal and a place – IRAN (via IRELAND)

A book, a meal and a place – IRAN (via IRELAND)

Here at TripFiction we love to bring you books with a strong sense of place, to help you see a destination through an author’s eyes. Well, we also love to tell you about food around the world and – thanks to the gastro genre in our bulging database– it’s easy to match a book with a place and its food.

Next up in this mouthwatering new series….IRAN (via Ireland!).

For the inhabitants of the damp little Irish town of Ballinacroagh, the repertoire of gastronomic delights has never extended farther than the limp meals of the local inn’s carvery. But things are about to change when the beautiful Aminpour sisters – Marjan,Bahar and Layla – arrive, determined to share the magic of their kitchen with the friendly locals.

Opening Babylon Cafe, right in the heart of town, they begin serving up traditional Persian dishes and soon the townsfolk is lured to the new premises by the tantalizing aroma of fresh herb kuk, lamb abgusht and elephant ear fritters, washed down with gallons of jasmine tea from the old samovar….

Not everyone welcomes the three women with open arms, though. The way to a man’s heart is through his stomach, as they say, and the women of Ballinacroagh want their men back …

Filled with recipes, mouth-watering fragrances and mysterious spices, Pomegranate Soup is a heart-warming tale of romance, friendship and exotic food.

Due to its variety of ethnic groups and the influences from neighboring cultures, the cuisine of Iran is diverse. Herbs are frequently used, along with fruits, including plums, pomegranate, quince, prunes, apricots, and raisins. To achieve a balanced taste, characteristic flavourings such as saffron, dried lime, cinnamon, and parsley are mixed delicately and used in some special dishes.

Iranian food culture contains a wide range of main dishes, including various types of kebab, pilaf, stew (khoresh), soup and āsh, and omelette. Lunch and dinner meals are commonly accompanied by side dishes such as plain yoghurt or mast–o–khiar, sabzi, and torshi, and might follow dishes such as borani as the appetizer. 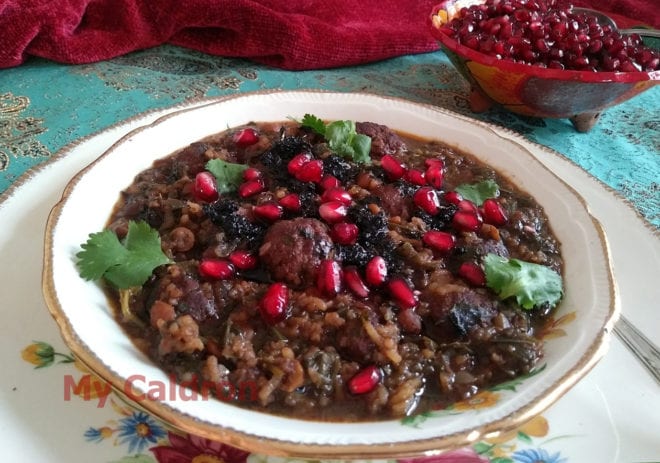 Image courtesy of My Caldron

Bursting with classic Iranian (Persian) flavours, this hearty, sweet-and-sour pomegranate soup (aash-e anar), combines the earthy sweetness of beetroot with the sharpness of pomegranate molasses. Thickened with beans and rice, the final dish is more of a stew than a soup, and is a perfect one-pot meal, especially when served with some warm toasted bread.

Fresh herbs and a garlicky topping add the typical Persian freshness to the meal, and any leftover yoghurt makes a great dip for accompanying crudités or crackers.

Iran is a republic in Asia, sharing a border with seven countries: Afghanistan, Armenia, Azerbaijan, Pakistan, Iraq, Turkey and Turkmenistan. It has been officially known as the Islamic Republic of Iran since the overthrow of the Shah in 1979.

The country has a rich and troubled history. One of the world’s oldest civilisations, it was the largest empire in history until it fell to Alexander the Great in the 4th century BC. Its central location in Eurasia and proximity to the State of Hormuz make it a strategically important player in Middle Easterm geopolitics. Internally, the country has been ruled as an Islamic Repuiblic since the violent overthrow of the last Shah in 1979.

Iran’s rich cultural heritage is reflected in part by its 22 UNESCO World Heritage sites, and by its exotic cuisine.

We hope that has whetted your literary and foodie appetites, and transported you to IRAN (and IRELAND!).

Where would you like us to take you next for a book and a meal….?

Please leave a comment below or join team TripFiction on Social Media:

Andrew for the TripFiction team