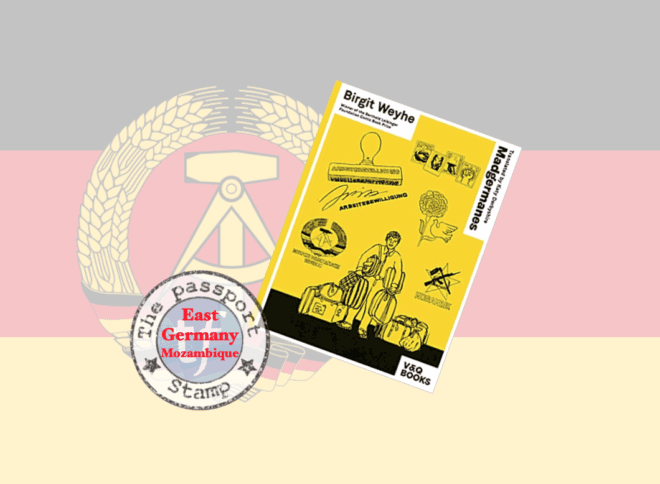 It is certainly quite some time since I have read anything with cartoon graphics. This is a simple and effective way of getting across the message about a period of history, when there was a huge divide between ‘The West” and the socialist states of the East. 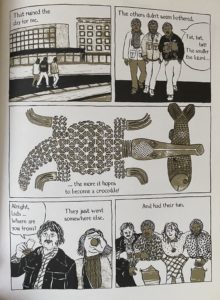 Eastern Germany had lost a lot of labour to western economies before Germany became divided. Once the Wall went up, East Germany really needed to find people to work in order to keep the country going. A simple solution was to look to sister socialist countries. and East Germany alighted upon Mozambique. The lure of working in East Germany (The GDR), with the temptation of a better life, was of course appealing. The war of independence (from the Portuguese) in The People’s Republic of Mozambique’s ran for 10 years from 1964 and many people suffered and were displaced and desperately wanted something perhaps easier and different. Therefore the idea of a potentially better life in ‘Europe’ must have been alluring.

The reality was, of course, very different. This is very much the story of three fictitious individuals, dovetailed from many interviews the author carried out.

These overlapping stories are just examples of the lives of 15/20,000 workers who were corralled in accommodation upon arrival, who were discouraged from mixing with locals, who were only paid half their wages for the time they were in the country, and who worked in factories – a long cry from what they felt they had been promised. Once the Wall came down in 1989, they were summarily shipped back to their home country, which of course, after they had spent years in East Germany, was no longer home. New, unified Germany approached the issue of these workers as a former East German issue and therefore didn’t follow 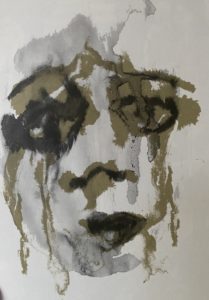 through on promises of pay and care.

Where this situation has landed in present day, I would be keen to know. I know nothing of this period before reading this book. In the UK the Windrush generation suffered an equally egregious fate, and the long term consequences of unfulfilled promises made by government are still reverberating and affecting the subsequent generations.

This is a sensitive portrayal of a period of history, brought to the reader through European and African blended illustrations that depict belonging and migration, and the trauma of displacement, learning to adjust to a very different culture that wasn’t always accepting or respectful of the incomers. A charged book that brings to life a time and a people whose story is perhaps not widely known but really needs highlighting

I certainly learned a lot about this period and value the learning, and enjoyed the variety of skilled illustrations.

I leave you with the end  passage: “Like all other emigrants who have set out for a new life, I belong neither in one country nor the other.  We are all without ties, unanchored, floating between cultures. No matter whether we go back or stay”. Thought provoking, isn’t it!

Giveaway – A Christmas package including 2 books to transport you to Greece). We are delighted to have a...

A literary ‘experience’ set in London

A literary ‘experience’ set in London

The Way of All Flesh by Ambrose Parry, crime mystery set in mid 19th Century Edinburgh. SHORTLISTED FOR THE...

Stone Cold Trouble by Amer Anwar, crime thriller set in Greater LONDON. “Together they stand: together they fall” Stone...

We found ourselves discussing books that have a parrot at their heart, over on Twitter. It started with a...

A coming of age novel set in NORFOLK

A coming of age novel set in NORFOLK

The Whale Tattoo by Jon Ransom, a coming of age novel set in NORFOLK. When young and troubled Joe...