#TalkingLocationWith … author Ann Bennett, shares her experience of researching Kanchanaburi and the Death Railway, for her third novel in the Thai-based Bamboo Trilogy – Bamboo Road

The location for Bamboo Road chose itself. It is the third book in my WWII trilogy set in South East Asia and is set in Kanchanaburi in Thailand. It is the town in which the real Bridge on the River Kwai is located and the headquarters for the building of the Thai-Burma railway. By the time I came to write Bamboo Road, I had already written one novel partly set in and around the town. Bamboo Heart is the story of a prisoner enslaved on the railway.

Kanchanaburi is a lively, picturesque town on the banks of the River Kwai, in a huge valley surrounded by jungle-covered mountains. It is about 140km from Bangkok. Many visitors simply take a day trip from the capital, but Kanchanaburi is worth much more than that.

I have been there four times now, travelling from Bangkok on the Thai-Burma railway itself, which still runs from Thonburi station in Bangkok as far as Nam Tok (60 km beyond Kanchanaburi towards the Myanmar border) – a journey which is featured in both Bamboo Heart and Bamboo Road. 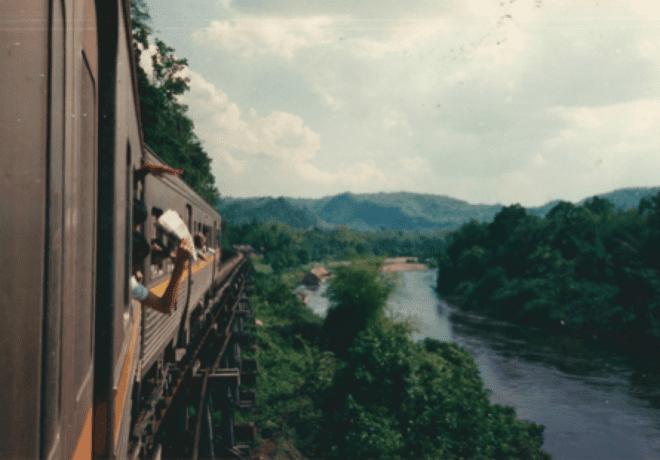 When I first discovered Kanchanaburi in 1988 I had no idea that one day I would write about the town, but all my visits, and my diary entries from those trips, have provided ample inspiration for my books.

That first trip was with my mother. We were on our own particular quest to see the place where my father had been a prisoner of the Japanese enslaved on the Thai-Burma Railway. We stayed in a tiny hut on the banks of the river. I used this as the setting for where Laura stays in Bamboo Heart when she travels to Thailand to find out about her own father’s wartime experience. 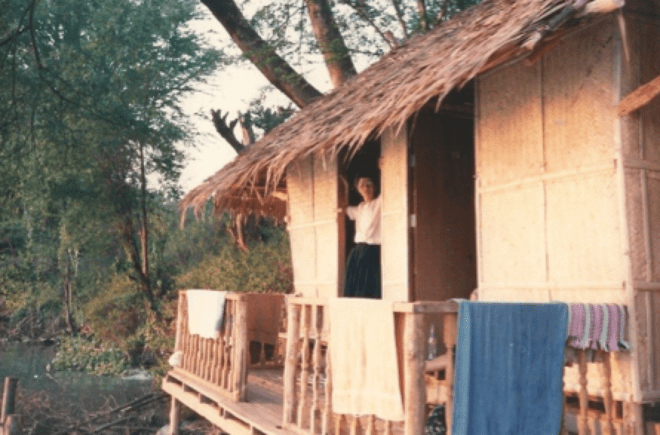 My mother in the hut on the river Kwai in 1988: inspiration for a setting in Bamboo Heart

In my diary I refer to the guesthouse as the ‘VT’ Guesthouse’. There is still a ‘VN Guesthouse’ there which has expanded, but it is still a great location. I’m sure the disco boats still float past on the current in the small hours just like they did in Bamboo Heart.

Mum and I walked over the Bridge on the River Kwai, of course. There weren’t many visitors back then!

We visited the war cemeteries, and the only museum that was there at the time to document the building of the railway- the JEATH museum, a quirky place run by a Thai monk (which I renamed as the DEATH Museum in Bamboo Heart). The museum is housed in atop huts, replicas of those the prisoners would have lived in. It displays the living conditions, the horrors of sickness, torture and back-breaking work they endured. I wrote in my diary, ‘Most harrowing of all were the accounts by the men themselves and the artists impressions. Felt rather stunned and sickened by it all.’

Bamboo Road, set in Kanchanaburi during the war years and in 1970 is the story of a young woman, Sirinya, a member of the Thai underground, who along with her family, risks her life to help the prisoners of war building the Thai-Burma railway. It opens in 1970 when she returns to the town from a long absence in England intent on settling old scores. The book relives her wartime story and follows her on her quest to uncover past betrayals.

It was inspired by the true life story of Boon Pong, a Kanchanaburi vegetable merchant contracted to supply the POW camps, who along with his family took great risks to smuggle medicines and extra food supplies into the POW camps right under the noses of the Japanese. Boon Pong’s shop is still there, selling vegetables Pak Prak Road in the centre of the town.

When I first wrote the book, I hadn’t actually seen the shop itself, and the shophouse where Sirinya lives with her Uncle’s family came from my imagination. It is set in a much wider street with broad pavements. In 2015 I went there with my husband and there is now a small museum inside dedicated to Boon Pong’s memory. 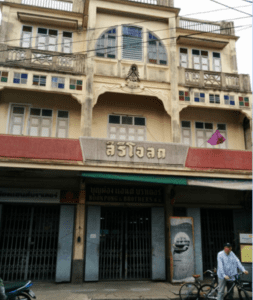 Boon Pong’s Shophouse in Kanchanaburi, inspiration for the shophouse in Bamboo Road

On the 1988 trip, Mum and I were befriended by a young Thai woman. Her name was Srithai, which I have since found out means ‘Free Thai,’ and is the name of the ‘Free Thai Movement’ which fought to resist the Japanese during the war. This, along with the V Organisation, of which Boon Pong was a vital part, both feature in Bamboo Road. It was only whilst I was writing that book, looking back at my old diaries, that I realised the connection.

Srithai was incredibly hospitable and keen to show us the local sights. She took us by bus to the beautiful Erewan waterfalls, where we swam in cool freshwater pools and the fish nibbled our toes. This was my inspiration for a scene in Bamboo Road where Narong takes Sirinya in his Bugatti. Srithai showed us the nearby cave temples – Wat Tham Mangkon Thong, which would also, nearly thirty years on, form the basis of a couple of important scenes in Bamboo Road.

We rode the rest of the Thai-Burma railway, over the bridge and all the way up to Nam Tok, through rock cuttings and along trestle bridges constructed along the sides of cliffs. 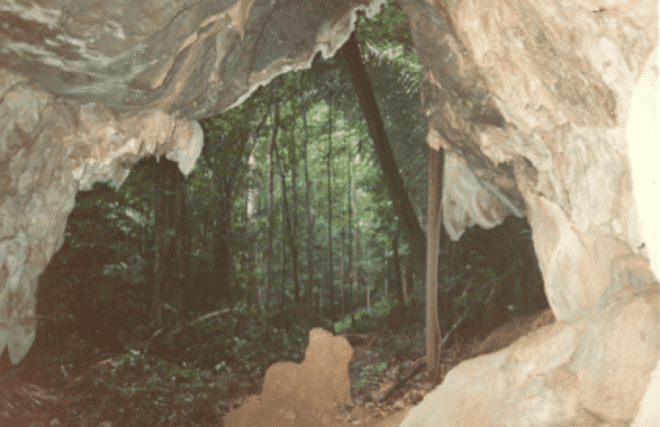 In 2005 I revisited the town with my husband and sons, then aged thirteen, eleven and eight. We stayed on the river in a big resort-style hotel called the Felix River Kwai, which has everything a young family might need – a huge swimming pool, lovely gardens and large rooms with balconies overlooking the river. Through the Apple’s Guest House, we booked day trips out of town, rafting down the Kwai rapids, trekking through the jungle, and elephant bathing (which consisted of sitting on an elephant’s back while it waded into the river and sprayed itself all over with river water), much to the delight of the children.

In 2010, whilst I was writing Bamboo Heart, I visited Kanchanaburi with my eldest son on a day trip from Bangkok. By that time I had discovered my father’s ‘Liberation Questionnaire’ in the National Archives in Kew. He had listed the actual prison camps he had been in. Terry Mantann from the Thai-Burma Railway Centre (a museum in the town) took us round the sites of those camps. We visited Chungkai War Cemetery, where once Chungkai camp had stood on the banks of the river, and Chungkai cutting, where my father must have worked. This is an amazing and evocative place. You can walk along the railway there and still see the marks where the prisoners chipped out the rock by hand. Chungkai is an important setting in both Bamboo Heart and Bamboo Road.

Chungkai cutting- setting for both Bamboo Heart and Bamboo Road.

A view of the Tenasserim Hills, where Sirinya’s grandmother lives in Bamboo Road.

In 2015 we stayed in a boutique hotel, called U-Inchantree, very near to the bridge. It has an outdoor restaurant on the banks of the river, and you can watch the morning train crawl across whilst eating breakfast. The hotel has free bikes and we were able to explore the neighbouring countryside. Once again we took the train to the end of the line at Nam Tok, where we spent a couple of nights camping on the banks of the river close to the Australian War Memorial and Hell-Fire pass – a famous cutting on the Death Railway, also featured in Bamboo Road.

You can buy all three books in the series here!

For more books set in and around THAILAND, just click here!