Villa America by Liza Klaussmann, novel set in the South of France.

When you go to the South of France, what do you take to read? Well, a book set there, naturally!

The book opens at the turn of the 20th Century on the East Coast of America, exploring the family dynamics of the Murphys and the Wiborgs. A union of their offspring results in the marriage of Gerald and Sara, who despite adversity, fight to be together. Gerald has never been the shining star for his father and turns to art as a way of finding fulfilment, whilst also struggling with his sexual identity. The Murphys essentially “invented Summer on the Riviera”

Elsewhere in America, Owen Chambers has honed his flying skills and is enlisted into being a pilot in WW1, a traumatic event stays with him.

As life moves on, the Murphys pop up on the Riviera, where they are like a beacon attracting the fashionable crowd to party and while away their days – the Hemingways, the Fitzgeralds, Cole Porter, Picasso… a social scene of richly diverse people. Often fuelled by alcohol the intensity of relationships bubble over, often with dramatic consequences. The author captures the period and the stifling social mêlée with acuity, the hedonism and drama of the times feel both seductive and at times out of control. Owen also turns up amongst the social elite in the South of France and is the one fictional character who plays an instrumental part in the plot.

Much is written and reported about the bigger players, many novels are devoted to Hemingway et al. In this instance the author has chosen to focus a little more on this lesser known couple, almost the backbone of the set, who owned the wonderful Villa America where much of the partying and activity takes place.

I was intrigued to know more about the building, but there is very little to be gleaned from the internet about the fate of the building. On TripAdvisor this little piece pops up about 112 Chemin des Mougins:

Just to report back in case there are any other Murphy aficionados looking for info on this in the future, we made it to Villa America which is still there. Unfortunately there is a massive metal door at the beginning of the driveway and a very tall hedge/fence so it is really only possible to see the white rooftop of Villa America Jemimagold, from Houston Texas on TripAdvisor However, it seems that the original building that the Murphys inhabited was pulled down and the current dilapidated house is not original (and the author picks up the story below)

We hand over to Liza who has kindly agreed to answer our questions: 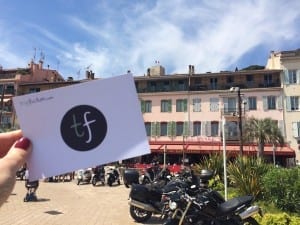 The #tripfictionpostcard pops up in the South of France

TF:  Several authors have drawn inspiration from the heady days of the crowd basking in life in The South of France of the earlier 20th Century. You have chosen to focus more on the Murphys. What drew you in particular to their story and how did you research the era and their lives?

LK: I first came across the Murphys when I was doing research on F. Scott Fitzgerald’s Tender Is the Night for my MA thesis. The book is dedicated to “Sara and Gerald, Many Fetes” and I didn’t really know who Sara and Gerald were. After doing a little digging, I learned more about the Murphys, and about how they had supposedly been the inspiration for the characters of Nicole and Dick Diver in the novel (a notion they rejected). ANd the more I learned about them, the more intrigued I became by this golden couple who had been muses to some of the most talented and famous artists of their time. Their personal relationships were also mysterious, and their own story tinged with beauty and tragedy. In short, I couldn’t resist them.

I ended up doing a great deal of research through secondary sources — the works of many of the artist friends (painting, poems, novels, diaries, memoirs etc.), as well as visiting the Beinecke Library at Yale which houses the Sara and Gerlad Murphy papers — a collection of their diaries, correspondence, and other materials a collected accumulated by them, their family and their friends. To touch their things was extraordinary.

TF:  We have done a little research into the villa that the Murphys purchased – Villa America of the title – but there is very little on the internet. It seems the original building was pulled down and now a very dilapidated structure stands, gated and forlorn, in its place. That seems tragic when it was such an iconic building, hosting so many iconic people of the time. Do you have any further information on what made the Murphys leave and its subsequent demise?

LK: The Murphys spent less and less time at Villa America their due to the illness of their youngest child Patrick, whose tuberculosis was thought to be improved by higher altitudes. Then World War II came and being in France became impossible. Finally, as it sat basically unused they ended up selling the house. By that point, so many of the people who had made the place special to them were no longer there, it was truly the end of an era. It was sold on several times before the house was torn down and the there is another house there now on the grounds, owned, it seems, by a Russian who employs full-time caretakers and a scary guard dog.

TF: Your first book Tigers in Red Weather (set in Martha’s Vineyard) was a real hit. It had the most wonderful cover. The Villa America cover is also very striking. How much input do you yourself have with the design?

LK:  Well, I’m lucky that the people who design my covers are so crazy-talented. I do get some say, in that I say whether I like it and they are generally kind enough to take my feelings into consideration. With the Tigers cover, we’d gone back and forth a bit on some other ideas, but we all felt that the image of the woman in yellow bathing suit, which had been part of the early early draft marketing materials, was the one. Like falling in love.

TF: As you know, books that are evocative of locale are the driver behind the TripFiction concept. What are you working on now, and will location be strong?

LK: I think place is always going to be a character in my fiction. In my new novel, it plays a very important role to my characters in that it is a home they return to after having been in the world, and having been hurt by it. This is the first time, however, that one of the major settings in my novel will be invented rather than based on a real place. So that will add a different dimension, as the reader will only be able to visit it in their minds.

LK: I like to do a rough outline, with my major plot points, or emotional highs or lows that the characters have to hot within the framework. And after that, I let it take me on ride. Because I think it might be too tedious to know everything in advance, with no surprises for the writer. Still, I like to have ti somewhat organized in my mind.

TF:  What books have you enjoyed so far this year?