Home Latest Memoir set in Biarritz (a town with a ‘surf-oriented ley line’). Plus Q&A with a seasoned surfer

Memoir set in Biarritz (a town with a ‘surf-oriented ley line’). Plus Q&A with a seasoned surfer 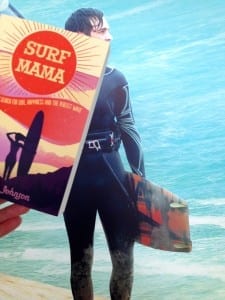 Wilma Johnson is living on the West Coast of Ireland with her husband and 3 small children. She is an artist and homemaker, whilst her husband takes to the waves and enjoys the surf. After 10 years and an increasingly wobbly marriage, the whole family decamps to Olatua, Biarritz in search of the Endless Summer Dream. Her surfing life at the age of 44 is just about to begin and she determines to learn to stand on a piece of fibreglass in the Bay of Biscay. Not for her any length of time on a boogie board – (otherwise known as a turtle rooter, speed bump or sponger) – which is surfed lying down, no, she is going for the full blown experience. It’s do or die (and dying is quite a real possibility as she goes on to describe), surfing to her mind is ‘deeply courageous’, the rip tides, the wipeouts, the eskimo rolls and the tubes. Not to mention the weather, which is a capricious factor in the surfer’s life: Biarritz seems to fluctuate between ‘tropical paradise and Bay of Biscay sea shanty’.

She talks to Phil Grace, who has surfed the world and now shapes individual boards in Hossegor, Biarritz. Johanna, partner of Christophe Reinhardt (surf star, whose Father ‘invented’ surfing on the West Coast of France) is a driver behind the Mamas Surf Club – which started out as Desperate Housewives meets Baywatch, through the Boobs and Tubes surf club (remember a tube is where the wave is hollow where it’s breaking. For some surfers it’s the be all of surfing. It’s sometimes called a barrel, keg, or pit..); to the The Nanas Surf Club (Nana means hot chick in French) to its final incarnation of the Mamas Surf Club (Mama in French means a sexually attractive, usually mature woman. Perfect!). So for this group of women it’s out with the sex wax (you need it for the board so you stay on it) and the neoprene.

And what do you need to learn to surf and be very core and very cool? Good abs? So to start she learns to do the ‘little press-up” – and as Christophe muses, surfing is 99% in your head and the other 1% requires complete fitness (plus a bit of inner goddess).

Now separated from her husband, and renting The Addams Family Mansion, as she calls her home, she has plenty of time to practise, all the while painting. It did occur to me that there was not a huge amount of overwhelming angst about her painting career, which is often the case for artists trying to sustain a living. But it transpires that in fact she used to hang out with Grayson Perry, the New Romantics, and goes on eventually to have a show at the Institute of Contemporary Arts in London, and then it’s off to Tate Modern…. so not too many worries on that score I would think.

This is a memoir full of determination and a life affirming attitude, bonkers in parts it has to be said, but I am left with a sneaking admiration for the author’s determination to become a female surfer – in a very male world – in the first decade of the 21st century. I enjoyed this memoir, it’s a vignette into the surfing world, written with candour and style. Would I like to try surfing? I think I might stick in the foam (the tiny waves that roll on the to the beach!) with my boogie board.

We asked Dave Crozier, a (seasoned surfer and professional snowboard coach, pictured below) who has based himself in Hossegor, 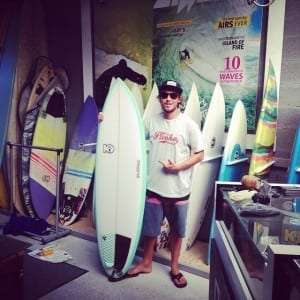 France (Hossegor holds a stop on the world surfing tour) to share some of his experiences in the world of surfing in and around Biarritz. This is his 5th summer season in Hossegor, but originally he learnt to surf from a young age in Tynemouth, UK. Surfing took a back seat when snowboarding took over so he basically had to relearn a lot of what he knew at the age of 21. He made the move to Hossegor because of the good consistent waves, the heat and the ease of finding work within the EU.

TF Wilma is over 40 when she first learns to surf. Is it still possible to learn to surf once you hit middle age and how would you go about it?

DC More than possible! Research is key, I see a lot of people grabbing a big plastic surfboard, heading to the beach and getting smashed around by the current and waves. Hossegor is not a gentle place if there is a wave. I would recommend reading visual books that explain currents, paddling and surf etiquette. Most importantly start with a lesson.

TF Christophe cites surfing as being a mind thing, with good fitness. What are the factors you feel are really important to learn to surf?

DC Breathing! Relax (your breaths last longer under water if you relax), eat well, surf daily and get up early.

TF How did you first get into surfing?

DC When I was a kid, I went to the cold waters of the North Sea with a wetsuit that didn’t fit me – had a lesson and never stopped since.

TF When Wilma first started to learn, it was a very male dominated sport. How have things changed since then?

DC There is a higher percent of guys in the water, I’d say, but women are out in full force and most rip better than the guys!!!

TF Wilma talks of boards being really important. Tell us a bit about your personal board and what makes it work for you.

DC I have a custom shaped board for my height, weight and ability. It’s from a local shaper in Hossegor called Kevin Olsen, who runs a company called Plonka Surfboards. It works well as it is designed specifically for me. Surfboard shaping is a whole new world, it’s more than just using a surfboard.

TF Which are your favourite places to eat and drink around Biarritz?

TF What does a ‘typical’ day for you look like?

DC My ‘typical’ day consists of an early start to check the surf. If the trees are moving inland I sometimes don’t bother, as the wind will make the waves not so good. After a check I would normally surf for 2 hours, come home and eat breakfast. Then catch up on emails and then return to the beach this time with my towel, board and friends. We hang out, play games, sleep and surf. In the evenings I work in a restaurant on the beach. I do this all summer and it seems to work quite well!

TF Surfing is very much a Summer activity. Johanna used to be a ski instructor in Verbier. What do you during the Winter season.?

DC In the winters I teach and coach snowboarding for my own snowboard specific school called Real Snowboarding. We provide lesson for all abilities in the ski resorts of Morzine, Avoriaz and Les Gets. It’s only 1 hour from Geneva and a huge ski area perfect for beginners to advanced levels.

Thank you to Dave for sharing his insights into the surfing world.

#TalkingLocationWith… Lizzy Barber, author of Out of Her Depth, set in Tuscany Italy, more specifically Florence and Tuscany, has always...

GIVEAWAY: Three copies of Out of Her Depth by Lizzy Barber, crime mystery set in TUSCANY. “..a simmering summer...

My Name is Adam – Children of the Ghetto: Volume 1 by Elias Khoury, an introspective novel set in...

Inspired to travel to Córdoba by fiction Here we are at last in Córdoba, inspired by fiction, a perfect...

A novel of Social Media culture set in USA

A novel of Social Media culture set in USA

Idol by Louise O’Neill, a novel of social media culture set in USA, in fictional Bennford and New York....