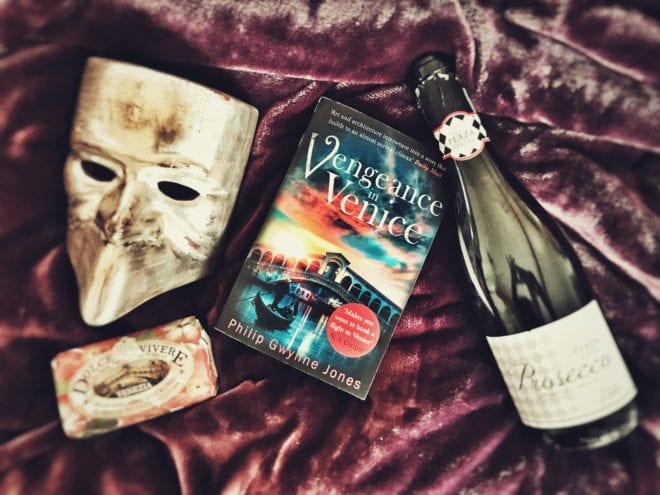 The Literary Review says “The Venetian setting is vividly described and Gwynne Jones’s good, fluent writing, makes for easy reading“. There’s not much more I can say, as that sentence sums up Vengeance in Venice. But here’s a little more about the book before you hurry of to buy it (which you will want to do) and armchair travel to Venice….

Nathan Sutherland is the honorary consul in the city and it is art Biennale time, when countries gather and set up peacock displays of art in pavilions all around the city. Nathan attends the Great Britain vernissage – reception – where Turner Prize nominee Paul Considine is showing his work, cutting edge glass displays.

And cutting it is. The glass structure on which art critic Gordon Blake-Hoyt (GBH by name and by attitude) is standing, implodes, precisely slicing through his neck and killing him. The finger initially points at the people who set up the exhibition but it soon becomes clear that a murderer most foul is at work, perhaps targeting the art critic establishment?

Nathan has a nose for people – he is after all a very affable and well liked honorary consul – and by chance stumbles on clues that could well indicate there is a murderer on the loose. He starts to intuit that specific clues, mired in art and music, may direct his investigations. How could Juditha Triumphans (an oratorio by Vivaldi) possibly fit in? 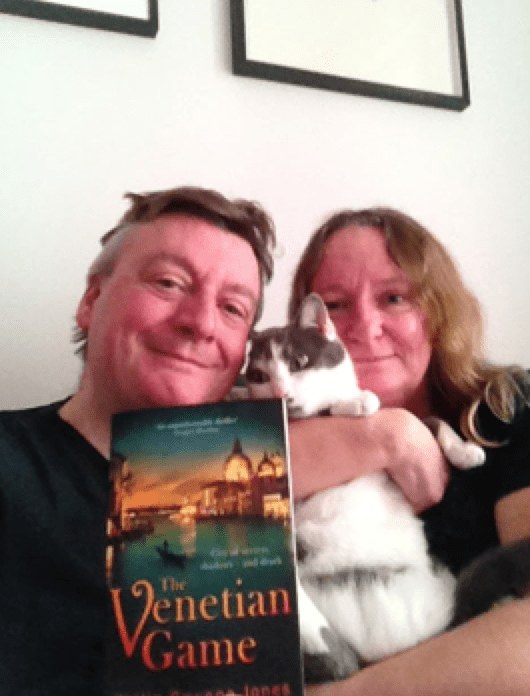 The author with “Federica” and “Gramsci” the cat

As he starts to unravel the mystery, he is supported by the ministrations of his girlfriend Federica and by his little companion Gramsci, the cat who pads around his apartment.

This book is what TripFiction is all about. It is a light and easy to read storyline, with touches of humour and great observations of locale and people. As the plot moves along, the early Summer sun dapples the canals and lights up the buildings, just illuminating this beautiful city. You really feel you are there with the characters! There are just wonderful observations of the city, from Santa Maria Ausiliatrice (where Wales is exhibiting), to interesting observations of the Arsenale, and to the walk from the station to Rialto where, the author observers, there are “some nice cichetterie, some decent bars and quite a few not-so-decent ones” – that will feel familiar to anyone who has been there. And whilst we are on the subject of cichetti (the little nibbles that appear with drinks) I will hand you over to Philip, who is sharing his top bars and a museum in Venice (which will be familiar to regular readers of our blog….)

Four Bars and a Museum : Eating and Drinking in Nathan Sutherland’s Venice

This might come as a surprise after a series of rather grim newspaper articles in the international media, but Venice is not short of great spots for eating and drinking. As anywhere, a little caution is advised : laminated menus with pictures of food are rarely a good sign. Affable meeters-and-greeters who try to usher you inside should probably be treated with the same suspicion with which you would treat any strange man who tries to get you to enter his house. As for the place I saw the other day which had a sign in the window reading “NO TripAdvisor Reviews!”…well, you can probably form your own idea of a place where the proprietor is actively seeking to stop you from reviewing it.

But, as I said, there are some great places. There are few problems that cannot be solved by a spritz at Nico’s on the Zattere. There may be a “view tax” to be paid at Paradiso just outside the Giardini della Biennale – but what a view it is! And, for an “event meal” at a reasonable price, I can think of few nicer and friendlier places than Ai Mercanti (Calle Fuseri, 4346/A San Marco). Here, however, I’ve listed five places that are just ideal for a lunchtime drink and a bite to eat. Nathan frequents some of them, and the others are a couple of my favourites.

First of all, don’t go looking for Bar Filovia. There is no sign on the outside. Indeed, for the past five years, I knew it simply as “The Unknown Bar” and it was only this article that pushed me to find out what it was actually called. It’s just down the steps from Piazzale Roma, opposite the number 2 vaporetto stop, and identifiable by the blue “Borgo Molino” awnings.

Now, this area of town is by no means the most attractive. The bar is open on two sides, meaning that it is unprotected from the blazing heat of the summer sun or driving rain in winter. There is nowhere to sit (and precious little room to stand), unless you count the passerelle that are placed outside in acqua alta season.

So why on earth would you choose to come here? Quite simply, because it does the very basics of what a bar should do very well indeed : the food and drinks are excellent and reasonably priced. The tramezzini are amongst the best in Venice – I recommend the granchio e rucola (crab and rocket) and gamberetti (prawns). Caroline swears by the Giapponese (smoked salmon and egg) but I haven’t got round to that one yet. Neither, for that matter, have I worked out the Japanese connection.

But the thing to have here is a panino alla porchetta with mustard, in either a crusty (croccante) or soft (morbido) roll. It’s a thing of wonder, a veritable Prince Amongst Sandwiches, and you won’t be needing your dinner until much later. Spritzes are first class. The chances are that you’ll be passing by Piazzale Roma at some point, and there is no better spot in the area for a quick lunch.

Oh, but this is a gem of a place. The ground floor and gardens were stunningly remodelled by the great Carlo Scarpa in the twentieth century. There’s a wonderful library on the first floor, whilst the second houses a fine collection of Venetian masterworks from the likes of Bellini, Tiepolo and Longhi. The gift shop will, at a stroke, solve all your Christmas/birthday/anniversary needs. And if that isn’t enough, you can have a splendid lunch here as well.

Spritzes in the smart, modernist bar and restaurant space are prodigious, and the toasties gigantic. Savouries, pastries and coffee are all good. Or, if you prefer, there’s a very good budget lunchtime menu in the restaurant itself. If you need to relax and recover afterwards, there’s a comfy seating area with racks of the latest Italian and international newspapers.

I do most of my writing in the library and frequently pop downstairs for a restorative coffee or spritz. If there were beds available and a space for the cat, I genuinely think I’d live here.

(note from TF – remember a percentage of proceeds of sales from Dream of Venice Architecture goes to the upkeep of this amazing institution!)

Also known as Bar Orso, so don’t get confused. Nathan and Dario have a drink here in the early chapters of “Vengeance in Venice”. It’s a cosy, warm, wood-panelled backstreet bar near the Rialto bridge and Campo San Bartolomeo. It does get busy, so there can be a bit of a crush at the bar, but it’s worth the wait. Spritzes and Negronis are both first class, and the food – a huge selection of cicheti, panini, miscellaneous things on sticks and some rather strange but very tasty things which are the closest Venetians get to pies – is excellent. 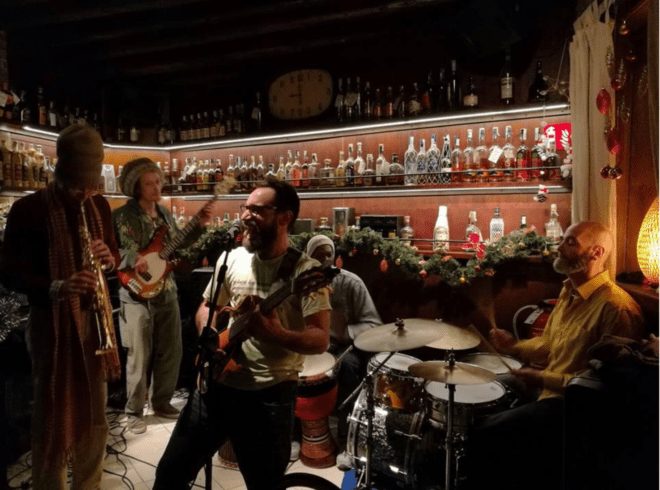 There’s a seating area with bar stools and comfy sofas, a restaurant upstairs and seating outside. If you want something more substantial than cicheti yet don’t want to stretch to a full meal, the club sandwiches and burgers are very good, and a little bit quirky. Occasional live music (some mellow jazz the last time I visited) and the background music (at a sensible volume) veers from 60s soul to the odd burst of Pink Floyd and Velvet Underground to keep Nathan and Dario happy. 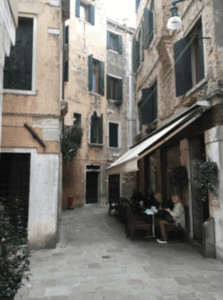 This will, of course, always be The Magical Brazilians to me. Yes, they really do exist, and they’re just around the corner and downstairs from Nathan’s apartment on the Street of the Assassins.

Now, Sig. Maturi was very rude about the catering here in “The Venetian Game” but I should point out that he’s notoriously hard to please (and, for that matter, fictional) and that the food actually looks pretty good.

It’s changed hands since I started visiting there, and the barman who was the basis for Ed in the books has moved on elsewhere. A great shame, he was a veritable Master of Negronis, and they were a thing of wonder. It’s still a lovely, atmospheric spot in which to sit outside and take a drink or two. 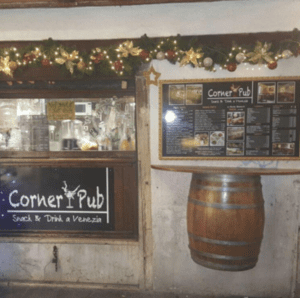 Easy to find – it’s on the way from the Accademia to the Guggenheim, just past St George’s Anglican Church (which is why it will always be “Church Pub” to me).

There’s a cosy, usually standing-room-only bar area, with a couple of rooms at the back if you need to sit down. Sandwiches are the thing here, and what a thing they are! Best of all has to be the focaccia with porchetta, radicchio and mustard, following which you will wonder if you ever need to have a different sandwich again. Ever.

Alessandro, the owner– burly, bald and heavily tattooed – is a lovely bloke, always in good humour, and the spritzes are excellent. They have an interesting twist on the classic Negroni with the addition of a few drops of Angostura bitters. I’m not sure if Nathan would approve, but I do. There’s also an interesting range of beers. Prices – as for everywhere else in this list – are extremely reasonable.

There are, of course, many other fine places to eat and drink in this city. I haven’t even had space to mention some of the city’s more famous cicheterie, many of which are justifiably legendary. These are simply some of the places where Caroline and I tend to end up spending rather a lot of our time. We hope you get the chance to spend a lot of your time there too. 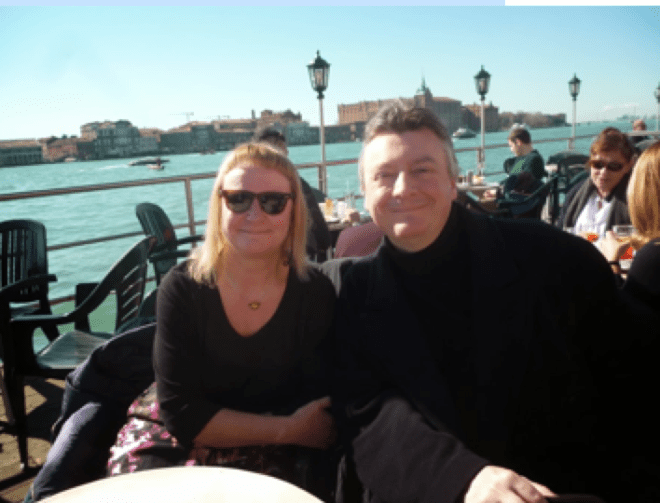 We will be running a giveaway later this month, featuring 5 copies of the book. Keep your eyes peeled!

For a huge selection of books to transport you to VENICE, just click here!

From amazing architecture to amazing migration, lost kingdoms to legendary continents, foods of the world to festivals of the...

Five tucked away spots in Paris. Let author Amy Tector be your guide My upcoming novel, THE HONEYBEE EMERALDS...