Concentration Camps of Canada by Baron Alexander Deschauer and Lucky Deschauer – a sad tale of a subjugated people.

The title is misleading and – dare one say it – intended to shock. It is said by the authors (but disputed by others) that Hitler gained his ‘inspiration’ for the concentration camps in Germany from the treatment of the native population in Canada by the ruling colonials powers. Yes, they were herded into reservations and yes, they suffered many deprivations – but to say they were in concentration camps is a step too far. 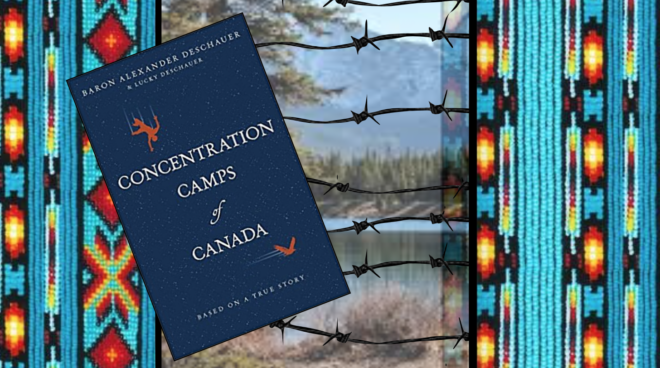 The exaggeration aside, Concentration Camps of Canada is an immensely moving book. We are told that ‘this story is an amalgam of real life stories and fiction, and that the truth lies within’. It covers the life of Migizi (re-christened David in the very harsh and abusive school he was first sent to when separated by the state from his parents) from the aforementioned school through his teenage infatuation with a white girl – which ended up in a beating from her father – to his life on the road in Canada, drinking excessive alcohol (strictly prohibited for Indians) and living off subsistence wages and free accommodation, and on to a very successful army career in WW2. The army was the one place he was accepted for his abilities and not rejected because of his race. After demobilisation he returned to a reservation in Canada and to second class citizenship. His children by his second marriage were taken away from him by ‘well meaning’ state officials – and the whole cycle of his life started again. Concentration Camps of Canada is, as I said, an immensely moving book which covers a period of Canadian history that I was not familiar with. And it is a long period. There is a chronology at the beginning of the book that details developments right through from the 1857 Gradual Civilisation Act  to the 2016 apology of the Premier of Ontario for his State’s role in the residential schools systems. It makes interesting, if disturbing, reading. It seems thankfully to be from another age…

Native Canadians are, of course, not the only indigenous people to be treated in such a way. Native Americans and the Aborigines in Australia have very similar experiences. In India itself the British imposed their culture and way of life on an ‘alien’ population. And the evils of the slave trade are still exposed in racial divides in the States. We are hopefully now moving on.

Concentration Camps of Canada does a great job in reminding us of ‘our’ behaviour in the recent past. But I doubt it has too much to do with the horrors of Nazi Germany.

For many more books to get under the skin of Canada, do access the TripFiction database