Home Latest Stories of Greece, plus we chat to author Victoria Hislop

Stories of Greece, plus we chat to author Victoria Hislop

Cartes Postales from Greece by Victoria Hislop, stories of Greece.

Stories within stories that wind their way around the country – charming, thoughtful, wistful and melancholic at times too.

Ellie is living up in North London where life and work are pretty humdrum But many of her days are brightened when week in, week out postcards pop through her letterbox, addressed not to her but to S Ibbotson, and signed “A”. Colourful and varied they chart one person’s progress through the Greek Islands, and they just keep coming. Ellie builds a montage of the bright and colourful images, a tantalising glimpse of the vast and varied beauty of the islands of Greece. Tempted to visit, she finds herself boarding a plane to Athens but just just as she departs, a journal arrives detailing the Greek odyssey of the sender of the eponymous postcards.

More stories follow on from the first, set all around the islands and at different time periods – one tale is of two brothers who are pitched against each other in modern day gladiatorial fashion by their father, each has to build up a hotel and whichever is most successful will inherit their father’s hotel conglomerate. But things do not go smoothly – the story sets the scene for the boom in tourism in the latter half of the 20th Century. Or the salutary story of Pelagia, innocently sweeping and cleaning in her local church, unaware of the effect she has on the (male) congregation.

There is everyday life, past and present, mixed with Greek mythology and mystery. A story about Vyronas – the poet Byron – who also ended up in the country and died in Missolonghi in 1824, leaving a town that “will always be in mourning for its past”….

Man on a MountainTop tells the story of two brothers, the priesthood and Mount Athos (where incidentally women and female animals are banned) a reworked mythological tale of two brothers, evocatively told. We also learn in another tale why some Greeks don’t plan anything of the least importance on a Tuesday (this was the day of the week on which Constantinople, the most significant place in Christendom, fell to the Turks).

The keeper of the diary says “I almost run out of words to describe the beauty of this country“.. a country of extremes, beautiful and monstrous edifices positioned side by side, seemingly beautiful landscapes, rugged terrains and people, who are welcoming and hospitable (for the most part!). This book will certainly boost tourism to the country and help with the economy that so sadly has made headline news over the last fews years, for all the wrong reasons.

The book is a wonderful piece of artistry, the photos are unusual, of mundane situations and often colourfully worked compositions (taken by the very talented Alexandros KakolYris) and it is just a wonderful item to hold in one’s hand. A delight both in terms of reading and the opportunity to see a place through the eyes of an author.

Tina for the TripFiction Team.

Over to Victoria who has agreed to answer our questions: 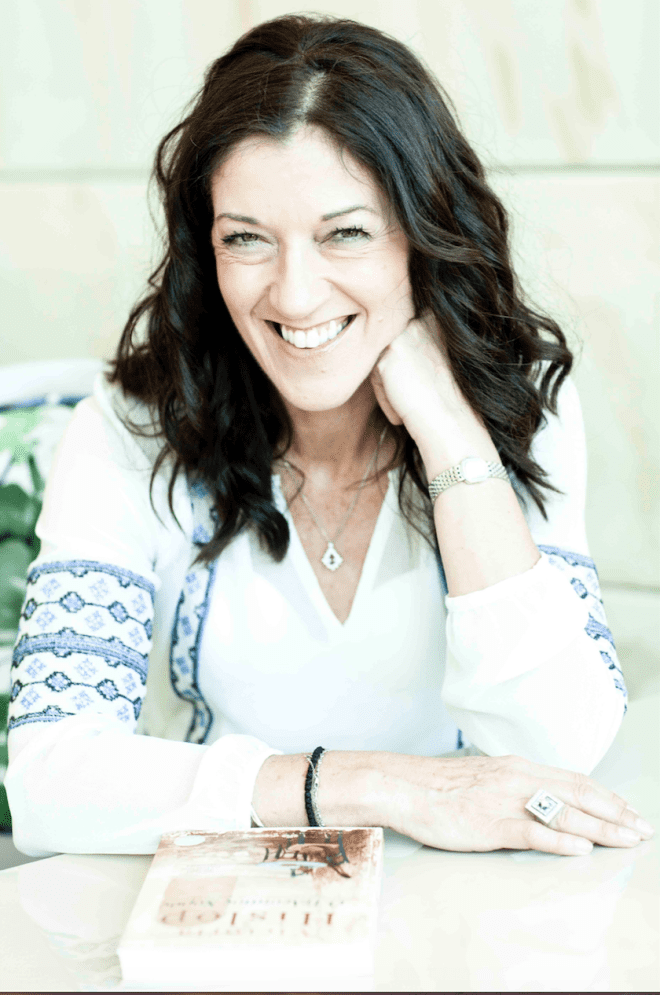 TF: This novel comes together beautifully, it has a very unusual construct and feels almost like a vintage story book (including a traditional ribbon book mark), snapshots of the familiar, yet original in execution. Stories within stories. Did you set out to achieve this feel for the book?

VH: Thank you! It developed organically but very quickly, this book. As if it had a life of its own. It has many layers – the postcards, the diary, the stories, the photographs. Everything, all my notes, the schedules for the travel which was needed for the research, even payments for petrol etc. were recorded in a blue notebook – and I have even shown the reader this notebook in the book itself. The blue notebook had a ribbon, so “Cartes Postales from Greece” has a ribbon too. It’s a really nice touch – almost the point where fiction meets reality. In the book, the reader is sometimes taken back in time but on the whole, we are in contemporary times. The postcard is an old-fashioned concept, in spite of the fact that every tourist shop has a display, the sending of postcards is a little “retro” now. So the design of the book I think reflects this very nicely.

TF: The photos add such an extra dimension, a visual aid to bring the stories to further life. How long did it take you and your photographer to explore the places that feature in the book and how many photos were actually taken – I imagine there must have been thousands. How did you whittle them down?

VH: We travelled at different times over a period of several months. The photographer, who is Greek, took many photos – I don’t know how many. There were several places which didn’t inspire stories –so there were lots of pictures that were unused in this Book. Only the photographs that have real relevance and meaning to stories are in the book. In some cases, a story developed because of the photographs, in other cases it was the other way round – but the words and pictures work very closely together – they are not simple illustrations/space fillers!

TF: You have found some incredibly relevant photos, like a photo of the Je Reviens Café. What came first, a sense of the stories you wanted to write or the photos or did they both dovetail as the project evolved?

VH: Every story has a different answer to this question. There was no set pattern. With “Je Reviens”, I saw this café several years ago, so when we went to Thessaloniki, I wanted to go back and see if it was still there. There it was, the same but perhaps a tiny bit more dilapidated than a few years ago. And as I sat down to write the story, I realized that this place was the “location” of the whole narrative. And the rest of the story, concerning Independence Day seemed to blend happily with it. There was something so sad and wistful about the place itself, and its name, Je Reviens, I will return, which suggests so much promise and hope.

TF: Please can you tell us how you have come to have such an affinity with Greece? For me, as a simple tourist to the country, you seem to capture the essence of the place (warts and all), along with the history and the people.

VH: Part of this is the very visceral sense of belonging here. I think this gives me an affinity with it. And this is not something I can easily explain. The other part is that, because of this sense of belonging, I spend a huge amount of time there, several months every year in fact. I have learned the language, I have many friends in Greece, and I have a house. So, as you say, I can see the “warts and all” as well.

TF: Do you think the blending of a good storyline with photos will start a trend? It seems such an obvious combination, it is strange that it is such a rare phenomenon. Do you think you will do something like this again?

VH: I am certain that it will start a trend. Putting words and pictures together is something that is done for children – and it works for adults too! Imagine how few copies of a newspaper would sell these days if there were not photos? We all love visual images – and though I know the production costs were much higher than for a normal novel, I hope it will be worthwhile for everyone. I would definitely like to do something similar again.

TF: What is next for you in terms of writing and travel?

VH: In the next few months, I will be travelling in the UK, Greece and Norway to promote Cartes Postales, so I will be going to new places and meeting new people which is always exciting and stimulating. And after that I will be starting a new novel.

TF: Could we please have some of your top tips for anyone choosing to visit Greece? Perhaps a couple of your favourite restaurants, too…?

VH: Top tips: Don’t think of Greece as only a summer destination. For walking and seeing the sites, the autumn and spring are fabulous too – because the heat doesn’t sap your energy. The islands are fabulous, but there is plenty on the mainland too – and you will never be stuck in traffic in Greece. Top places are Delphi and Meteora, but there is nowhere in Greece that doesn’t have something to make it worth visiting. Even small towns have beautiful churches and small museums.

I can’t recommend specific tavernas as I have been to so many… but my top snack when I am sightseeing is a circle of bread with cheese melted on top – or bread with olives inside. And in tavernas, it’s always best to choose something from the range of metal pans that are laid out with that day’s dishes. Vegetarian dishes are amazing in Greece too – lots with pulses and beans.

Thank you to Victoria for her wonderful answers! Click here to see her chatting about how the book came together!

Tina for the TripFiction team