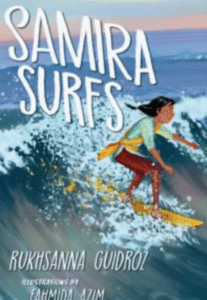 Five years ago, my husband had a brilliant suggestion. He thought I would enjoy reading the article “In Search for Nasima” in The Surfer’s Journal. He said it over and over until one day I did. He was right. But more than that. The story grabbed me by the heart and wouldn’t let go. That’s when I knew I had to take the inspiration I clearly felt and write a story for children. After researching, doing interviews, writing, rewriting, and surfing, I am thrilled to say my book hits bookstores on 29th June. Samira Surfs is a novel in verse about Samira, an eleven-year-old Rohingya refugee living in Cox’s Bazar, Bangladesh, who finds strength and sisterhood in a local surf club for girls.

When I first read the article about the girls who ride waves in Bangladesh, I was immediately struck by their bravery. These surfers were defying societal traditions and religious norms by taking to the water to surf. The piece focused on a young girl who I later found out was Rohingya. Rohingya is one of the many ethnic groups that live in Myanmar. I felt compelled to discover more about these predominantly Muslim people.

Rohingya history is one of instability, discrimination, and persecution.  Every history book and academic journal I pored over detailed a life of hardships. Yet despite their challenges, Rohingya have displayed an incredible amount of strength and perseverance in their quest to maintain their identity and basic human rights. I consulted an aid worker who spent time in the refugee camps and a doctoral researcher who studies refugee issues worldwide. The more I learned, the more I was drawn in by the story of Rohingya as a people. I read websites by NGOs and aid agencies late into my nights to double, triple, quadruple-check statistics, facts, and reports.

Myanmar, formerly known as Burma, was under British rule from 1824 to 1948. During WWII, Rohingya sided with the British, so when British rule came to an end, Rohingya believed they would be granted the right to self-government. Instead, minority Rohingya were left powerless and with no autonomy. The majority Buddhist Burmese population, who had sided with the Japanese during the war, seized the opportunity to oppress their fellow citizens.

For decades now, Rohingya have suffered at the hands of Myanmar authorities. Many have been brutally attacked or killed by local police and military. In 2017, the violence took a deadly turn when Rohingya homes and entire villages were burned down to the ground. News reports showed thousands of Rohingya fleeing to neighboring countries by foot or boat. Those who managed to escape settled in temporary, overcrowded refugee camps once they arrived at their destination. Most of them hope to return to Myanmar if their basic rights are granted. In the meantime, the dream of going home sustains their daily life.

A story was already beginning to take shape in my imagination. For me, the emotional arc of any story is its heartbeat, so I had to imagine what it would be like to stand in Samira’s shoes. Losing your home, family, identity, and sense of belonging are profound moments in a person’s life. I wanted to know how that looked and felt. However, my main idea was to explore a narrative where Samira and her family rebuild their lives after losing everything. Given their circumstances, how could they find the strength and inspiration to start afresh in a new country? 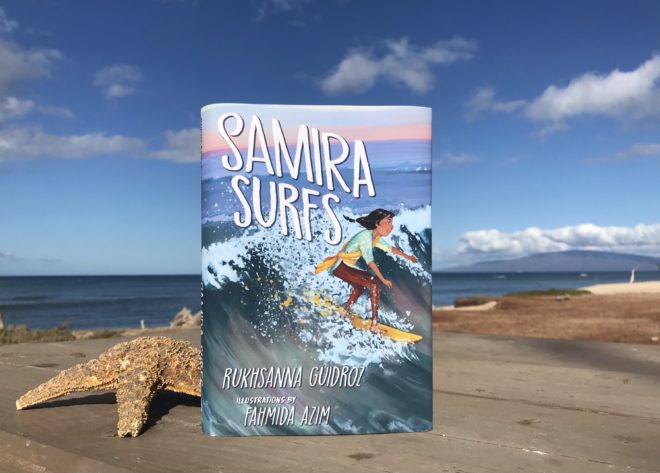 While writing my novel, I got in touch with the Bengali lifeguard and tutor who work with the young surfers in Bangladesh, as mentioned in the article. I have spent time in Pakistan and India, but not Bangladesh. After consulting with them, I was better able to fully understand the significance of being a female surfer in Bangladesh. The details they shared helped me paint a picture of the specific constraints a girl would experience in this popular tourist destination.

Making contact with Rohingya refugees was also a priority. With more digging, I found four who were willing to help. They confirmed details of their culture, language, and life experiences with me. The story I had created, while fictional, felt grounded in a reality that reflected the emotional and physical journey of a refugee.

As most of my readers are between the ages of 8-12, I wanted to show how Samira finds peace and freedom. Despite enduring loss and sorrow, Samira makes new friends and discovers the joy of playing in the waves. She learns to surf and decides to compete in a surf competition, knowing it will go against her parents’ wishes. Perseverance and determination fuel her newfound passion for surfing, making this refugee story ultimately one of hope and empowerment.

Researching Samira’s Muslim background was easy for me because I was raised in a part-Muslim household. While my father was relaxed about adhering to certain customs, the characters in my story are bound by their faith. But Samira and her friends build a foundation for self-expression and freedom by negotiating and breaking through some of those cultural barriers.

Writing a novel in verse allowed me to create an intimate space as the reader becomes immersed in Samira’s mind and heart. The verses use the language of emotion and self-reflection, and this sincerity invites the reader to feel the story. Each line has rhythm and beat, which further enhances the reader’s experience as the narrative unfolds.

Surfing was one of the most enjoyable parts of my research. For the story, I drew on my personal experiences of learning to surf in Hawaii, where I live. Every ache in the neck, scary wipeout, scrape on the knee, and knock on the chin that Samira had, I’ve had too! The learning curve for surfing has been a long one for me. While I have accepted that I may be a life-longer beginner, I am grateful that I can share the journey of learning to surf. Riding waves is what brought this story to me. And, of course, my husband’s brilliant suggestion.

Rukhsanna Guidroz, author of Samira Surfs, Mina vs. the Monsoon and Leila in Saffron. 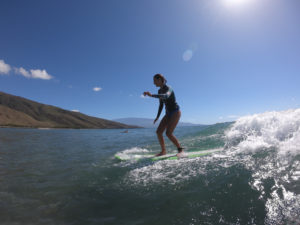 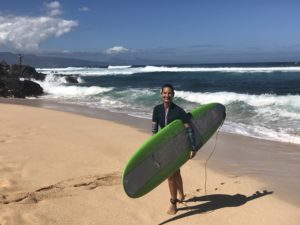 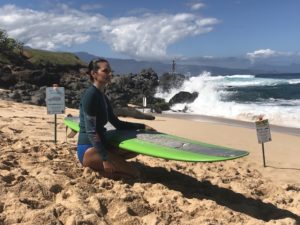 Samira Surfs (Kokila, 2021), written by Rukhsanna Guidroz with illustrations by Fahmida Azim, is a tender novel in verse about a young Rohingya girl’s journey from isolation and persecution to sisterhood, and from fear to power. 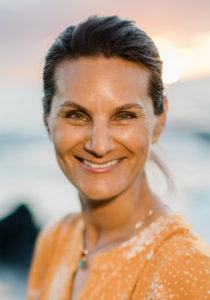 Rukhsanna Guidroz was born in Manchester, England. With a Persian-Indian father and a Chinese mother, Rukhsanna was always drawn to traveling to faraway places. After studying French at King’s College, London, and political science at the Sorbonne, Paris, she left for the steamy shores of Hong Kong. There, she worked as a reporter for the Hong Kong Standard daily newspaper, and later as a producer of the current affairs show Hong Kong Today for RTHK’s Radio 3. She also wrote features for in-flight magazines for China Airlines, Qantas, and Emirates. Inspired by all her life experiences from Europe to Asia, and now to Hawaii, Rukhsanna has many written adventures to share. She now lives in Maui, Hawaii where she’s taken up surfing. Learn more about her at www.rukhsannaguidroz.com

Thriller set in Spain, both in the past and in the present

Thriller set in Spain, both in the past and in the present

Zahara and the Lost Books of Light by Joyce Yarrow – thriller set in Spain, both in the past...

What’s in a book cover?

What’s in a book cover?

Memoir set in the ANDAMAN SEA

Memoir set in the ANDAMAN SEA

Five Great Books set on a cruise. It’s still pretty hard to travel. So if you are a cruise...

GIVEAWAY: it’s all about JAPAN

GIVEAWAY: it’s all about JAPAN

Giveaway: it’s all about Japan. With the Olympic Games 2020 in full swing, we thought you would love to...

The Tiny TripFiction Summer Giveaway. To mark the start of summer and the publication of Nightfall in New York,...