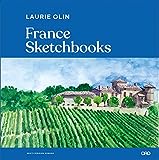 For centuries artists and designers have recorded places, people, and life in travel sketchbooks. Over a period of fifty years, Laurie Olin, one of America’s most distinguished landscape architects, has recorded aspects of France: its cities and countryside, streets and cafés, ancient ruins, vineyards, and parks – from humble to grand, things that interested his designer’s eye – taking the time to see things carefully. Paris in its seasons, agriculture in Provence and Bordeaux, trees, dogs, and fountains, all are noted over the years in watercolour or pen and ink.

Originally intended for the pleasure of merely being there as well as self-education, this personal selection from his many sketchbooks is accompanied by transcriptions of notes and observations, along with introductory remarks for the different regions included: Paris, Haute Loire, Provence, Haute Provence, Normandy, Aquitaine, and Entre des Meures.

In Foreign Fields: How Not To Move To France

This is a lovely hardback coffee table book, a collection of sketches and drawings carried out by Laurie Olin over the last 15 years. He has travelled extensively, a true citizen of the world...