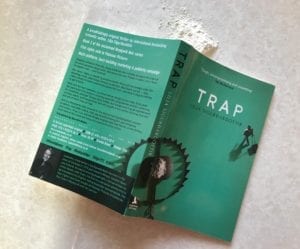 Trap is second title in the Reykjavik thriller series by Lilja Sigurðardóttir. We reviewed the first, Snare, back in October 2017. Trap is every bit as good as Snare. It features the same characters and takes them forward to the next stage of their life adventure. As I said in my last review ‘I suspect Lilja is setting the scene for the next book in the series’. I could say the same again… And I am looking forward to the third book.

The story opens with Sonja and her son Tómas in Florida, on the run from her ex-husband and drug runner, Adam. Adam tracks them down and ‘escorts’ them back to Iceland where he takes Tómas to live with him and uses him as a bargaining chip to get Sonja to bend to his will – and go back to being a drug mule. Sonja’s lover, Agla, is one of three senior bankers being investigated for money laundering and fraud on an industrial scale – their plans went wrong as the financial crash hit. She is embarking on a dangerous scheme to clear a massive debt they built up with a somewhat less than desirable lender. Agla travels to the financial capitals of Europe to progress her scheme, and Sonja travels to Greenland, London, and Mexico as the drugs plot moves on. She is protected each time she flies into Reykjavik by Bragi, an about to retire customs officer with a terminally ill wife in her pay… There is much fast moving action… All the time, though, Agla is plotting to be with Sonja, and Sonja is plotting to get Tómas back – and put Adam behind bars. Lots of double crossing (and a fair amount of violence) going on…

Trap is an exciting book, and Lilja is a real addition to the ranks of Icelandic Noir writers. For a small country (only 340,000 inhabitants) there is a lot of talent around.