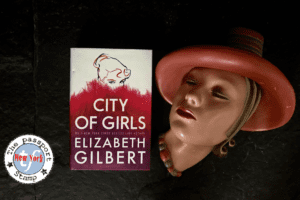 Eat Pray Love (set Italy / India / Bali) by the same author was one of the novels that first inspired the concept of TripFiction “travel for the price of a book”. So it is always wonderful to engage with an author’s work several years hence.

As the book opens, Vivian Morris is narrating her story in the present day, telling someone called Angela about her life and times in New York, back in the day. We find out the connection between the two at the end of the novel.

“Fun City” (I use that epithet for the city but it didn’t come into regular use until the 1960s – it’s very pertinent for the story, however) sees Vivian, just turned 19, living with her eccentric Aunt Peggy above the Lily Playhouse. Vivian has been sent to the city after flunking her education. However which parents would despatch their daughter to a relative who has a coterie of wayward showgirls, actors and singers, living the louche but fabulous life in the Big Apple?

Vivian is a trained dressmaker and seamstress and creative with it. These skills are perfect for creating the performers’ costumes, she thus has a role at the Lily Playhouse and they certainly hold her in good stead as her life unfolds.

The narrative bowls along and just at the point where I felt it flatlined a little, something happens which moves everything into a new trajectory. As war unfolds and America becomes involved there is yet another seismic shift.

This is the story of a young woman who is intoxicated by the freedom and scintillating lifestyle that is on offer in the city. Yes, she sleeps her way through a lot of men, which is tastefully described; and ultimately – via shame, violence, profligacy and humiliation – she neverthrless develops quite a sense of self. This is a portrait of a woman set at a time of major upheaval in society and is as much about place as it is about the human condition. A thought provoking read.