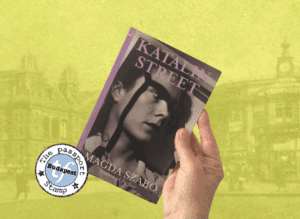 There is a part of us that wishes time would stand still at some point in the past so we can dwell in a period, enjoy it again and fix our mistakes, do things differently. For the characters of Katalin Street, this period is the 1930s, when life was simple and cohesive and troubles were few, before war and occupation and uprising beset the nation of Hungary, and the ancient streets of Budapest.

Set in the 1930s to the 1960s, Katalin Street is narrated in carefully woven fragments from the perspectives of three families’ children, through the gazes of Irén and Blanka, and Henrietta, and Bálint. Fatalism and stoicism are juxtaposed with various forms of rebellion and recklessness as these three families – headed by a headmaster, a Jewish dentist and a major – struggle to cope with the changes going on all around them. Depictions of family life, the worries and foibles, the clashing temperaments, the games, the birthday party, the primary school gold cards so coveted by Irén, all the normal events of childhood, all the innocence is fast swept away by the horrors of war and is replaced by a sense of domestic incarceration, almost claustrophobia as lives shrink.

In reading Katalin Street, a deep ache grows in the heart as the pages turn, at first an unease, then the surety that some cataclysm will shatter lives and psyches and haunt the memories of those remaining so that nothing normal is left, of it it’s left it’s tainted or unreachable. This is a moving tale of collective trauma, of astonishing bravery, self-sacrifice and resilience.

The real mastery of the author lies in the manner of storytelling. For Katalin Street is written in a subtle and nuanced fashion. The focus is domestic, intimate, the concerns familial, and the historical context is mentioned and shown in the least invasive manner, as though the author wishes almost to protect her characters, allow them to breathe and reveal themselves on the page. Nevertheless, Katalin Street provides a good sense of place, one that grows in the imagination and will stay with the reader long after the last page is turned.

There can be no doubt that Szabó inhabits a refined literary space and the translation is excellent.