The Widows of Malabar Hill by Sujata Massey, a mystery set in 1920s Bombay.

This is the first novel I have read by Sujata Massey and she is a prolific writer who has set her novels in many wonderful places – Japan, USA, India…. Her experience of the locations clearly comes through in her masterful writing skills. 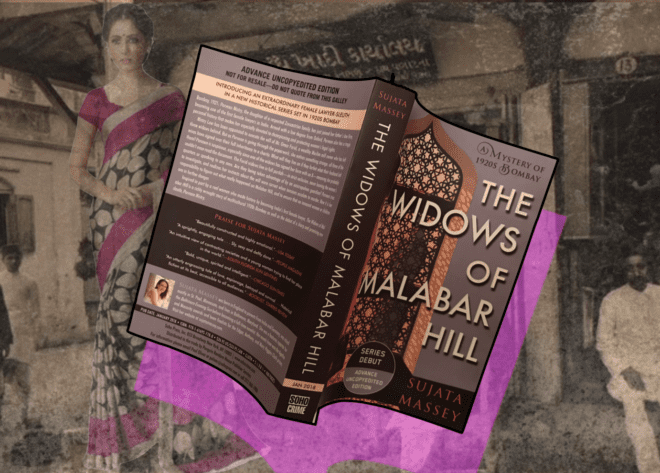 The central character of Perveen Mistry was inspired by India’s earliest women lawyers who struck out to study and qualify at a time when women were heavily censored in what they could do and how they should behave.

Perveen is the daughter of a well established lawyer who has been practising for many years in Bombay and who has a reputation for thoughtful and highly competent litigation. She is fortunate to be part of a forward thinking family who respects women when, all around, women are suppressed and abused. She thus attends college in Bombay but finds herself subject to mysoginy and bullying, and eventually goes on to finish her training at St Hilda’s in Oxford.

The three eponymous widows of the title – Sakina, Razia and Mumtaz – living on Malabar Hill, have lost their joint husband and are having to contend with a newly installed household agent, Mukri. They are in Purdah, a period lasting 4 weeks and 10 days, following the death of their husband. They live in the zenana, a part of the house for the seclusion of women, where no men (other than a husband of course) are allowed. Following a murder in the household, the normal investigative processes, carried out by men, cannot take place. It falls to Perveen to untangle the complex scenario of the hidden wives…

Meanwhile Perveen also has her own personal issues to address in the form of handsome Cyrus Sodawalla.

There is a great mystery to explore in this book, as the author gently develops the storyline. She is adept at describing the mores and culture of the time, which is fascinating. Perveen is a Parsi, a minority group descended from the Zoroastrians of Persia. Her family may have migrated to India maybe 500/700 years ago. And it was in the 17th Century that the British called on the Parsis to leave Gujurat and travel to Bombay and “build up an old, ruined Portuguese Fort into a modern walled city“. Cyrus would in theory seem a suitable match for her, as he is Parsi too.

Importantly the author exposes the oftentimes miserable lives of women, living just 100 years ago. Echoes abound still today. She looks at the practise of Binamazi, menstrual seclusion, where a menstruating woman has to be kept away from other members of the household because she is ‘unclean’. But the confinement also means no access to clean water to wash and therefore compounds the notion of uncleanliness – a character even dies when in seclusion, as her underlying illness went unheeded by other members of the family.

There are more nuggets of interesting information; it can feel at times slightly didactic but I love discovering interesting episodes and facts… fingerprinting science began in India;  black dots painted on babies protect against evil… who knew!

Concerns about drink/driving are voiced, and guidebooks to cities are readily available in households, and I wonder whether those are elements which may have crept in through a 21st Century lens? There is, however, overall a tremendous sense of 1920s Bombay, a dangerous city for women on their own. Helpfully, there is a map at the beginning of the book where one can see how various locales relate to each other.The characters even pop to Yazdani Bakery to eat cardamom buns and many more mouth-watering delicacies (and from the descriptions I will definitely go to eat cake there when I go to Mumbai!).

A very enjoyable and sobering read that just took me to the streets of 1920s Bombay, all within a credible and well put together storyline. Recommended.

For more books to transport you to Mumbai/Bombay, just access the TripFiction database

Greek Island Escape by Patricia Wilson, novel set mainly on Crete past and present. The novel opens in the...

We are delighted to offer 3 copies of Scent by Isabel Costello – a novel of Perfume, Paris and Provence....

The Lost Women of the French Revolution by Kat Dunn. On 5 October 1789, nearly seven thousand women –...

Just how important is Social Media for an author? I recently saw a thread posted on Twitter by Little...

#TalkingLocationWith…. Sharon Bolton, author of The Pact – Oxford Twenty years ago we moved to the outskirts of Oxford....

#TalkingLocationWith… Katy Moran, author of Scandalous Alchemy set in Fontainebleau, France. I first came to Fontainebleau by train in...