#TalkingLocationWith... Ken Langer, author of A Nest for Lalita – VARANASI

My new novel, A Nest for Lalita, channels a fifty-year relationship with India. It all started during my freshman year of college, when, at the University of Wisconsin, I took a course in the Yoga Sutras—a 4th CE century treatise on the science of yoga. Not the postures, as most Westerners think of yoga today, but stilling the mind to find inner peace and, if one is lucky, a taste of enlightenment. Reading these sutras (pithy aphorisms that lend themselves to memorization) transformed me. I started studying Sanskrit and, before I knew it, was flying to Varanasi – the holy city on the Ganges – for my junior year in college. After college and a Ph.D. in Sanskrit and Indian studies at Harvard University, I spent two years in Pune, a college town southeast of Mumbai, as a post-doctoral fellow and, many years later, I lived in New Delhi helping US hi-tech and renewable energy companies explore business opportunities.

Of all the places in India, Varanasi (earlier known as Benares) has always been closest to my heart. It is a city literally teeming with life. Above is a photo of my in my college (hippie) days sitting on the ghats, the miles-long steps that lead from the city to the Ganges.

Last February, I traveled to Varanasi after five decades. Every evening a Hindu ritual is performed and it consists of priests chanting Sanskrit verses from the Vedas, Hinduism’s most sacred text, and waving censers filled with incense to purify the surrounding air.  As you can see from all the iPhones, this nightly performance has become quite the tourist attraction!

One of the highlights of my recent trip back to Varanasi was trying to find the home of Kedar Nath Bhowmick, a mathematics professor at Benares Hindu University, who was a highly proficient amateur tabla player.

Kesh sunk onto the bed as the downy tones of a bamboo flute swelled throughout the room. Then came the tabla, 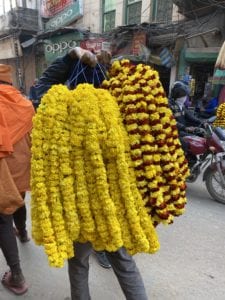 One of the joys of wandering through the ancient narrow streets or “gullies” of Varanasi is seeing the merchants and their wares. Like a medieval European city, block after block is given to a particular product, such as sandalwood carvings, saris, or pots and pans. As one meanders past cows and goats, one sees women in saris with brass pots on their heads, people stopping to do puja (prayer) to any number of local deities that are placed in building niches or at the foot of trees, food vendors, and more.

In many ways, Varanasi is still the city I knew back in the 1970s – and even the city of a thousand years ago. With one exception, the traffic. Like most Indian cities, Varanasi has become congested with cars and scooters, all of which seems to be honking their horns constantly and simultaneously. It was as if all the quiet bicycle rickshaws that slowly and peacefully wheeled their way through the streets with the occasional ring of a bell have been reincarnated as deafeningly loud motorized vehicles. Varanasi is the home of the Shiva, but I suspect the god of meditation abandoned the city long ago for his mountain retreat. Nevertheless, a visitor can still experience the old city if he or she goes off the beaten track. Meandering the ghats along the sacred Ganges and roaming the ancient gullies is still an otherworldly experience.

A Nest for Lalita by Ken Langer is available through TripFiction and at all online booksellers. Published by Dryad Press £12.00

#TalkingLocationWith ... Caroline Beecham, author of When We Meet Again set in the publishing worlds of LONDON and NEW...

GIVEAWAY – 3 copies of The Meeting Point set in CALIFORNIA

GIVEAWAY – 3 copies of The Meeting Point set in CALIFORNIA

We are delighted to offer 3 copies of The Meeting Point by Olivia Lara, romcom set in CALIFORNIA. Open UK...