Virginia Medical Examiner Kay Scarpetta has a bloody puzzle on her hands: five headless, limbless cadavers in Ireland, plus four similar victims in a landfill back home. Is a serial butcher loose in Virginia? That’s what the panicked public thinks, thanks to a local TV reporter who got the leaked news from her boyfriend, Scarpetta’s vile rival, Investigator Percy Ring. But the butchered bodies are so many red herrings intended to throw idiots like Ring off the track. Instead of a run-of-the-mill serial killer, we’re dealing with a shadowy figure who has plans involving mutant smallpox, mass murder, and messing with Scarpetta’s mind by e-mailing her gory photos of the murder scenes, along with cryptic AOL chat-room messages. The coolest innovation: Scarpetta’s gorgeous genius niece, Lucy, equips her with a DataGlove and a VPL Eyephone, and she takes a creepy virtual tour of the e-mailed crime scene.

Unnatural Exposure boasts brisk storytelling, crackling dialogue, evocative prose about forensic-science sleuthing, and crisp character sketches, both of familiar characters like Scarpetta’s gruff partner Pete Marino and bit players like the landfill employee falsely accused by Ring. Plus, let’s face it: serial killers are old hat. Cornwell’s most vivid villains are highly plausible backstabbing colleagues like Ring, who plots to destroy Lucy’s FBI career by outing her as a lesbian. Some readers object to the rather abrupt ending, but, hey, it’s less jarring than Hannibal‘s, and it’s the logical culmination of Cornwell’s philosophy about human nature. To illuminate the novel’s finale, read Cornwell’s remarks on paranoia in her Amazon.com interview. 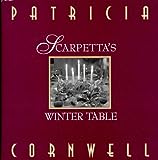 GIVEAWAY – 3 copies of Fifty Words for Snow (UK entry only)

GIVEAWAY – 3 copies of Fifty Words for Snow (UK entry only)

Giveaway – 3 copies of Fifty Words for Snow by Nancy Campbell Absolutely exquisite. This little book is a work...

Walking with Glenn Berkenkamp, set mainly across the USA. During 2020 many of us have taken to walking to...

#TalkingLocationWith... Kim Nash, author of Sunshine and Second Chances, romantic comedy set in the ALGARVE I chose The Algarve...

“Secret Britain” by Mary-Ann Ochota – unearthing our mysterious past

“Secret Britain” by Mary-Ann Ochota – unearthing our mysterious past

Secret Britain by Mary-Ann Ochota – Unearthing our Mysterious Past. “A cornucopia of our weirdest and most wonderful archaeological...