TalkingLocationWith… Cath Staincliffe, author of Running Out Of Road, set in the PEAK DISTRICT

Escape To The Hills

Running Out of Road, my latest novel, was inspired by the Derbyshire Peak District, south east of Manchester where I live. It’s the story of eleven-year-old Scarlett, abducted by her estranged father and driven up into the hills with the police in pursuit. The action unfolds over a few hours on an inclement February evening, as Storm Dennis barrels in from the north bringing floods and ensuing chaos. This remote landscape can be unforgiving, especially if you’re not properly equipped. Some of my characters are city born-and-bred and find the countryside a terrifying prospect, while others feel at peace there and have deliberately sought it out. Their paths cross with Scarlett’s on this fateful night. 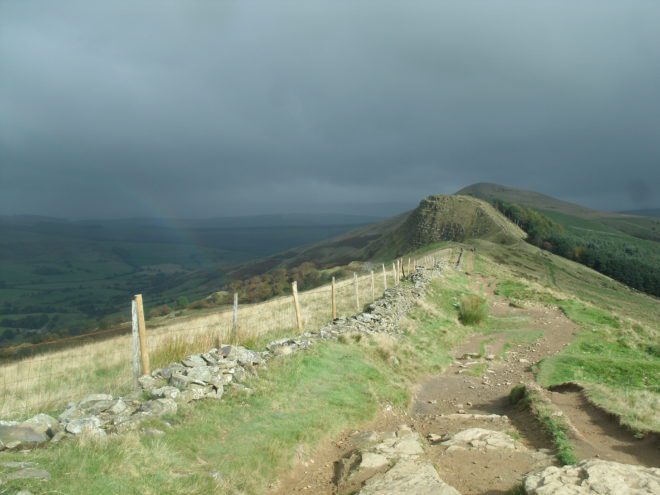 I grew up walking in the Yorkshire Dales on day trips from nearby Bradford with my family. At the southern end of that Pennine Chain lies the Peak District National Park, the first designated National Park in 1951, as I discovered when I moved to Manchester. The White Peak in the south is riven by steep limestone valleys, the Dark Peak in the north is gritstone, rugged and often bleak. The area boasts popular walking spots like Mam Tor, the Monsall Trail and Stanage Edge where millstones were carved, some of which still litter the hillside, now a popular spot for rock climbers. Kinder Scout, the moorland plateau is highest point in the Peak District, and the same latitude as Siberia.

1932 had seen the Kinder Mass Trespass, organised by ramblers and the Young Communist League agitating for freedom to roam. One of those trespassers was renowned folk singer Ewan MacColl, and that action inspired his song The Manchester Rambler. Take a look at the lyrics, they’re brilliant and still relevant today. I was lucky enough to meet another of those early activists, Bella Costello, who was a neighbour of mine in Manchester.

We often went camping there when the children were small, and it’s where I go now for regular hill walks; a space to recharge and set my worries aside, a sanctuary when life becomes overwhelming. Up in the hills I find a different pace, a different type of energy. Walking gives me a rhythm that encourages meditation, contemplation. I often find myself working out plots, or musing about characters as I roam. And when I’m feeling low or anxious, or at times when I have lost someone, there is a healing that comes with being out in nature. With losing yourself in something greater.

The Derbyshire countryside with its sweeping valleys and limestone escarpments, caves and gorges, dry-stone walls, hill farms and moorland plateaus, is breath-taking. There’s a simple pleasure in seeing cotton grass nodding in the breeze or watching a hawk hover, or blue butterflies dance. In fording a fast-flowing stream and climbing the last few feet to gain the hilltop, or enjoying a flask and a picnic huddled in the lee of limestone boulders. Even in bad weather, when the terrain can seem ominous and brooding, I find pleasure in those walks (but I do admit to having excellent waterproofs, and stout boots and hiking poles). I come back home refreshed, usually aching a little (I’ve arthritis), pleasantly tired, at peace. 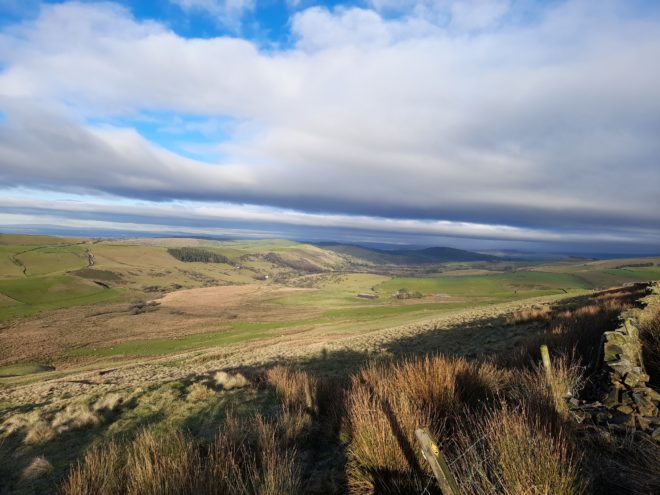 However, there was one obstacle I hadn’t expected when I began writing – the continuing ban on travel which came into effect here swiftly after the first lockdown was lifted. I could no longer visit the Peak District. My only walks were close to home, around municipal parks and local nature reserves.

Nevertheless, I felt so grateful that I was writing a book set in the hills because it allowed me to escape there in my imagination, to get away from the grim news of the pandemic, Brexit and the climate emergency, and lose myself in Scarlett’s adventure. I relished exploring the terrain through the eyes of the various characters in the novel, and being able to capture some of the beauty and grandeur of the setting.

And now I’m back. Savouring the chance to ascend a limestone ridge and see the land fall away to the horizon. To watch the clouds sweep in from the west. To smell the heather and taste bilberries, follow the dry-stone walls, crusted with lichen, that criss-cross the lower slopes, and see the blue sky reflected in pools in the black peat. To feel close to the heavens with my feet on the earth. And to savour that unforgettable spiralling song of skylarks high above. My boots ready and waiting.