Do you like it when a book you’ve really enjoyed reading becomes a great film too? Or would you like the original art form to be untainted by the big screen? Or which films have you enjoyed watching that have been adapted from books that you haven’t already read? Do you like to read the ‘book of the film‘ first, or are you happier seeing the book brought to life, before going back to read the story that inspired a movie?

In the first of an occasional series, we look at five GREAT books that we think also became GREAT films.

1. Empire Of The Sun – set in SHANGHAI

The classic, heart-rending story of a British boy’s four year ordeal in a Japanese prison camp during the Second World War.

Based on J. G. Ballard’s own childhood, this is the extraordinary account of a boy’s life in Japanese-occupied wartime Shanghai – a mesmerising, hypnotically compelling novel of war, of starvation and survival, of internment camps and death marches. It blends searing honesty with an almost hallucinatory vision of a world thrown utterly out of joint.

Rooted as it is in the author’s own disturbing experience of war in our time, it is one of a handful of novels by which the twentieth century will be not only be remembered but judged.

Based on J. G. Ballard’s autobiographical novel, the film tells the story of a boy, James Graham, whose privileged life is upturned by the Japanese invasion of Shanghai, on December 8, 1941. Separated from his parents, he is eventually captured, and taken to Soo Chow confinement camp, next to a captured Chinese airfield. Amidst the sickness and food shortages in the camp, Jim attempts to reconstruct his former life, all the while bringing spirit and dignity to those around him.

In January 1952, two young men from Buenos Aires set out to explore South America on a 500cc Norton. One of them was the twenty-three-year-old Ernesto ‘Che’ Guevara.

Written eight years before the Cuban Revolution, these are the diaries of Che Guevara, full of disasters and discoveries, high drama and laddish improvisations. Touring through Argentina, Chile, Peru and Venezuela, his greatest concerns are where the next drink is coming from, where the next bed is to be found and who might be around to share it.

Within a decade Che Guevara would be a household name. His trip might have been the adventure of a lifetime – had his lifetime not turned into a much greater adventure.

Their quest is to see things they’ve only read about in books about the continent on which they live, and to finish that quest on Alberto’s thirtieth birthday on the other side of the continent in the Guajira Peninsula in Venezuela. Not all on this trip goes according to their rough plan due to a broken down motorbike, a continual lack of money (they often stretching the truth to gain the favor of a variety of strangers to help them), arguments between the two in their frequent isolation solely with each other, their raging libidos which sometimes get them into trouble, and dealing with Fuser’s chronic asthma.

But a chance encounter with a couple of Communists in the Chilean desert and an extended visit to the San Pablo Leper Colony in the Perúvian Amazon Basin among other things profoundly affects what each will want to do with his life and the bond each has with the other.

3. The Shipping News – set in NEWFOUNDLAND.

Quoyle is a hapless, hopeless hack journalist living and working in New York. When his no-good wife is killed in a spectacular road accident, Quoyle heads for the land of his forefathers — the remotest corner of far-flung Newfoundland. With ‘the aunt’ and his delinquent daughters — Bunny and Sunshine — in tow, Quoyle finds himself part of an unfolding, exhilarating Atlantic drama.

‘The Shipping News’ is an irresistible comedy of human life and possibility. 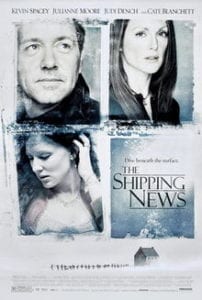 An inksetter in New York, Quoyle returns to his family’s longtime home, a small fishing town in Newfoundland, with his young daughter, after a traumatizing experience with her mother, Petal, who sold her to an illegal adoption agency.

Though Quoyle has had little success thus far in life, his shipping news column in the newspaper “The Gammy Bird” finds an audience, and his experiences in the town change his life. Then he meets the widow Wavey…

On the hottest day of the summer of 1935, thirteen-year-old Briony Tallis sees her sister Cecilia strip off her clothes and plunge into the fountain in the garden of their country house. Watching her too is Robbie Turner who, like Cecilia, has recently come down from Cambridge.

By the end of that day, the lives of all three will have been changed for ever, as Briony commits a crime for which she will spend the rest of her life trying to atone. 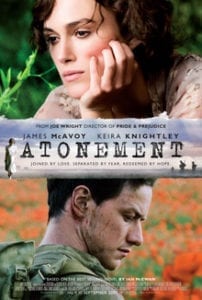 When Briony Tallis, 13 years old and an aspiring writer, sees her older sister Cecilia and Robbie Turner at the fountain in front of the family estate she misinterprets what is happening, thus setting into motion a series of misunderstandings and a childish pique that will have lasting repercussions for all of them.

Robbie is the son of a family servant toward whom the family has always been kind. They paid for his time at Cambridge and now he plans on going to medical school. After the fountain incident, Briony reads a letter intended for Cecilia and concludes that Robbie is a deviant. When her cousin Lola is raped, she tells the police that it was Robbie she saw committing the deed.

Do you know your desert-island, all-time, top five most memorable split-ups?

Rob does. He keeps a list, in fact. But Laura isn’t on it – even though she’s just become his latest ex. He’s got his life back, you see. He can just do what he wants when he wants: like listen to whatever music he likes, look up the girls that are on his list, and generally behave as if Laura never mattered.

But Rob finds he can’t move on. He’s stuck in a really deep groove – and it’s called Laura. Soon, he’s asking himself some big questions: about love, about life – and about why we choose to share ours with the people we do.

High Fidelity follows the ‘mid-life’ crisis of Rob, a thirty-something Chicago record-store owner who must face the undeniable facts – he’s growing up.

In a hilarious homage to the music scene, Rob and the wacky, offbeat clerks that inhabit his store expound on the intricacies of life and song all the while trying to succeed in their adult relationships. Are they listening to pop music because they are miserable? Or are they miserable because they listen to pop music?

This romantic comedy provides a whimsical glimpse into the male view of the affairs of the heart.

Well, do you agree that these memorable books were adapted into equally compelling films? Which GREAT books do YOU think became GREAT films?

Andrew for the TripFiction team