I lived on the Inishowen Peninsula in County Donegal for eleven years, during which I ran the most northerly solicitor’s practice in the country – ‘last legal advice before Iceland’ as a friend of mine joked. Remote and beautiful, with towering headlands and sea stacks, windswept beaches and ancient forts, when I began to write crime novels, I could not have set them anywhere else.

When I moved to Dublin to work as a barrister, I continued to write about Inishowen and my books became a series entitled the Inishowen Mysteries. My protagonist and amateur sleuth Ben (Benedicta) O’Keeffe is a solicitor who runs the most northerly practice in the country – I didn’t go too far for my inspiration!

While the town of Glendara is fictional, many of the locations I use in my books are real. The second book in the series Treacherous Strand begins on a beach overlooking Trawbreaga Bay, so named because of its dangerous and unpredictable tides (bréag in Irish means falsehood or lie; trá bréige is treacherous strand). This beach is on the Isle of Doagh, an island attached to the mainland by a narrow causeway and a beautiful place to walk and birdwatch.

Lagg or Five Fingers Strand with a view of Glashedy Island

Just across the bay is my favourite spot in Inishowen: Lagg or Five Fingers Strand, so named because of the five regal rocks protruding from the sea. Lagg is a long golden beach with some of the highest sand dunes in Europe, overlooked by the looming Knockamany Bends with its breath-taking viewing point. Lagg features in each of my books – it’s where Ben goes for her year-round dips (though I’m always careful to point out that, in reality, it is not safe to swim here!).

Knockamany Bends and the Five Fingers.

Inishowen’s sea-ravaged coastline provides some amazing beaches. Kinnagoe Bay is a wonderfully secluded one which is also the location of the wreck of the Spanish Armada ship La Trinidad Valencera. A plaque has been mounted here in its memory.

The village of Culdaff which features in my third book The Well of Ice also has a beautiful beach, along with a couple of great pubs and McGrory’s Hotel, restaurant and live music venue.

The dunes on Five Fingers Strand.

In The Well of Ice Ben and Sergeant Tom Molloy climb Sliabh Sneacht (Snow Mountain) on Christmas morning and make a grim discovery. Hopefully the same won’t happen to you if you venture up! Sliabh Sneacht is a challenging climb but provides some wonderful views of the twin mounds of King and Queen Mintiagh, Sneacht Beg, Buncrana, Inch and Lough Swilly. And if you’re going to Buncrana, Dunree Fort is well worth a visit. It has a new café.

Although my protagonist Ben lives in the village of Malin, I lived and worked in Carndonagh, a lively town with a diamond surrounded by colourful shops and businesses. You certainly won’t starve here – cafes and pubs abound in Carn! Malin itself is a few miles up the coast with a ten-arched, eighteenth-century bridge and a pretty village green. It boasts the Malin Hotel (although unfortunately it has now closed its doors)  and some more great pubs. 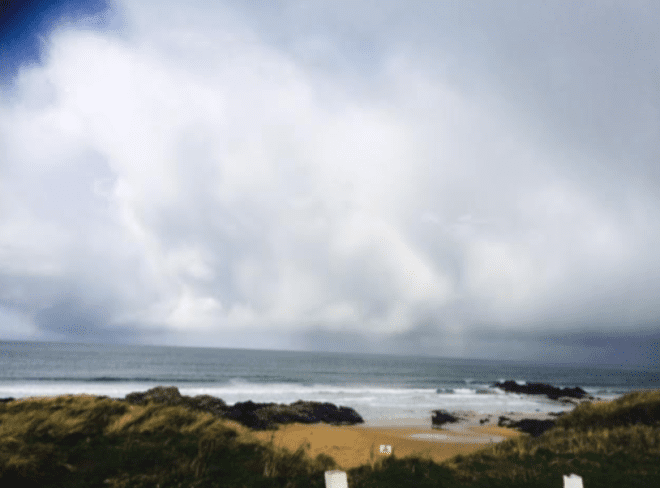 Driving through Malin and past the turn for Five Fingers Strand, you will eventually reach Malin Head, Ireland’s most northerly point and the location of one of the twenty-two weather stations whose reports are broadcast as part of the BBC Shipping Forecast. On the jutting headland that is Banba’s Crown, the word Eire (Ireland) can be seen spelled out in large white stones. This was placed here during the Second World War to let passing planes know that they were over Ireland and that Ireland was neutral. Malin Head is the perfect place for a blustery walk with stunning views.

Finally, overlooking the Foyle, and past the town of Moville you will find the fishing port of Greencastle. From here you can take the ferry to Northern Ireland and Magilligan Point. Ben does this in Treacherous Strand. 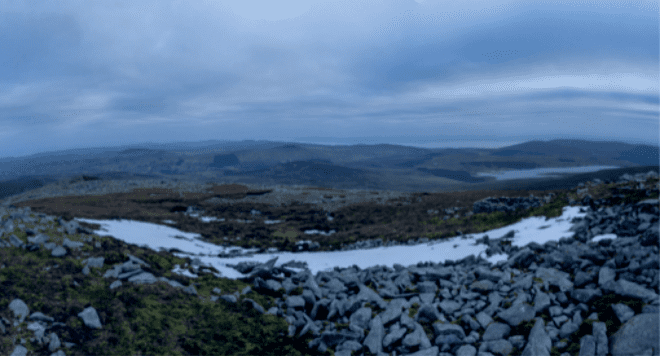 I lived in Inishowen for a long time and still visit regularly, so it is impossible to cover all that I would want to in such a short piece.

Beautiful and windswept, Inishowen is a perfect setting for a crime series but it’s also a wonderful place to visit. Great pubs and restaurants abound, there are world-class golf courses (the 2018 Irish Open takes place in Ballyliffin), you can go whale and dolphin watching, deep sea angling, or (my recommendation) simply take a long, blustery walk on a deserted beach!

Thank you so much to Andrea for such wonderful insights into this remote and beautiful area of Ireland!

Don’t forget you can be in with a chance of winning 1 of 5 copies of her book, just click here

Please do come and join team TripFiction on Social Media:

The Institution by Helen Fields, locked room murder set in a high security facility, I recently read, and really...