My murders take place in Utrecht. Why Utrecht? Basically because my son moved from Amsterdam to Utrecht and it gave me the chance to “research” in the city.

My first crime novel Utrecht Snow was initially based in Amsterdam. Luckily, my son moved to Utrecht. A smaller compact city in the centre of the Netherlands and perfect as a venue for the crimes I envisaged. I have grown to love Utrecht, though a city of over 300000 when the students are there, it seems like a village where everyone seems to know everyone else. Strolling along the canal with my son, he would time and time again meet friends and acquaintances in a way unseen in a city of the same size, say my home in Leicester.

That doesn’t mean to say all Dutch people are friendly. They are like everyone else. In my novel we have a couple of truly unsavoury characters, one in the police and one a general thug. So nowhere is perfect.

Though I have to say Utrecht almost is.

My favourite place in the city is Floras Hof a small, enclosed garden in the shadow of the Dom Toren. During the Summer it is full of the scents of flowers and fruit bushes. In the winter and as in my novel a layer of snow can hide it from view. It is the perfect place to read and eat ice creams brought from around the corner. I have spent hours there writing. It is so peaceful and luckily few people enter its space. 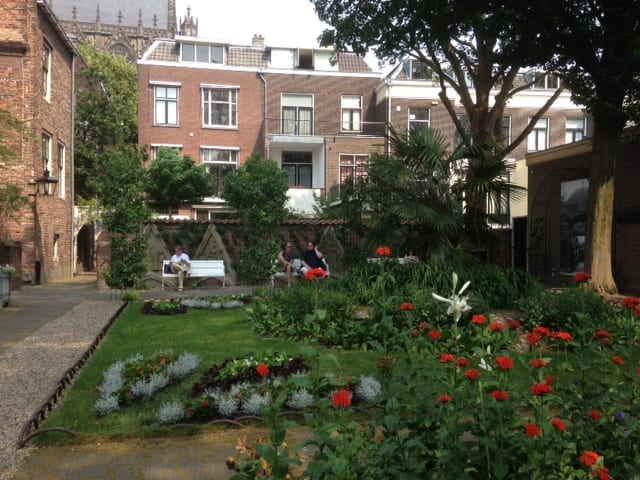 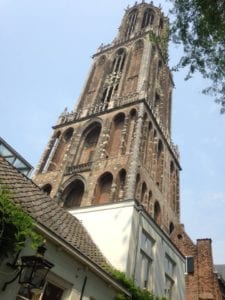 The Dom Toren which overlooks the beautiful Floras Hof is a central place in my second novel Utrecht Rain with an attack occurring in the gateway that was once the entrance. It is also the scene of past romantic liaisons when my other lead character Caes Heda used to race his late wife up the 465 steps to the top.

My wife made the trip up on our last visit and tells me what a wonderful view you get, though she had to have a lie down to recover. It’s a shame that the city council have changed their planning laws which prevented any building being higher than the Dom and plan some office complex to overshadow as well as overlook it.

My hero, Truus Heda loves the Miffy Museum. Better known as the rabbit Nijntje, the Dick Bruna creation can be seen all over the city and is iconic. The museum has just moved, but is a wonderful place for children and adults alike. Truus is able to go there and think about her late mother.

Parts of Utrecht like in any other city, are quite plain. Vaaterstraat, the scene of my murders and kidnapping is a rather non-descript area, with a small dilapidated play area next door to it, but just around the corner lies the canal and awonderful Gothic building. This is what Utrecht is all about, contrasts and beauty.

The bustling Twijnstraat area where the canals meet and the city teems with visitors and pubs, is a wonderful place. There are dozens of cafes and restaurants along the way and people drinking happily in the sunshine and singing are my most recent memories.

That was pre Covid of course. Now the city has become a little quieter as the streets are not so busy. The Railway station, newly refurbished and a glittering prize of the municipality is an event in itself.

Outdoors there is another murder scene, with a body found in the foundations of one of the many new building on Jaarbeursplein. It will be finished by now so I doubt if I would recognise it! Inside the Centraal station is an example to us all in the UK of how a railway system should be run, with trains leaving every twenty minutes for some destinations. Then alongside the twenty odd platforms are high end shops and retail outlets. Indeed you wouldn’t have to leave Utrecht Centraal. All your needs are catered for there. Places that you must go to? I would heartily recommend the Museum, with a fantasmagorian display of musical instruments. My other recommendation is to just take to the cobbled streets and act as a flaneur and see where your feet take you. Everything is so close together som it is no chore. Stop at a café or a pub then start off your investigations again. You might not find a murder victim, but you will experience one of the most beautiful places in Europe.

The Island by C L Taylor, a YA thriller set in Thailand Six teenagers have been around each other...

Haunted Mapgie by Anna Nicholas, murder mystery set on Mallorca. What a wonderful change to have a sleuth who...