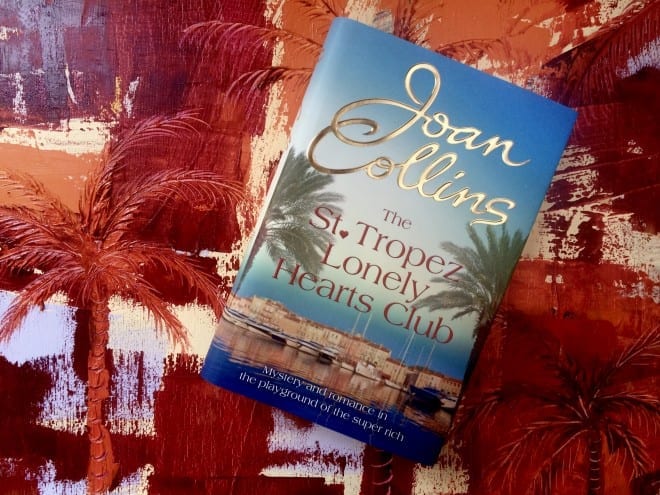 This is the second novel I have read in recent times where mayhem and murder descend on the Côte d’Azur, it is brimming with the antics of the “Eurotrash”, Russians and the British. And both novels have been written by actresses. The first was by Celia Imrie’s “Not Quite Nice” and as you can guess from the title, it is set in Nice. The St Tropez Lonely Hearts Club is in similar vein but is peppered with more rollicking action – in other words, take several ingredients, give them a quick whizz in the blender and out pops a razzmatazz of wealth, murder and wondrous (if rather mind-boggling) events.

There is the lovely Carlotta, a poor peasant who is rescued in Buenos Aires by the superbly handsome Gaucho and they marry in due course. However, he is a master of violent sexual proclivities, but fortunately for her, he pops his clogs one day, leaving Carlotta to take up a new life in St Tropez.

The characters on this exclusive stretch of Paradise in the South of France tolerate each other (up to a point), but just below the surface lurks a tumultuous nest of vipers. When a series of murders blights their often affluent lifestyles, the investigator duo of Captain Poulpe and his daughter Gabrielle descends to tackle the extreme goings-on. The Captain’s tentacles (poulpe after all is French for octopus) can be felt at the scene of every investigation as he peruses and ponders the clues, whilst negotiating the complex dynamics between the characters. These two investigators certainly have a tough job on their hands.

The whimsical role call of names continues with Francois Lardon, and the author spells our the word-play around artist Francis Bacon, should your GCSE level French have let you down….. There are any number of caricatured characters who strut their stuff, from the wizened old soak with her Latino lover (who of course is bristling to find a way out of the relationship), to Charlie the ever popular TV personality back in the UK, and more.  And pop idols aplenty and indecorous Russian oligarchs (of whom veteran screen star Sophie Silvestri says:”… Saint Tropez is full of trash!… And I don’t mean those shabby-looking people wandering around in their ugly cloths. No, the real trash here are the oligarchs – those billionaires with their obscene yachts and the jeroboams of champagne that they spray all over their whores at the beaches and restaurants” – a wonderful if rather depressing image).

And that, in a nutshell is the tenet of the narrative. The question of course, that I would love to pose to Joan is how much of the story is gleaned from personal experience and how much is from the creative mind!

Cafe Sénéquier on Quai Jean Jaurès gets more than its fair share of a look-in as a background setting. Mix in a few possible royals and you have the ingredients for rollicking, ribald and rambunctious romp in the South of France, Summer 2015.

The book was published shortly after Joan’s sister Jackie, who was the mistress of the bonkbuster novel, passed away, and the book is dedicated to her.

For more books set in the South of France, simply click here.