Rituals of the Dead: An Artefact Mystery by Jennifer S Alderson, novel set in the Netherlands and Papua New Guinea.

Once again we join Zelda Richardson, who gave up her job as a multimedia developer at Microsoft, to relocate to Amsterdam and study art history. She currently has an internship at the Tropenmuseum where she is assisting in setting up a forthcoming exhibition of Bis Poles.

Bis Pole at the Tropenmuseum

Bis Poles are artefacts that have been made on Papua New Guinea for generations by the Asmat people, carved during a bis ceremony, a party of many days honouring the life of the dead. The Asmat people believed that an adult couldn’t simply pass away, they put the blame on neighbouring communities and such a festival would end in a headhunting expedition (you can’t say you don’t learn anything!).

There are two timelines, 1962 and 2017. In the early 1960s the area was still under Dutch colonial rule. Many of the items collected and shipped to the Netherlands back then are hopefully to be included in the upcoming exhibition, showcasing the beauty and artistry of the carvings. As the assembled curatorial staff, including Zelda, unpacks crates of artefacts from the period, including human bones – supposedly all Asmat –  a notebook falls out. It transpires that it belonged to Nick Mayfield, who was adventuring and collecting artefacts out in what was then Dutch New Guinea. His disappearance then becomes all the more sinister when a member of the present day team, Janna, the photographer, is murdered.

Father Terpstra was on missionary work in the area in the 1960s and it becomes apparent through photographic evidence that he and Nick were certainly acquainted. He too was a collector of some of the most astounding examples of the art. But it soon becomes apparent that he has something to hide… and he is not the only one.

The Anti-Colonial Brigade also make their views known, after all, the cultural history of the country had largely been stolen – sometimes by devious means. this is clearly a theme close to  the author’s heart.

This is an enjoyable and easy to read story of artefact collectors, with mystery and culture playing an important part.

Do also check out her Facebook Page Travel By Book

Note to Authors and Publishers:

Would you like to see your book featured in our Banner Advertisement selection?

Rituals of the Dead currently appears in our advertising banner, and regularly revolves with the other advertisers featured there. We offer a promotion of one calendar month. If you are interested just get in touch [email protected] 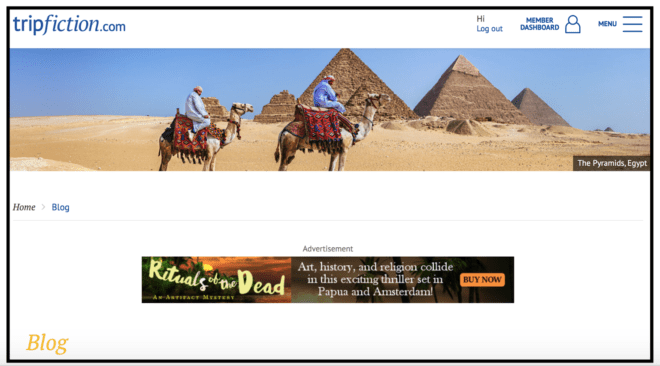