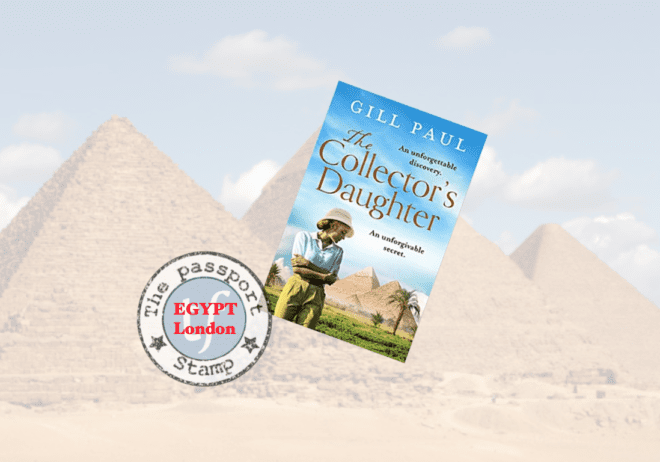 A dual timeline novel that transports the reader from 1970s London back to Egypt and to the discovery of Tutankhamun’s tomb in 1922/23, which had remained undiscovered and sealed for 3000 years. I was delighted to discover this novel because as a child I was fascinated by all things Egyptian, crowned by visiting the Tutankhamun exhibition that came to London and I can still remember the dark setting with a single strobe highlighting the Pharoh’s striking gold mask, studded with gems such as lapis lazuli, quartz, carnelian, turquoise and more, exercising its allure over the modern day gawping visitor.

Lady Evelyn Herbert in 1970s London has suffered a stroke and is fighting to recover her faculties and mobility, with the support of her husband, Brograve. Ana Mansour, an academic from Egypt, has been granted access to the frail woman in order to pose questions about her memories around the opening of Tutankhamun’s tomb, which she attended with her father, the Earl of Carnarvon, who gave financial backing to archaeologist Howard Carter. As we know, he was the person who made the phenomenal discovery, as it turned out. Hers was a societally privileged childhood, living at Highclere Castle (famous now as the backdrop for the Downton Abbey series) but she had to contend with her mother who was more interested in status, society balls, class and finding a fitting marriage partner for her daughter, which all served only to tighten her bond with her father. Eve allowed herself to be swept up in his passion for archaeology which took her away from the sedate and rather dull, traditional society of her childhood.

It was mooted that bad luck would befall anyone who entered Tutankhamun’s tomb. Eve certainly had to contend with more than her fair share of death and tragedy.

The novel really evokes the time and place, and the author has clearly undertaken in-depth research into the manners and mores of the period. There is such rich, colourful detail of Egypt in the early 1920s, as the nation headed towards independence from Britain, and already the ethical and fraught discussions around where the artefacts would be housed were beginning. At the time some items found their way into private hands and the whereabouts of one item in particular forms a small mystery at the heart of the story.

A good and evocative read.