Baba Dunja’s Last Love by Alina Bronsky isn’t a long book, and not much happens, but it is beautifully written, extremely poignant and introduces some memorable characters.

I took Baba Dunja’s Last Love with me #OnLiteraryLocation to Ukraine, for my recent expedition with Explore on their fascinating Discover Chernobyl tour.

Baba Dunja was one of the last to leave in 1986, after the ‘reactor mishap‘ – ‘I helped others to stuff their clothes in sacks, and to rip up floorboards to get at the money they’d hidden underneath.’

At the Chernobyl Museum in Kyiv, and within the 30 kilometre Exclusion Zone around the nuclear plant, we heard how 91,000 people were evacuated at short notice from 76 villages, and saw how these abandoned villages

look now, 32 years later. ‘The buildings are still there, but the walls are flimsy and collapsing, and the nettles grow as high as the eaves.’

Baba Dunja is the first to return to her village. ‘I could have taken the pick of houses in Tschernowo when I came back. I chose my old one.’

Her husband Jegor is dead. Her children have moved away. She understands the consequences of returning, but wants a simple life, looking after her garden and animals.

We were privileged to meet 81 year-old Ivan Semenyuk, living a very similar life to Baba.

Baba Dunja introduces us to the other returnees. Marja, fat and loud: ‘she should never have come here. It’s not the radiation. It’s the peace and quiet that’s so bad for her.‘ 100 year-old Sidorow, who proposes to Baba Dunja, but ends up marrying Marja instead. There’s Petrow – ‘cancer-ridden, from head to foot. His skin is so translucent that I wonder if perhaps he has become a ghost after all.’ And then there are the Gavrilows, the only couple in Baba Dunja’s village.

Ivan is not so lucky. His wife died a year ago. His two children live elsewhere. One son is an alcoholic, and never visits his father. There are only two other single women living back in Paryshyv, but he doesn’t see them that often, especially in the depths of a Ukrainian winter. He stoops, needs a stick to walk with after a recent accident, and struggles to collect logs for his stove from the store in the snow-filled yard.

Counter-intuitively perhaps, wildlife and nature flourish in the Exclusion Zone. ‘In summer, I eat cucumber and tomato salad almost every day. And herbs by the bunch, they grow thick and green in my garden – dill, chives, parsley, basil, rosemary.’ Tending their verdant gardens is important for both Baba Dunja and for Ivan.

An unexpected incident disrupts normal village life for Baba Dunja and her friends. But can anything really be normal again when ‘a biologist explained to me later that the stuff was stuck in my bones and gave off radiation around me so that I was myself like a little reactor.’

I suspect Ivan is more likely to die of old age, than from radiation. He told us that he has no regrets about the decision to return home in 1987, a year after the Chernobyl nuclear explosion. But unlike fictional Baba Dunja, he is lonely now and I can’t help thinking how much he would enjoy the company of Baba Dunja, Sidorow, Petrow, the Gavrilows and happy Marja. 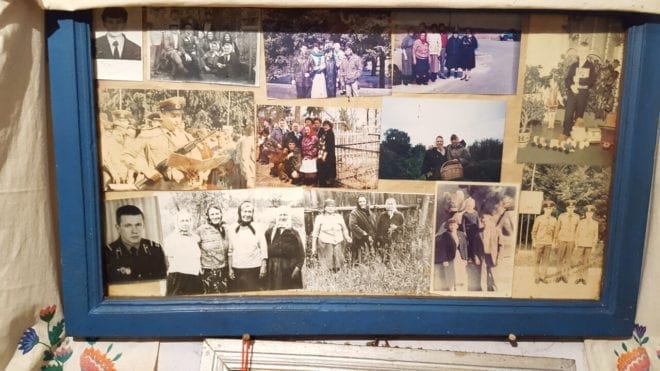 Soon spring will come to Tschernowo. Fresh grass will sprout, the trees will subtly start to green. I will go into the woods and tap birch sap. Not because I want to live to be a hundred but because it is a crime to reject the gifts of nature. The birds will twitter in the blossoming apple trees. The biologist told me why the birds are louder here than elsewhere. After the reactor, more males survived than females. The imbalance persists to this day. And it is the desperate males who belt out their songs in search of good females.’

What a Mother’s Love Don’t Teach You by Sharma Taylor, novel set in 1980s Kingston, Jamaica. This is a...

Thriller set in the Scottish Highlands

Thriller set in the Scottish Highlands

Echo of the Dead by Alex Gray, thriller set in the Scottish Highlands “A remote village. A ruthless killer.” Detective...

#TalkingLocationWith….. Graham Bartlett, author of Bad for Good – BRIGHTON They say write what you know but I think...