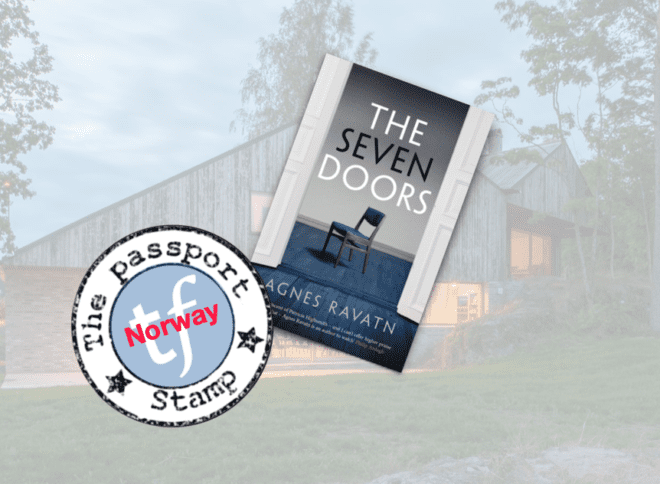 The Seven Doors is the second and much anticipated Norwegian psychological thriller written by Agnes Ravatn (and translated by Rosie Hedger). We reviewed the first, The Bird Tribunal, back in 2016. In many ways, The Seven Doors follows the same sinister lines – and again it works really well.

Nina and Mads are a professional couple living in Bergen. Their house of many years is due to be demolished to make way for ‘essential’ development. They have a daughter married to an oncologist. The daughter, Ingeborg, and her husband, Eirik, are having to move temporarily out of their home while it is being fumigated against an infestation of silver fish. The family own a cottage not far away – rented out to a young lady, Mari, and her son. Ingeborg is determined to have the cottage for herself, and Nina and she make a visit. Soon after their visit the young lady disappears. Has she wandered off, has she made a calculation to leave, or has something more sinister happened to her? It turns out that she is a famous musician fallen on hard times, and that her ex-husband is a famous conductor. He was seen near the cottage on the day of her disappearance, and suspicion naturally rests on him. Nina finds some old papers in the cottage (which the police had missed) and delivers them to Mari’s parents and brother. They seem decidedly odd.

Nina’s investigation follows some false leads and red herrings, until all becomes plain with frightening clarity as the end of the book approaches. The denouement is unexpected.

Atmosphere and pace builds throughout the book. People are devious and plotting, and behave in strange ways and they are oh so convincing!

A great read for anyone looking for a grim, well written (and well translated) psychological thriller.

A story of family life – set in CYPRUS

A story of family life – set in CYPRUS

The Way it Breaks by Polis Loizou, a story of family life – set in Cyprus. The Way It...

Strictly Murder by Julie Wassmer, murder mystery set in Whitstable, Kent. This is no. 8 in the Pearl Nolan...

Dinner with Edward by Isabel Vincent, memoir set in Manhattan and Roosevelt Island. It’s lovely, isn’t it, when an...

GIVEAWAY – 3 copies of This Changes Everything : ROME

GIVEAWAY – 3 copies of This Changes Everything : ROME

We are delighted to offer 3 copies of “This Changes Everything” by Helen McGinn, novel set largely in ROME....

10 MORE Children and YA Books for Refugee Week

10 MORE Children and YA Books for Refugee Week

To mark Refugee Week (14th – 20th June) our Kid’s Lit Writer in Residence had the honour of interviewing...