The Last Wife weaves between two main locations: The New Forest and Ibiza.

Before I even began writing The Last Wife I knew that I wanted to set it within the stunning and vast New Forest area with its winding rivers, ponies running freely, magnificent Giant Redwood trees, rhododendrons, azaleas, the sea, twisting lanes and acres of open heathland. A lot of the stories I read when I was a child involved woods or getting lost among a maze of trees.

The Last Wife is centred around a family home in a fictional, small-ish village within the New Forest. I liked the idea of the protagonist, Marie, picturing this house as the place in which to base her world. While creating the character of Marie, I went to therapy in character, (a service called Characters on the Couch) and I also visited the New Forest area in different seasons and at various times of the day to imagine Marie ‘living’ there.

The New Forest is located near where I live, so not only do I spend a lot of time there cycling or walking with my family, I also love how different it can appear each time I visit. Parts of the area are dense with trees and shade, others are more open, and I wondered what it would be like to be ‘trapped’ in a ‘dream’ house in the woods. The pathways among the trees which are so inviting during sunny, daytime walks, could certainly be transformed at night into a frightening and threatening scene during bad weather or at night. 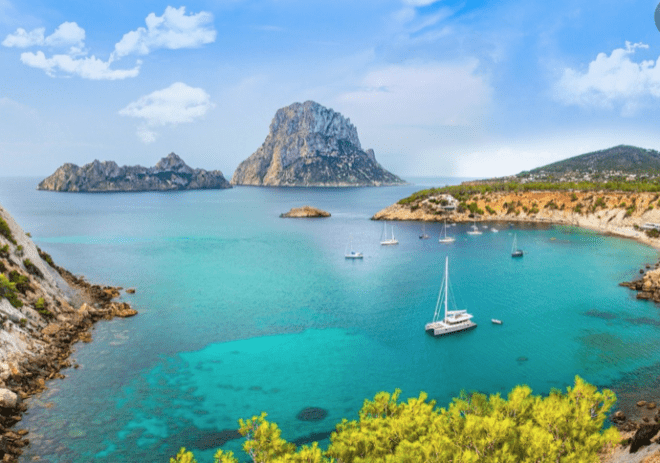 Ibiza features as another setting for The Last Wife because it is one of my favourite islands and places to visit, (although I haven’t visited as recently as I would’ve liked to). It has the most exquisite beaches with turquoise water and the sea is so calm that it can feel like swimming in a pool. There are so many wonderful places to explore and I played with the idea of a younger, more carefree Marie, visiting the island. As it is such a paradise and so chilled, it felt as though it would be impossible for anything ‘bad’ to happen there. (Even though it obviously does in the story).

A holiday in Devon features in some scenes further on in The Last Wife and it’s another place I love and have spent wonderful family times. Many of the roads are very narrow which can make them difficult to navigate, so it would be especially tricky at night for anyone not familiar with the area.  Like the New Forest, the vast Dartmoor area which is so beautiful and exposed in the daytime with its granite tors, bogs, gorse and heather could certainly be disorientating, come darkness. The cottage where the characters stay is fairly isolated.

Overall, one of the most important things to me when it comes to location is to ‘feel’ and ‘see’ the character in the environment I have chosen to write about. That’s when everything I write starts to feel ‘real.’ I try to visit (or revisit) these areas, if I can. I have listed below a few tips which I believe helped me when I first began writing:

Our You Tube review:

To mark Refugee Week (14th – 20th June) our Kid’s Lit Writer in Residence had the honour of interviewing...

10 Children’s and YA Books for Refugee Week

10 Children’s and YA Books for Refugee Week

THE TROUBLE WITH TRUFFLES Tom Benjamin’s The Hunting Season digs up the dirt on the Italian truffle business There’s...

Five years ago, my husband had a brilliant suggestion. He thought I would enjoy reading the article “In Search...

A true story of love, war and Everest

A true story of love, war and Everest

The Moth and the Mountain by Ed Caesar is a true story of love, war and Everest. It tells...