#TalkingLocationWith ... Caroline Beecham, author of When We Meet Again set in the publishing worlds of LONDON and NEW YORK

When We Meet Again is a mystery about a woman’s search for her stolen child. Its inspired by real events, and set in the publishing world of London and New York during the Second World War. It’s the story of a young woman, Alice Cotton, who shows extraordinary resilience as she manages to cleverly combine her search for her missing child with the challenge of creating much needed books during wartime.

The idea for my third novel was inspired by a wartime family secret but when I also discovered the important role books played in wartime—for entertainment, information and escapism—for servicemen and women as well as for civilians, I knew I wanted to include books and publishing as part of the story. The settings in the novel range from London Zoo to the heart of Britain’s publishing industry in Bloomsbury and Fitzrovia, as well as Brighton, an English seaside town. In New York the settings include New York’s ‘Book Row’, a bibliophile’s paradise in the 1940s with its seven blocks of books.

London Zoo
London Zoo stayed open throughout the war and thrived because it was free for servicemen and servicewomen. The general public helped to feed the animals by saving acorns and there are some amazing true stories about the animals and keepers that I’ve included in the book. In the same way that the zoo was a sanctuary for the public during the war, it’s an important place for my protagonist, Alice, to visit and feel safe, as its full of childhood memories.

Some wonderful true stories of Londoners who had to donate their dangerous animals to the zoo because of the risk of them escaping during the Blitz include a lion and an alligator!

New York’s Prospect Zoo, or Brooklyn Zoo, is also featured in  the novel.

Bloomsbury and Fitzrovia – the heart of Britain’s publishing industry

The heart of the publishing industry in London was actually on Paternoster Row, near St Paul’s, until it was bombed in 1940. After that the smaller publishing houses relocated and many moved to Fitzroy and Bloomsbury, where some of the larger publishers offered them peppercorn rent to help them out. This history inspired my story and it’s the setting for Partridge Press, where Alice works. The historic streets, cobblestone alleys and lush green squares are fascinating to wander through and there are various literary guided walks.

Chelsea, ‘The Gates’, and the Bletchley

‘The Gates’, or the Gateway Club, was set in the heart of Chelsea and was a hub for LGBTIQ+ people to socialise during the 1930s and 1940s. It has a fascinating history during wartime and beyond, and it’s an important setting for one of the characters in the novel who had to hide her sexuality. The entrance of the club is at the top of Bramerton Street and isn’t much to look at but you can imagine what went on behind that infamous green door! I visited another nearby club for research; The Bletchley is an underground club on Kings Road, where you dress like the Bletchley codebreakers and crack cryptic codes for cocktails and food!

Most people who have travelled to England have heard of or visited Brighton. Located an hour south of London on the coast, the pebble beaches, stripped deck chairs, and famous pier have long attracted day trippers and holidaymakers. It’s a vibrant city, with lots to offer all ages and purses with access to countryside, the sea and a busy centre of shops, cafes and historic attractions. I grew up in Brighton and my great-grandmother used to run a social club on Brighton seafront and the seed of the idea and some of the characters emerged from there. 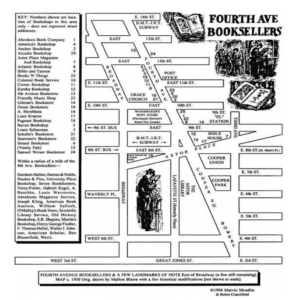 From the 1890s to the 1960s there was an area in Manhattan known as Book Row, from somewhere between Fourth Avenue and Union Square. These seven blocks of books were thriving in the 1940s and it’s an important setting in the novel and where one of the main characters, Theo Bloom, grew up. Now it’s greatly reduced but still home to general and specialist booksellers including The Strand Book Store, Argosy Book Store, and Atlantis.

When We Meet Again by Caroline Beecham is published in North America by G.P. Putnam’s Sons and published as Finding Eadie by Allen & Unwin in Australia and New Zealand
Catch Caroline on Twitter

We Are The Brennans by Tracey Lange, novel set in New York State. This is a debut novel about...

Around the World in 80 Books by David Damrosch

Around the World in 80 Books by David Damrosch