Talking Location With Emma Stonex, author of The Lamplighters – CORNWALL

#TalkingLocationWith ... Emma Stonex, author of The Lamplighters set in CORNWALL

From the moment I decided to write a book about lighthouses, I knew I would set it in Cornwall. Home to the most magnificent tower lights – the Wolf Rock, the Bishop Rock, the Eddystone, the Longships – and steeped in sea mythology and rich folklore, Cornwall and her treacherous offshore reefs are as important characters in The Lamplighters as any of the keepers. I remember standing at Land’s End when the novel was just a flicker in my mind; I looked out at the distant lighthouse on the horizon, shimmering between the world we know and the shadow we don’t, where earth stops and sea begins, where sky meets water, and considered how sea towers exist in this in-between space. That awestruck feeling never left me, and eventually encouraged me to build my fictional Maiden Rock in these channels.

The mystery at the heart of The Lamplighters – the real-life disappearance of three lighthouse keepers from the Flannan Isles in 1900 – is a Scottish story. Of course, the Hebrides boast their own incredible atmosphere, but it isn’t one I’m as familiar with. Having holidayed as a child in Cornwall, soaking up the sights and smells of the Helford passage, splashing in pirate coves in Fowey, or dreaming of du Maurier as we passed Jamaica Inn on a windswept night, I felt confident in describing the region and the way it made me feel. Ultimately, that’s what we look for in location, and what readers look for, too: that its evocation in writing makes us feel something: a memory, a longing, a hope, some faint nostalgia for journeys gone by.

Places touch us and stay with us. They have enormous power to raise our spirits or disturb them, and what might be a site of comfort to one person – the Maiden Rock for Arthur, let’s say – can be a source of terror to another. The whole of the South West is special to me. While I was researching The Lamplighters, I travelled down to converted lighthouse keepers’ cottages in Devon, where I stayed alone as a way of immersing myself in that isolated way of life. All I could see from the windows was the vast, indifferent sea: it sounds freeing – and it was, at first – but after a while, it grew claustrophobic. Something in the lack of perspective, perhaps. As the lantern beam spilled across my bedsheets at night, that wild grey water seeped into my dreams. I imagined how it might have felt to be married into the lighthouse service and to live in such a remote, tight-knit community, with, as Helen puts it in the novel, ‘only the sea for company’. 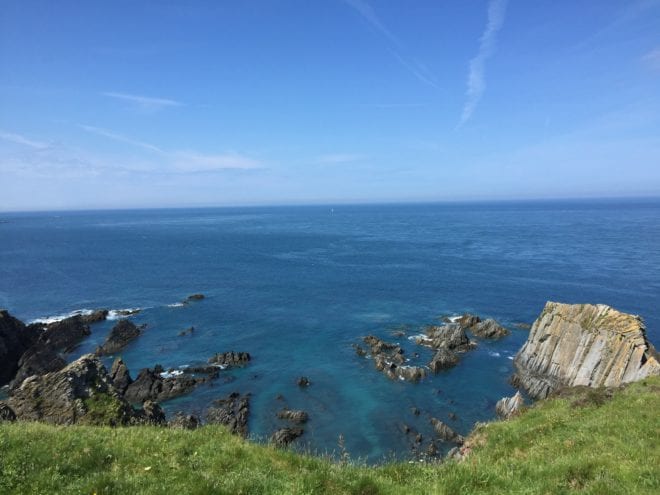 Over the years, I have visited land lights and rock lights, but never a sea tower. This location, I had to imagine. The towers are notoriously tricky to access and are reached these days by helicopter, rather than landing the traditional way with boat and harness (an extremely hairy and unpleasant experience, I should imagine). But it wasn’t difficult to picture myself there and bring my characters into those twelve-feet-wide circular rooms, stuffy with cigarette smoke and the fug of three men in close proximity, the windows shut against heavy weather, the interior damp and dark. I had read so much about the lives of lighthouse keepers, how they felt about the stations they were posted to (many dreaded the towers, particularly the remote and unfriendly Wolf Rock, miles off the Scilly Isles and the inspiration for my Maiden), that the interior layout and atmosphere was already embedded. I would emerge from my office at the end of a writing day, feeling as if I had stepped off a ship on rough seas, my legs turned to jelly, salt in my throat.

We’re all dreaming of a sun-kissed beach right now, but the British coastline will always hold a place in my heart. I hope to have captured some of its history and unique flavour in The Lamplighters, which, with its talk of HP Sauce and Radio 4, is very firmly located in the UK. But while these details might feel familiar to us, the lighthouses, perhaps, don’t. They remain in that mysterious middle place, monuments we see but cannot touch, a light shining just beyond reach.

The Night She Disappeared by Lisa Jewell, psychological thriller set in the Surrey Hills. Dark Place – a very...

Cabin Fever by Alex Dahl, psychological thriller set in Telemark and Oslo. Strangely, this is now the third novel...

Historical Fiction is one of the most popular searches on the TripFiction site. Here we list ten of our...