Where are the Neanderthals? The world their feet trod was vast, stretching thousands of kilometres and hundreds of thousands of years. Artefacts wrought by their hands are curated by the million, but visitors eyes often glaze over when walking past museum displays. The fleshless remains of Neanderthal bodies exert an eerie magnetism that stills the heart, yet truly feeling their presence can be elusive. 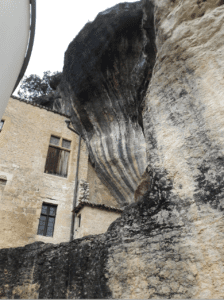 View of cliffs and museum in Les Eyzies 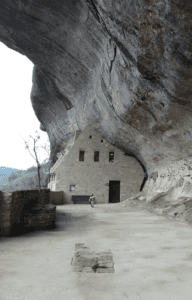 View under cliffs with old castle and museum

As an archaeologist, and while writing my book Kindred, there are some special places which have conjured up the Neanderthals. Ancient human lives captivated me since childhood, and family holidays on the Continent sparked a visceral connection to the deep past. In southern France history and time itself feels oddly congealed amongst cliffs and plateaux, snagged by myriad rockshelters and caves. In heady air perfumed by sun-distilled pine resin I tried to catch a glimpse of ancient shadows slipping through the gorges, overhung by limestone formations like forever-unbroken stone waves.

A memory from when I was 18 emerges. We’d visited the painted cave of Pech Merle, decorated by members of our own species Homo sapiens nearly 10,000 years after the Neanderthals disappeared. Back at the campsite, I sought out the lakeshore’s twilight calm. Swathed by cicada chorus and evening warmth so exactly at body temperature that you feel naked, I stepped into the water and looked up. A vertiginous feeling swept over me as I picked out the first evening stars. Their immense distance collided inside my mind with the unimaginable stretches of time revealed earlier that day in the blessedly cool cave. A sudden certainty blossomed, that this deep time – the world of the Ice Age – was what I wanted to study.

Fast-forward over a decade to my postdoctoral fellowship at a prestigious laboratory in Bordeaux. French living was wonderful, from early morning walks to the boulangerie for perfectly crisp fresh croissants, to exploring hidden corners of the 18th century city. Perhaps most wonderful was searching for the Neanderthals themselves. The unique environments they lived in may have vanished, but the land is still there: half of Eurasia is speckled with their caves. My fieldwork was in the less-visited though spectacular Massif Central, south-east France, but I visited excavations in the south-west, near the epicentre of French prehistory: Les Eyzies-de-Tayac.

view of Les Eyzies looking up towards the museum

This Périgord town contains nine of the fifteen sites for which the region was listed as a UNESCO World Heritage site. In January it’s quiet enough to hear peregrines cry over cliffs rearing above the rooftops, but summer sees narrow sun-baked pavements heaving with tourists. After sampling truffle omelettes at the Mairie café, they walk up to the National Museum of Prehistory, built round a ruined château under the limestone overhang. Only elaborate fireplaces hint at its long history, and they offer a strange echo of ashy prehistoric layers stacked metres deep beneath.

Les Eyzies sits at the centre of a sort of Palaeolithic wonderland. Its reputation began with the 1860s arrival of the railway, bringing scholars who made dramatic discoveries such as a tiny engraving showing humans had really lived alongside mammoths. Today a huge 1930s sculpture of a wistful-looking Neanderthal stands on the museum’s ramparts, and standing at its feet the vista before you reveals why this landscape has always offered prime real estate. Isolated for centuries, the medieval châteaux sprouting on the cliffs mark warring lords fighting for control of the confluence of the Beaune and Vézère rivers. Now softened by dry oak forest, many tens of millennia earlier this rugged topography also offered key routes for movement. During the Pleistocene Ice Ages the plateaux supported great herds, while the deep gorges were microclimates where trees clung on even as frigid blasts scoured the steppe-tundra above.

But the most precious treasures lay hidden until the early 20th century. Paddle a rented canoe from Les Eyzies up the Vézère and beyond the Tursac château (which faces the mammoth engraving site), you’ll see a limestone ridge like a ships prow jutting between two valleys. Here, by the hamlet of Le Moustier, is a rockshelter where the remains of two Neanderthals were found between 1907-1914. The first was a teenager who lived some time before 40,000 years ago, whose bones were first sold to a Berlin museum, then the skull taken to Russia as WWII booty (the skeleton left behind endured an incendiary Allied onslaught until both were reunited in the 1990s).

The second, more poignant, was a newborn Neanderthal baby whose skeleton miraculously survived a house being built on top of it, and which now rests in the Les Eyzies museum. Standing above it, the tiny size and delicacy – equivalent to the baby I’d had that very summer – brought home that the Neanderthals are all around us. Not just as the vanished walkers of the Eurasian tundra and dwellers of caves, but their DNA is still here, beating in billions of living hearts.

Kindred: Neanderthals Life, Love, Death and Art by Rebecca Wragg Sykes is published by Bloomsbury Sigma (2020). Available at Bloomsbury.com and at all good bookshops (and via the www.tripfiction.com website). 3 copies will be up for grabs in our regular Sunday evening Giveaway slot on 25th October, 2020.

A family’s testament of endurance in occupied Amsterdam

A family’s testament of endurance in occupied Amsterdam

War and Love by Melanie Martin – a family’s testament of endurance in occupied Amsterdam. “I read this book...

In Other Words by Jhumpa Lahiri, memoir and travelogue set across Italy (a love affair with the Italian language)....

Abandoned Churches – Unclaimed Places of Worship around EUROPE, by Francis Meslet and team. I have read Abandoned Spain...

We are delighted to offer 3 copies of Intruders by  E C Scullion. This is a thrilling and scary...

A brilliant UK and Ireland children and young adults’ booklist

A brilliant UK and Ireland children and young adults’ booklist

A brilliant UK and Ireland children and young adults’ booklist. In true staycation style this winter I’ve been busy...

The Island by C L Taylor, a YA thriller set in Thailand Six teenagers have been around each other...