The Town Hall in the Market Square

TripFiction recently spent three fascinating days in Wrocław (pronounced ‘rotslav’) in South West Poland. Wrocław is the fourth largest city in the country, and has seen many violent changes in rule over the centuries. In the 10th and 11th centuries it changed rulers from Bohemia, to the Kingdom of Poland, to the Duchy of Silesia, and back to the by then divided Kingdom of Poland.  And then, in the 13th century, it was sacked and burnt by the Mongol invasion of Poland. It was rebuilt by German settlers, who – over the years – became the major ethnic group in the city. During the centuries that followed it was controlled by the Kingdom of Bohemia, the Hanseatic League, the Habsburg Monarchy, the Kingdom of Hungary, the Kingdom of Prussia, the German Empire, the Weimar Republic, and Nazi Germany! Quite a history… oh, and during its time under German rule it was known as Breslau rather than Wrocław… After WW2, it was returned to Poland (under communist rule), the German residents were expelled and replaced by ethnic Poles. In 1989 the current phase of its existence started when the Soviet Union collapsed and Poland became a democracy (and later a member of the European Union). In 2016 Wrocław was voted the European City of Culture – a very apt honour… it is hard to think of a more European city with a more turbulent and culturally mixed past.

The beautiful Aula Leopoldina in the University 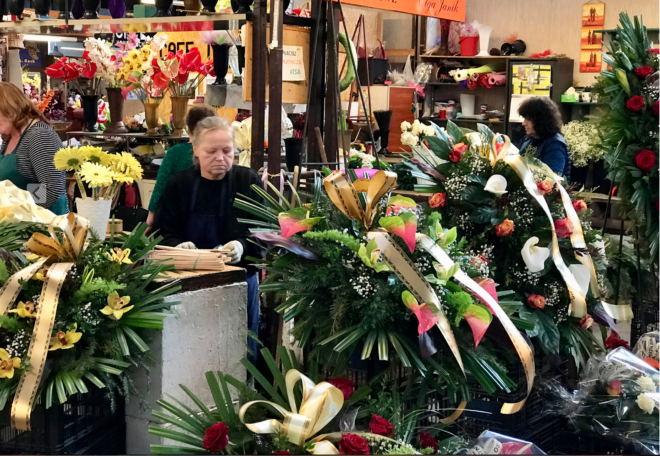 The covered market – funeral flowers and a face to match 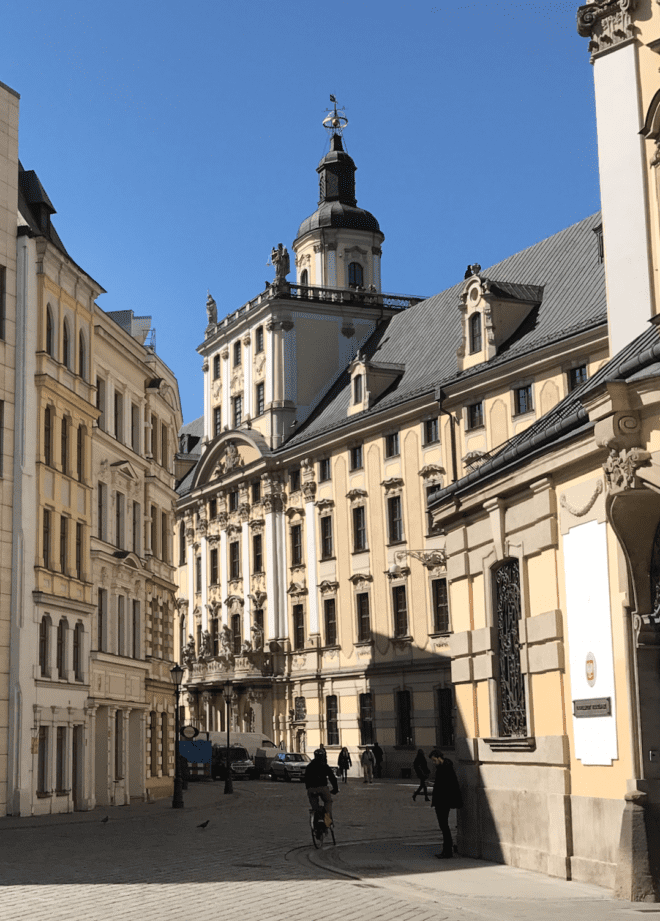 The Mathematical Tower at the University

The fountain in the main square

A great place to spend three days. The city is not large and we walked everywhere… first stop was the large central square with its splendid Town Hall. Thronged with people enjoying the sunshine, the square is surrounded by inexpensive restaurants and bars. A great place to have a beer and watch the world go by. And to begin spotting the ‘Dwarves of Rocław’ a series of no less than three hundred and fifty 20cm high statues featuring the former inhabitants of Rocław about their everyday tasks. Then onto the University area – quite possibly the cultural highlight of any trip to Wrocław. A sensationally beautiful building (particularly the interior) splendidly restored after the damage it received as the Russians advanced at the end of WW2. The Aula Leopoldina is a hall full of absolute splendour, and the Mathematical Tower sits atop the building commanding views right across the city (the walk up is worth it!).

Next was a visit to the imposing indoor market – where you can buy almost anything. Then an hour’s wall along the River Oder. Not quite as easy as we had imagined it might be – the path doesn’t exist all the way – to a very peaceful Japanese Garden. A bit of a haven away from the busy city centre.

And finally an excursion (again on foot) to Cathedral Island (the clue is in the name…) to see the Gothic Cathedral of John the Baptist and the imposing outside of the Church of the Holy Cross (no entering, please). Also on the Island is the extensive and extremely well manicured Botanic Gardens. We were a little early in the year for the outdoor part (Spring was just starting in Wrocław), but there was a series of impressive glass houses hosting an enormous variety of plants from right across the world. It must be an absolutely splendid place to visit from May through to October.

The Botanical Gardens: come back later in the year to see the chrysanthemums!

The rooftop view from the Mathematical Tower of the university

So, our lasting impression of Wrocław was of a delightful non tourist-over-run city with a friendly population and some great things to see. Manageable in size and ideal for a three day break. A great place to relax and reflect.