Home Latest Thriller set in Stockholm and on Everest

Thriller set in Stockholm and on Everest

The Girl Who Lived Twice by David Lagercrantz, thriller set in Stockholm and on Everest. Translated (from the Swedish) by George Goulding. 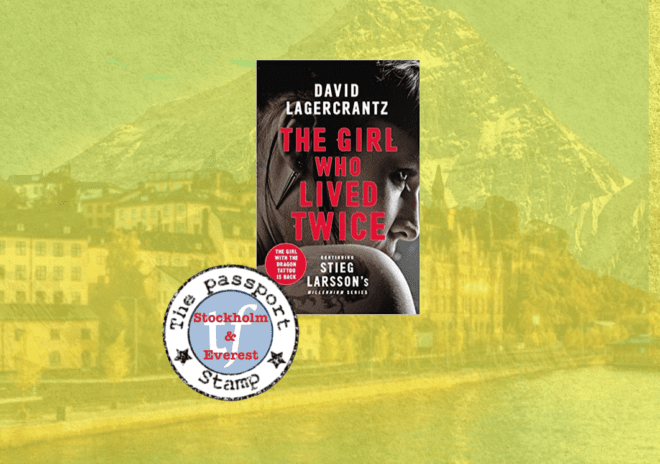 The Girl Who Lived Twice is the sixth book in the acclaimed Millennium thriller series featuring Lisbeth Salander, ‘the girl with the dragon tattoo’. It is the third written by David Lagercrantz following the untimely death of the original author, Stieg Larsson. David’s style is very similar to Stieg’s (perhaps the stories are a little tighter…) – I doubt if many will have noticed the switch.

The book is set in present day Stockholm and on the slopes of Everest a few years in the past. There is also a side diversion to Moscow. The Everest expedition feeds into the present day story. The expedition was largely a vanity affair – with the participants paying many thousands of dollars for the privilege. There were emnities and jealousy in the group – some would have done nothing to save the lives of others caught in a freak storm on the mountain. Others would have actively striven to make sure there were deaths that would never be investigated properly.

Switch to two stories in the present day. Lisbeth Salander is determined to rid the world of her sister, Camilla – now known as Kira. She is Lisbeth’s deadly enemy – stretching back to childhood. She is heavily connected with some pretty unsavoury people in Moscow – both the Russian mafia and the state security services. In the second story, journalist Mikael Blomkvist (Lisbeth’s investigative partner in the other Millennium books) is looking into the murder of a down and out on the streets of Stockholm. His investigations lead him back to events on Everest…

The stories inevitably become intertwined, and Lisbeth and Mikael are placed in grave danger as Camilla and the Russian mafia head for Sweden. The finale is fast, furious, and bloody. They both survive – just.

The Girl Who Lived Twice is a welcome and deserving addition to the world of #scandinoir.

Psychological thriller set around the MEDITERRANEAN

Psychological thriller set around the MEDITERRANEAN

Daughters by Lucy Fricke, translated by Sinéad Crowe, a road trip novel set across Europe. This is one of...

Introducing V&Q Books: “Remarkable Writing from Germany” Imagine you had a treasure chest of books no one else could...

A novel of Jackie Kennedy and Maria Callas

A novel of Jackie Kennedy and Maria Callas

The Second Marriage by Gill Paul, a novel of Jackie Kennedy and Maria Callas, set in the USA and...

Plague by Julie Anderson, political murder thriller set in LONDON. The Palace of Westminster (otherwise known as the Houses...