Whilst attending the 22nd Literary Festival in Leukerbad in Switzerland I was delighted to have the opportunity to meet up with author Tim Parks, an Englishman now living in Northern Italy. It was a particular pleasure because in the early days of TripFiction, his books set in Italy were the first to appear on the website. That now takes us back 5 years and counting! 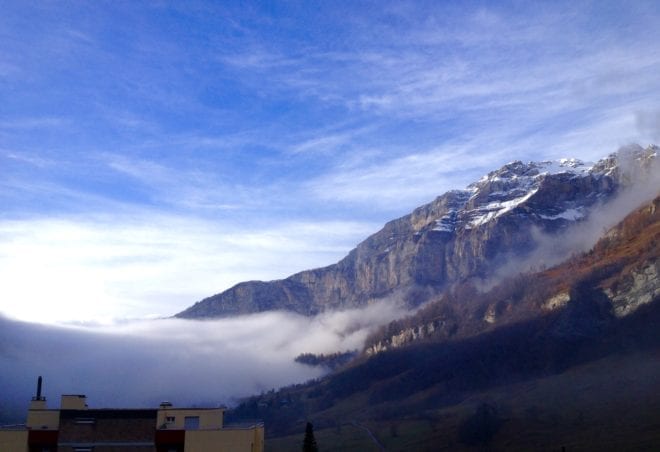 The setting for our meeting was the wonderful little resort of Leukerbad, nestled in the Valais, at 1400M, vistas down to the Rhone Valley, thunderous peaks like a chain of guardians around the village, each sprinkled with snow on their tops. It was off to the foyer of the Hotel Les Sources Des Alpes (part of the Relais and Châteaux group).

I had already attended his reading the evening before at the Walliser Alpentherme, which had morphed from a relaxing thermal swimming pool into a venue with tables and candles. He read from his novel Thomas and Mary: A Love Story and it was clear what a great observer of human character and foibles he is.

Tim Parks at the Walliser Alpentherme

Talking to him about his books with an Italian setting, he said that in Italian Neighbours and An Italian Education he explored what he saw around him in the Veneto, familial relationships being the essence and fabric of Italian society. He saw himself as “a privileged observer“, an outsider looking in on a different European culture.

He was asked to write a book about living in Italy following the success of Peter Mayle’s Provence series, a collection of memoirs that were so incredibly popular in the later 1980s. But his initial offerings were rejected (and he has kept his rejection letter for future generations to pore over and perhaps gain solace that even top writers get rejection letters!). He then went on to write a memoir about football (but it wasn’t really about the game) following Verona as they zigzagged to their matches across the country – A Season with Verona. Not so much football, but more about how the North and the South of the country interact, and an examination of the part football plays in the national psyche – a highly personal account of one man’s relationship with a country, its people and its national sport.

It actually took him a “long time to how to use Italy in fiction“.

And then we went on to talk about his work in translation as a University lecturer. Even there he observes dynamics, that 90% of his students are female. He ponders what the sociological, societal and perhaps unconscious forces might be, that appear to attract so many more women to this profession. His next book will be set in this environment.

My introduction to his work was through the memoirs and travelogues set in Italy, but I have come to appreciate the breadth of his capabilities as a writer and observer of the human condition in several of his other books.

Finally, I wanted to know more about how he feels as a British person living full time in Italy. The country, he feels, is not in a happy place at the moment – there is 40% youth unemployment compared to 6% in Germany and 10% in the UK. Yet he has made his home in Northern Italy, which has so many aspects to recommend it. His roots are in England, of course, and he says he misses the British landscape, London and the easiness of speaking English.

With many thanks to Tim for taking the time to chat to me!

All Men Love Leah by Ksenija Nicolova, novel set in Pisa. This is a fairly short and densely told...

A Single Rose by Muriel Barbery, novella set in Kyōto. Many readers, I imagine, will be familiar with The...

Hell and High Water by Christian Unge, a dark Swedish thriller set in Stockholm. Translated by George Goulding and...

#TalkingLocationWith …  Fiona Valpy, author of The Storyteller of Casablanca – Casablanca. The email arrived out of the blue....

The Unheard by Nicci French, tense mystery set in London. In case you are unaware, Nicci French is the...

Giveaway – it’s all about VENICE, 3 beautiful titles to transport you. Will you be taking a trip to...