A history lesson and travelogue through Italy – past and present

The Appian Way by David Hewson – a history lesson and travelogue through Italy – past and present. 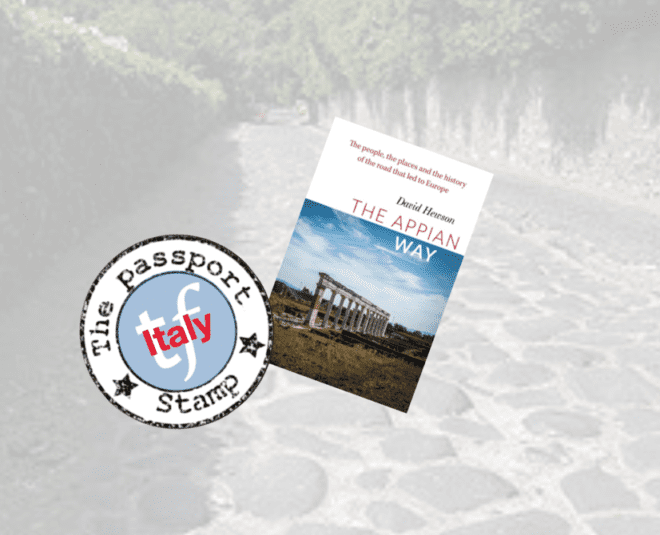 The Appian Way is a really interesting book – erudite and informative, but not in a way that would put anyone off reading it. The Appian Way of the title is a road that runs from Rome down to Naples and across to Brindisi in the heel of Italy. It was the first road (of many, many) built by the Romans for the fast transportation of military might and supplies. Brindisi was – and is – the major port for travel from Italy to Greece and North Africa. It was a key to the building of the Roman Empire. [I diverge for a second. In my youth I was on a Greek ship leaving Brindisi harbour one July evening for the trip to Piraeus. We were racing for the harbour exit with an Italian ferry. The two ships collided with a frightening crunch and splintering of the hulls…. Now back to The Appian Way].

David, the best selling British author of thrillers set in Europe – and primarily Italy – uses The Appian Way as device on which to hang the story of the Roman Empire from the days of the republic and consuls through the reign of numerous emperors – many of whom were larger than life figures that ruled for years, many of whom were lesser mortals who reigned for only a matter of months before being ‘disposed of’,  right through to the splitting of the Empire into East (based in Constantinople / Istanbul) and West (based in Rome). It is a fascinating (and well written, as you would expect) story of great material achievement matched by at least as great a display of debauchery and callous violence.

As well as a well constructed history lesson, The Appian Way is also an up-to-date travelogue. David hired a small car and set off from Rome along the old route. The Appian Way is sometimes paved over as a new highway, and it sometimes just disappears. It is a major detective undertaking to try and trace it – but David gives future fellow travellers many clues as to where to look. Towns which were really important in Roman times are now but shadows of their former selves. Life has passed them by over the intervening centuries. The world has moved on.

I am by no means a Roman historian. But I really enjoyed the book.

Around the World in 80 Children’s Books: A Global Booklist for Kids

Around the World in 80 Children’s Books: A Global Booklist for Kids

Around the World in 80 Children’s Books: A Global Booklist for Kids September marks #WorldKidLitMonth, a month to celebrate...

The Hit List by Holly Seddon, a solid thriller set in London and Surrey. This was my first novel...

A look back at ROME’s architecture

A look back at ROME’s architecture

Rome Was! by Randolph Langenbach, a look back at Rome’s architecture. Rome as it is today is a tourist...

Venice is one of the most searched locations on the TripFiction site. It is also a city in peril....

#TalkingLocationWith… Olja Knežević, author of Catherine The Great and The Small, set in MONTENEGRO. My home-country, Montenegro, has been...

All My Lies Are True by Dorothy Koomson, suspense novel set mainly in Brighton/Hove. Have you read any novels...