A novel of lyrical waxing, set in Revolutionary PARIS

Little by Edward Carey, a novel of lyrical waxing, set in Revolutionary Paris.

Little: ‘The wry, macabre, unforgettable tale of an ambitious orphan in Revolutionary Paris, befriended by royals and radicals alike, who transforms herself into the legendary Madame Tussaud.’

Welcome to the wonderful imagination of Edward Carey, who has created a story and cast of characters as quirky and engaging as any I have read for many a year.

‘My mother had a large nose, in the Roman style. My father, so I would come to believe, had a strong chin that pointed a little upward. That chin and that nose, it seems, fitted together. After a little while, however, Father’s furlough was over, and he returned to war. Mother’s nose and Father’s chin had known each other for three weeks.

Marie Grosholtz enters the world in 1761, in a village in Alsace. A tiny, strange looking creature, she becomes orphaned before being apprenticed to an eccentric wax sculptor, Doctor Curtius.

Together, they decamp to the altogether more exciting environment of Paris, living in an old Monkey House on a grand boulevard, where they start to exhibit wax heads of the rich and famous of this great city. They are joined in their enterprise by sour, greedy, bullying Widow Picot and her pale, withdrawn son Edmond.

This unlikely foursome create a sensation, and Parisians flock to the Monkey House. Marie – ‘Little‘ – moves to the Palace of Versailles, living in a cupboard as a servant of King Louis XVI’s sister Élisabeth. But this is a time of Revolution and great change is afoot.

Marie’s survival through the Revolution and the subsequent Reign of Terror, and transformation into Madame Tussaud in London, is told with great affection, whimsy and imagination by the author, who himself worked at the waxworks in his 20s.

‘Little‘ is a novel, historical fiction rooted in fact but portrayed as a fantasy. Accompanied by brilliant pencil etchings, as quirky as the story and its characters, this book is as hard to classify as it is to forget. 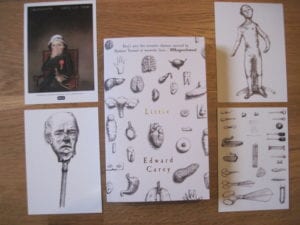 For TripFiction lovers, you will be immersed in the sights and smells of Revolutionary Paris, both its abject poverty and its obscene opulence. The depth and vibrancy of author Edward carey’s imagination make this novel a rare treat for those looking to travel with a book, through both time and place.

Literary Places and Classic Titles – travel the world from your armchair

Literary Places and Classic Titles – travel the world from your armchair

GIVEAWAY! 3 copies of ‘Into the Tangled Bank’ by Lev Parikian (The British in Nature)

GIVEAWAY! 3 copies of ‘Into the Tangled Bank’ by Lev Parikian (The British in Nature)

Giveaway! 3 copies of Into the Tangled Bank by Lev Parikian. We are delighted to once again be working...

#TalkingLocationWith… Julie Anderson, author of Plague, set in LONDON When life and fiction collide…. In 2018 I began the...

Summertime at the Cornish Confetti Agency by Daisy James, romcom set near fictional Pengarth, Cornwall. I was delighted to...

Join TripFiction or sign in if already a member, add a book to the site, and be in with a chance to win a book of your choice to the value of £15 / $18 in our July draw!

Then it's really simple to add a new book