Dark and mysterious short stories set around the world

Jerusalem Ablaze: Stories of Love and Other Obsessions by Orlando Ortega-Medina, dark and mysterious short stories set around the world.

13 stories – of varying length, addressing love and obsession – set around the world, transporting the reader from Los Angeles, Quebec and Tokyo to Israel… 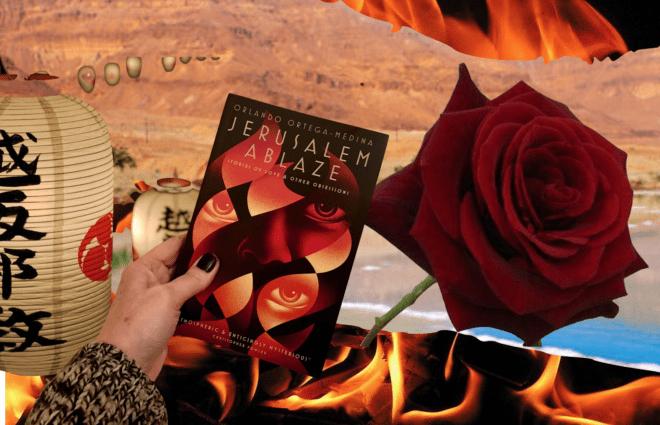 A collection of stories about relationships, passion, lust and the darker side of human nature. They will certainly not be for everyone, that is for sure, but there is a quality of writing that goes above and beyond some of the darker interactions that kept me reading.

The first story titled “Torture of Roses” is exactly that. A reviled aesthete who revels in skewering his skin, feels it is time to choose a young man to be his heir – and servant. Theirs is a convoluted relationship and his heir, once the end is nigh, has little pity left…

In general the author tantalisingly plays with the fused neural pathways in the brains of his characters, where there is often a sharp link between sex and death; or a link between sex and voracious eating; or sex and religion. The author is clearly fascinated with exploring the skewed relationships that people can be drawn to. Oh, guilt and beguilement are only half the story. Control and cupidity (for both possessions and people) infuse the stories – consider, for example, the stealing of shoes from a hakujin beggar on the Ginza (Tokyo) by a young person. Or the wife of a lighthouse keeper who attaches herself to a body that has washed up on the seashore. She certainly doesn’t want to surrender the body as she discovers a strong need to care for it.

Then on to the story of the haridan wife who likes to intimidate her husband into clearing snow for new neighbours. Or the man who attempts to have sex down a back alley and gorges himself on his conquest as though she is something to be internalised and consumed.

I felt the author really got into his stride in the last two stories set in Israel, indeed one of the stories provides the title for the collection. But such is the nature of the short story, the reader is left wanting more. These stories will find their ideal readership amongst the lovers of European Noir.

The author clearly know his chosen settings and they certainly make a colourful backdrop to the stories.