Do we judge a book by its cover? The answer is Yes! 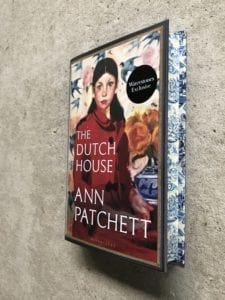 Do we judge a book by its cover?

I recently reviewed Ann Patchett’s “The Dutch House” and my copy was a Waterstones special edition, beautifully executed and with Delft Blue sprayed edges and a Delft inspired design. You can read my review here.

At the end of this particular edition, the author writes a short piece about the importance of a book cover. She is the co-owner of Parnassus Books in Nashville, Tennessee and she has no doubt that covers are precisely how a book is judged. It is often an intangible combination of the arrangements of the words, the size and shape of the font and the graphics – these should all work together to draw the eye. Or not! Book covers are the call to readers, like a rose to a bee.

She has a lot of experience, both as a writer and as a book store owner.and cites her early intervention in trying to control the cover designs of her novels –  not overly successful – in the early years of her writing career. By the time she had written Bel Canto, she had gained invaluable experience within the publishing industry and had more authority to determine the kind of book jacket she desired.

Run, her fifth novel, had everyone vexed. One trial cover had a photograph of snowy Central Park (but the book is set in Boston); it also erroneously had a rubbish bin central to the image. Eventually a cover was agreed. But the whole team had jumped through hoops to find the ‘right’ jacket. With State of Wonder she sent the record cover of An Historic Return: Horowitz at Carnegie Hall over to the design team. That had the feel of what she visualised on the cover of her novel and hoped it would inspire the design of her book jacket.

Working at the bookstore, she says she unpacks a lot of other people’s books and she is clear about which kind of books will crinkle at the edges, which colours will scuff more easily, which typefaces shout at the reader and she now can spot the jackets that will work for an author.

When she had finished The Dutch House, she was clear that she neither wanted a picture of a house on the cover, nor any part of a house. She had thought to call the novel Maeve, which would have made her intentions clear. She craved a portrait of Maeve how she herself saw her but none of the stock photos were quite right. She turned to a local artist, Noah Saterstrom, and asked him to paint Maeve’s portrait à la 1950s, a portrait that exists in the story. If it didn’t work out, she would be the owner of a painting. As it was, his vision captured the character and now appears on the cover of this book.

Isn’t that just such a lovely story with a wonderful ending? You can find out more about his work on this link.

Do you judge your books by their cover?

We are delighted to be able to offer each of 3 winners a copy of The Order of Time by...

Bolivia is the latest place for us to visit in our ‘Great books set in…’ series. Five great books...

Random musings on recent book cover designs. Every now and then I like to muse on the book jackets...

American Dirt by Jeanine Cummins, novel set mainly in Mexico. The book is causing rather a to-do in the publishing...

#TFBookClubMarch/April 2020 For those TripFiction fans who don’t already know, we have a TripFiction Book Club that we kicked off back...