Giveaway! 3 copies of Fire and Vengeance set in Hawai’i…

We are delighted to be able to transport you to Hawai’i! 3 copies of Fire and Vengeance by Robert McCaw are up for grabs! Click here to find out more about his research of setting. 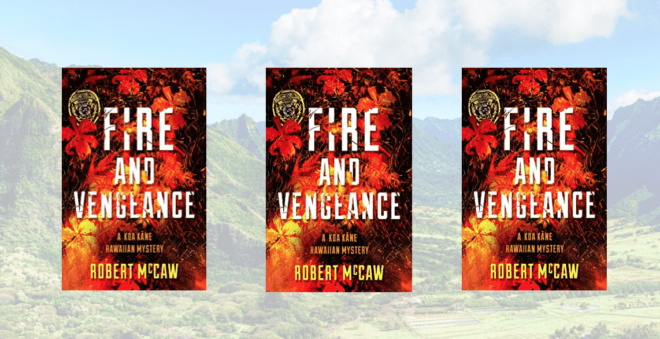 Fire and Vengeance by Robert McCaw

Having killed his father’s nemesis and gotten away with it, Hilo, Hawaii Chief Detective Koa Kane, is not your ordinary cop. Estranged from his younger brother, who has been convicted of multiple crimes, he is not from a typical law enforcement family. Yet, Koa’s secret demons fuel his unwavering drive to pursue justice. Never has Koa’s motivation been greater than when he learns that an elementary school was placed atop a volcanic vent, which has now exploded. The subsequent murders of the school’s contractor and architect only add urgency to his search for the truth. As Koa’s investigation heats up, his brother collapses in jail from a previously undiagnosed brain tumor. Using his connections, Koa devises a risky plan to win his brother’s freedom. As Koa gradually unravels the obscure connections between multiple suspects, he uncovers a 40 year-old conspiracy. When he is about to apprehend the perpetrators, his investigation suddenly becomes entwined with his brother’s future, forcing Koa to choose between justice for the victims and his brother’s freedom.

HOW TO ENTER (this is a USA only giveaway!)

To be eligible to enter you need to be a member of TripFiction. Go to www.tripfiction.com, scroll down until your find the JOIN NOW tab, and, well, join up. It’s super easy.

Then. Tell us below what you would like to see and do in Hawai’i! Maybe you have some top tips to share if you have already been!

Do this by midnight, Saturday 1st August and the first three names out of the hat will be sent a copy each by the publisher. Good Luck!