Literary Tourism: Travelling on the Outback Australian train The Ghan to Darwin by Hazel Edwards

‘The Ghan’ is a train with mystique. It’s on the ‘must do’ list for many travellers. Rail enthusiasts ‘collect’ the journey in memories, stories and photos. Reasons vary. Partly the long distance. Partly the historic setting. Others are keen to see wildlife. But for me the passengers were equally intriguing. 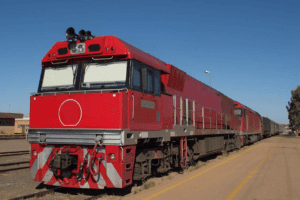 Passengers all joke about The Ghan experience being similar in circumstances to Agatha Christie’s Murder on the Orient Express. Themed travel is common on cruises.  Bridge-playing. Family History. WW2 Military history. The real Ghan train journey of three days doesn’t offer role-playing Agatha Christie-themed tourist travel YET, but fiction always asks ‘What if?’ And what if a fictional fake Christie plot, turns into a factual murder in a fictional mystery?

Travelling on ‘The Ghan’ from Adelaide to Darwin for family ‘grandma’ visits was ‘research’.

I knew I was going to use the setting in my next story, but how? Such a colourful, red-sand setting but also a rich history from the original Afghan cameleers who traded in the Australian outback and after whom the train is named.

Many international travellers, especially Scandinavians, regard ‘The Ghan’ as one of the ‘must do’ LONG journeys: long for distance and the number of carriages on the kilometre train.

Participant-observation is my writerly excuse for eavesdropping, clue-seeking and doing interesting things, so the settings in my subsequent books will be realistic. And I have the fun of living more intensively using all senses, which enhances travel.

But deciding to use ‘The Ghan’ as the setting for a mystery sequel was a considered decision.

Strategically, a long distance train is a confined and remote space with strangers. And Adelaide to Darwin takes two nights and three days.  Same for the reverse journey although many fly one way. A mystery could be contained to those suspects who were passengers or crew. What might link them?

I had already created a versatile celebrant sleuth in ex-actor Quinn. Celebrants, as they are known in Australia, conduct weddings and funerals and special occasions like naming ceremonies.

After writing Celebrant Sleuth I Do or Die, set in a regional country town, where each chapter used a different wedding or funeral scenario, I wanted a stand- alone story which was shorter than conventional novel length but where I could use a setting of interest to international readers too. E books make variable lengths possible. So does audio.

And the Australian Outback offers challenges in terms of distance, wildlife, weather fluctuations and eccentrics, as well as backpackers, Grey Nomads (elderly couples who travel in campervans etc) and resourceful locals. But the actual Ghan is a luxury train.

What have I learnt?

More than a decade earlier I’d written a children’s mystery series ‘The Frequent Flyer Twins ‘and ‘The Fantastic Ghantastic’ story included the Alice Springs Beanie Festival when the children visited on The Ghan. So I was aware of the symbolic indigenous art designs. And I re-read for the atmosphere.

Outlines often change. This was my original, some of which was later used in the blurb.

Most travellers on The Ghan, jokingly mention ‘Murder on the Orient Express’, because ‘long distance, overnight train travel across the desert’ has a mystique.

So the Scandinavian Book Club’s priority is ‘to see kangaroos’ on their Australian visit but they are also booked as secret guests on the hypothetical undercover, Agatha Christie- themed role-play murder on The Ghan ‘Wed then Dead’.

Each is allocated a role.

One carriage of the kilometer long train is full of Agatha Christie fans, all sworn to secrecy. The rest are ordinary tourists.

Celebrant sleuth Quinn and partner Art are onboard too. But Quinn’s job is to celebrate a wedding at the sunrise breakfast stop out in the desert at Marla. Then there is supposed to be a wedding breakfast for the couple.

Why take the real train journey?

A big difference between just ‘being’ somewhere and actively collecting story ideas. A bonus is that as a writer-researcher using real settings, you live more intensively, using all your senses, especially your imagination muscle.

The bookcover was a challenge because so many have travelled on the train, or intend doing so.  Graphic designers Joh Fitzpatrick & Kim Edwards captured the essence of ‘The Ghan’ and linked to the earlier Celebrant Sleuth: I Do or Die.

Writing and reading about a real setting, intensifies your travel experiences.

Thank you so much to Hazel for sharing her research experience on this wonderful train! She is best known for her children’s classic picture book series‘There’s a Hippopotamus on our Roof Eating Cake (PenguinRandomHouse) which turns 40 soon. Recently she has turned to adult mystery and crime. Celebrant Sleuth:I Do or Die (BookPOD). The popularity of her celebrant Quinn, who solves problems, even murder, at weddings, funerals and other ceremonies, has led to the publication of Wed, Then Dead on The Ghan (BookPOD) An earlier collection of suburban noir Almost a Crime brief stories is available on Kindle. More details via her website. And of course catch her on Twitter!

Talking Location with Nick Kelly… author of  The House of Fortune set in QATAR. Fate is a funny thing....

10 Historical YA Novels Set Around the World: A Booklist by Kat Dunn

10 Historical YA Novels Set Around the World: A Booklist by Kat Dunn

10 Historical YA Novels Set Around the World: A Booklist by Kat Dunn Bone Talk by Candy Gourlay –...

A Day In The Life Of… Alice Spencer, a “Barefoot Bookseller”

A Day In The Life Of… Alice Spencer, a “Barefoot Bookseller”

We are delighted to introduce to our new feature #ADayInTheLife … and it’s off to meet Alice Spencer, a...

Novel set across ASIA from RISHIKESH to HONG KONG and more

Novel set across ASIA from RISHIKESH to HONG KONG and more

The Backpacking Bride by Janice Horton, novel set across ASIA from Rishikesh to Hong Kong and more. In these...

AUC Press talks to author Nektaria Anastasiadou about her debut novel A Recipe For Daphne, set in Istanbul. AUC...