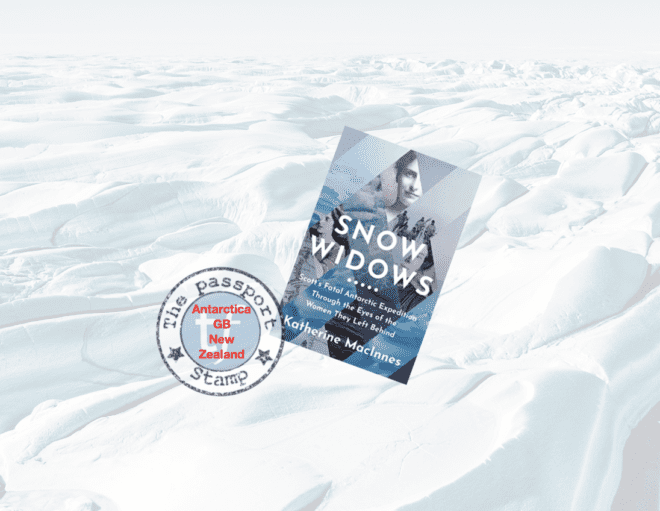 Snow Widows is an account of the Antarctic expedition to reach the South Pole, that was undertaken in the early 20th century by Robert Falcon Scott and his team. It aims to describe the expedition as experienced by the women they left behind. The book is the result of the author’s ten years of research into Scott’s voyage, told through the correspondence, journals and images that survive. The focus of the retelling is on the women – the wives and mothers of the explorers – and the personal journeys that each of them undertook while their menfolk were away. The result is an accurate and moving account of life in a time when long-distance travel and communication were much slower and more difficult than they are today.

As friends of TripFiction, we often choose books to match where we’re going on our next holiday. We might want to learn more about the destination before we go or perhaps to immerse ourselves in a story with the characters inhabiting the same places as we’re visiting. In the case of Snow Widows, much of the action takes place in the Antarctic, which even today is an unlikely spot for tourism. In addition to the polar landscape, the author writes a social history of life in Edwardian England in the years leading to the world wars.

Most of us will have at least some idea of the story of Scott and the men who went with him to the South Pole. Yet few will have heard of their wives and mothers, even though they were remarkable and many of them achieved great things in their own right. The account begins with the women waving goodbye to the ship, the Terra Nova, as she sailed away from Cardiff for the southern hemisphere, knowing that it would be a year, two years, or more, before they know whether the mission had succeeded. It explains the limitations of communication at the time – telegrams and cable messages were new and hadn’t reached many parts of the world, let alone the polar regions. What a contrast for us! We can follow planes on radar to “check’ that they land as expected, even text in mid-air, and we expect to be in touch with family and friends almost constantly.

Snow Widows is written using the values of the day, mostly the years between 1910-20s, so we see the experiences of the women through this lens. Much was made of appearances, so we see the women making choices based on what is expected of them. Equally, the men – and particularly Scott himself – are driven to achieve what they believe will make their women proud of them, creating an almost inevitable mixture of “heroism and disaster.” The book describes the different backgrounds of the families; from Lois Evans trying to make ends meet as the wife of a sailor living in rural Wales, to the grand manor house and estate of benefactor Caroline Oates.

Snow Widows describes the women’s attitudes to the expedition, their place in society, their views on the suffragette movement and much more. It links to other great moments in history, such as the sinking of the Titanic, and scientific and artistic developments. Through the eyes of the women, we experience the agony of distance – we realise that it could take a year to receive news from the expedition; that the expedition is “a world of dangers that [they] cannot share.”

Naturally, the Norwegian Amundsen’s voyage is part of the narrative and there’s an interesting debate to be had about whether the twin journeys were a race, a competition, or simply two ways to address the same challenge.

Descriptions of the Antarctic journeys are mainly from the documentation that survives: diaries detailing the extreme cold and the challenges of crevasses and mountain slopes. By contrast, we see some of the women travelling to New Zealand, where they experience comparative luxury and civilisation, as well as contrasting landscapes. In addition, the author describes cold, stormy winters in Scotland, warm visits to Italy and day-to-day life in various parts of England and South Wales.

Although as readers we already know the outcome of the expedition, the author describes the way that the news reached the families of the men and creates great tension. Similarly in recounting the challenges that the women face, both in keeping themselves out of abject poverty, in some cases, and in their attitudes to trying to find out what went wrong. This is not a dry history book – it would be hard not to feel great compassion for each of the women, due to the separation, anxiety and grief they experience. There’s humour too: when Kathleen Scott is effectively hiding from society in New York she bumps into American explorer Robert Peary and learns that Amundsen is giving a lecture in the same building. Exasperated, she asks, “Is the whole building booby trapped with polar explorers?”

Snow Widows is written as a chronological account – with a few exceptions – and will appeal most to readers who enjoy social history and hearing the voices of women. It can be a little difficult to work out which women belong to which men at first, and a diagram of Scott’s journey would have been helpful, but these are small things in a book that is a serious achievement and a thoroughly engaging read.

Sue for the TripFiction Team