Novel set in DORSET and PARIS

The Whalebone Theatre by Joanna Quinn, novel set in Dorset and Paris. 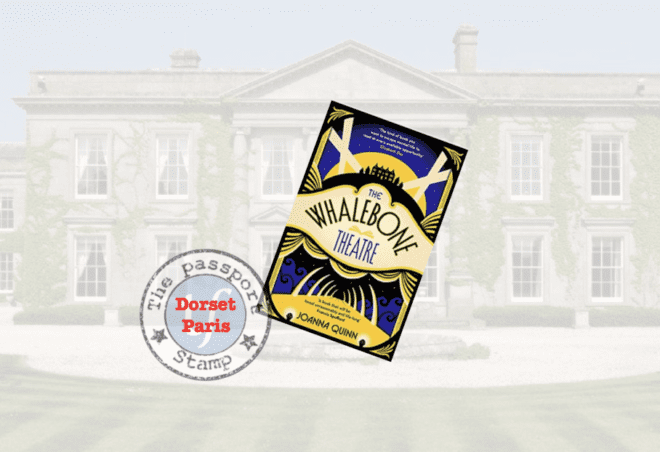 The Whalebone Theatre by Joanna Quinn is an enigma: a glorious book within a book. Initially it is a slightly meandering tale, a country house novel, set in the claustrophobic confines of the fictional Chilcombe estate in the Dorset countryside. About half-way through the book turns a sharp corner and suddenly the reader is plunged into a full-on spy thriller, featuring the same Seagrave family. For me, this was the most exciting and fulfilling part of the book.

The book follows the fortunes of the Seagrave family – the slightly louche, laissez faire, upper class adults and their free-range children, who survive a regime of benign neglect. Balance is provided by the servants who know their places and play the traditional roles of the lower classes. The book begins pre-World War I and gently rambles forth, covering the changes brought about in the early part of the 20th century and setting the scene as far as the characters and their relationships are concerned.

The Whalebone Theatre of the title is the creation of young Christabel Seagrave, who discovers the carcass of a whale on the beach and claims it by planting a flag on the top, only to discover that it belongs to the king. In scenes reminiscent of Swallows and Amazons or even Lord of the Flies, the children of the household enact plays and construct a seaside theatre using the enormous, arching whalebones as part of the stage. For Christabel, her role as stage manager is the only way she can control any aspect of her life. She sees herself as “not really a person at all, certainly not a person with a story”, but all that will eventually change. The book introduces us to a wealth of eccentric characters, including an American poet, a Russian artist and his many completely feral children, the adventurous Uncle Willoughby Seagrave with his new-fangled cars and aeroplane, and army officer Perry. Then there’s the maid, Maudie, who is barely literate but keeps diaries that are quite philosophical and far funnier than she intends. At this point, The Whalebone Theatre follows each of the characters in turn, rather than focussing on one, and a few of them are summarily despatched along the way.

All the characters share a love of the theatre and, even when they aren’t dragooned into one of Christabel’s productions, they never stop acting. For mother Rosalind, for example, everything is about appearances, dressing up to entertain and impress potential suitors, even though she is married. The theatre provides a connection between the adult and children’s worlds, though often it’s the adults who provide the melodrama while the children act more sensibly and rationally. The children’s knowledge of the outside world is gleaned almost exclusively from books, because they don’t leave the estate – the girls don’t even go to school. Luckily they have a French governess, and her instruction proves key to Christabel’s future.

By the time the second world war is looming, Christabel senses an opportunity and seizes the freedom to do things that have previously been denied her. With the help of Perry, she joins up and soon finds herself a member of the Special Operations Executive, supporting the resistance in France. The change in the book is marked: whereas she had previously written letters to her precious brother Digby and sister Flossie recording her life, now that she has been “stopped in telling the story of herself, she is whoever she is when she wakes up”. She notes the levelling effect that war has brought about: “It no longer matters who they are and where they came from”. Christa’s motivation for her courageous mission is at least partly to discover the fate of her precious brother, Digby, “the boy who prefers sonnets to rugby”, who is also deployed in France, and who exclaims, “My new uniform is quite the best costume I’ve ever worn”, also telling Christa, “You were born for adventure”. Christa’s feminism – “a woman in a man’s world” – is however brought to a crashing halt, as she discovers that no matter how successful her missions, eventually the male hierarchy controls her future: “Either they notice I’m a woman, and they don’t want me because of that, or I have to hope they somehow don’t notice, which leaves me rather eradicated either way.”

The language of the book is exquisite and there’s a gently mocking humour, which I loved. Describing love scenes in the Whalebone Theatre, for example, the poet Myrtle remarks, “nothing says romance like a dead whale”. There are long, poetic descriptions, which are beautiful. I recommend taking the time to enjoy them rather than being determined to dash through the book at high speed. These qualities mean that I expect to be re-reading and savouring The Whalebone Theatre many times in the future.

Sue for the TripFiction Team