Home Latest Novel set in Somerset, UK, and we chat to the author about location…

Novel set in Somerset, UK, and we chat to the author about location…

“Marriage is a very secret place”

The final cover with the ARC copy

This novel is very much in the Aga-Saga genre, and will definitely appeal to those readers who are drawn to Joanna Trollope, Santa Montefiore, and Hilary Boyd.

At the heart of the novel is long suffering Olivia Parry. Husband Geoffrey’s factory ‘Downings’ has gone into receivership and as a result they have lost their beautiful home Manor Farm, and the life they had.

Friends – many of them ex employees – are giving them a rough ride too. Olivia has had to take a job at St Bedes, a Boarding School for both girls and boys (Geoffrey himself an ex-alumnus), taking care of the pupils in a variety of capacities. The Parry’s son Edward is a boarder there too. Olivia and Geoffrey are de facto living apart, although Geoffrey is living at the Rectory with his foreboding Mother. He is a destitute and pretty broken man, with an undermining and cutting mother who is still mourning the death of her husband. Olivia, although very patient, is at her wit’s end and is relieved to return to her humble little flat at the school.

This is a multi-layered novel and well observed. At the heart is the Parry’s failing relationship, inflamed by Geoffrey’s at times feckless behaviour. But there are also bigger life issues that slide in and out – death, abuse, harm, illicit couplings… the book even opens with a near-suicide. It takes quite something for an author to handle so many without overhwhelming the reader, but the author creates a very plausible storyline. She is good at creating situations and giving her characters plausible motives for acting in certain ways.

She is also deft at setting the story against a rather mildewed, mid range boarding school where the children suffer and the adults around them play out their issues, and pollute the dynamics between the individuals. On one level I found it to be a rather depressing read given the range of human behaviour she describes, but on another it is quite a riveting read.

The book is set in and around Somerset and in our #TalkingLocationWith… feature Colette shares with us her the setting of Somerset and Bath. Over to Colette:

Bath produces more than its fair share of authors. Even if their novels aren’t set in the city, I have no doubt that living somewhere so striking, and with such a vibrant cultural scene, inspires creativity. At least that has been my experience.

In my new novel, An Unsuitable Marriage, I wrote a scene where Olivia, one of the main characters, spent an afternoon in Bath with her best friend. A rift had opened up between them and Olivia hoped this would be the perfect way to mend it. Street entertainers outside the famous Pump Rooms, coffee and cake in one of the many cafes and a busker singing opera, all helped set the scene.

Locals are used to sharing the city with tourists, shoppers and students on school trips. Many head for the world renowned Royal Crescent, with it’s stunning Georgian architecture and immaculately manicured lawn. It’s often used as a film set and I took a photo from my window of a crew preparing to shoot a TV drama. In the other Royal Crescent photo, I managed to capture a fiery sunset as I walked my dog.

Colette at the Kennet and Avon Canal

But there is more to this area than the honey-coloured city. Bath is surrounded by verdant Somerset countryside, much of it owned by the National Trust. This forms the backdrop for some pivotal scenes in An Unsuitable Marriage: secrets shared on dog walks, a devastating family showdown, illicit romantic trysts. As an avid walker myself, I find inspiration in the riverbanks and towpaths, the undulating valleys and hills. The photo of me by the Kennet & Avon canal was taken during a short break on a long walk. I took the other canal photo because the water looked like pea-soup that day.

For visitors to the city of Bath I would recommend taking a guided tour followed by lunch at the Porter, and then burning off those calories with a hike along the six-mile Bath Skyline. An evening at the Roman Baths is a magical step back in time and if entertainment is required, there’s the Theatre Royal for plays or The Little Theatre for movies. 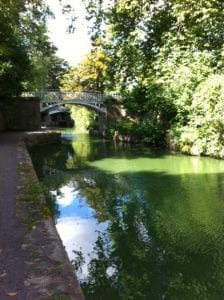 All writers are prolific readers and one of the things I treasure most about Bath is its bookshops. Waterstones takes pride of place on Milsom Street and is spread over three, well-stocked floors. Tucked behind Milsom Street is an award winning independent bookshop—Mr B’s Emporium. It boasts a Reading Spa for some ‘bookish pampering’ in one of the store’s bibliotherapy rooms. Over tea and treats a staff member will chat about your likes and dislikes before introducing you to a tower of books selected to match your tastes. Finally there is Toppings, a veritable treasure trove of books, including many signed first editions. Toppings hosts year-round author events, attracting some of the biggest names in the literary world. Maybe one day I will be among them. Well, it doesn’t hurt to dream….

Thank you so much to Colette for sharing her low of Bath. Some great visitor recommendations!