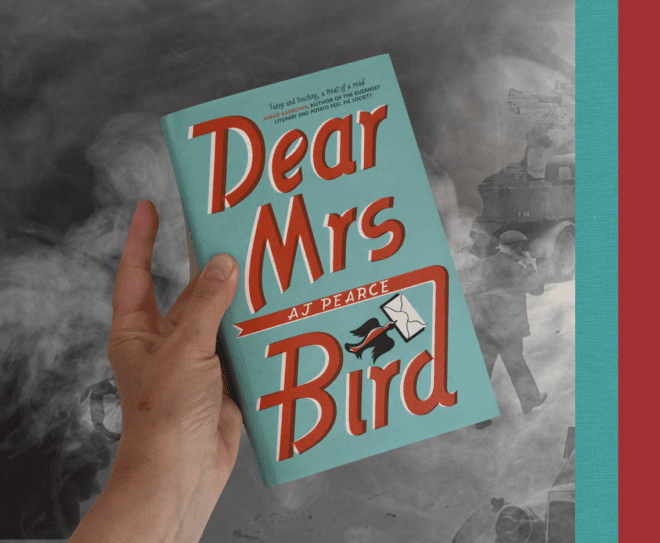 I saw the author speaking at a local event (Forum Books – the award winning independent bookshop, who often host great authors) and was subsequently delighted to read the book. Her own voice is unmistakable in the book, so it was interesting to be able to recall her talking as I read Dear Mrs Bird.

The author on the left, TF’s Tina on the right

London 1941. The capital is caught up in enemy bombing and everyone has to duck and dive and do their bit. This is the story of Emmy who is desperate to become a Lady War Correspondent and is fortunate to spot an advertisement in the paper. Her luck is on the up! She immediately applies and walks into the job of her dreams, or so it seems. However she is merely an assistant to agony aunt, Henrietta Bird, who works at Woman’s Friend. She pens responses to unfortunates who write to her (unfortunate in the sense that they have chosen to seek brusque advice from Mrs Bird, if you get my meaning).

Mrs Bird is a rather scary Margaret Rutherford character (a stout character actress who embodied Miss Marple), who perfectly matched the era. She is of large bosom and strong voice and will not countenance any letters that contain words like Affair, Ardent, Amorous, Bed, Bedroom, Bed jacket, Berlin...

Emmy, with her good heart, cannot bear to see some of these letters peremptorily dismissed and on the sly decides to respond in Mrs Bird’s name, penning gentle and caring answers which she despatches through the mail. As a reader of Dear Mrs Bird you just know it is merely a matter of time before Emmy will be found out; the question is, what will the manner of discovery will be.

Emmy lives with Marigold, nicknamed Bunty and they both have love interests. At first Emmy cannot share her secret with her flatmate but all too soon life and bombs stir up their relationship, and they both have more to contend with than Emmy’s duplicity.

This is a novel that will appeal to a cross-section of age groups, especially as Emmy has more than a nod to Bridget Jones (knickers probably included), only in WW2…it’s all just SO British! Emmy and her chums embrace the jolly-hockey-sticks mentality, stoicism and bravery which all shine through at this trying and traumatic period of history. Similarly, anyone familiar with the girls’ comic of yesteryear – Bunty – and in particular the tone of dialogue in The Four Marys  (a group of four friends at boarding school who have to duck and dive as they embark on adventures) will enjoy this easy-to-read novel of very different times.

You can follow the author on Twitter, and do take a look at the PanMacmillan footage as the author talks about the inspiration for Emmy and Bunty in Dear Mrs Bird