Novel set in mainly in Tuscany

It Happened in Tuscany by Gail Mencini, novel set mainly in Tuscany. 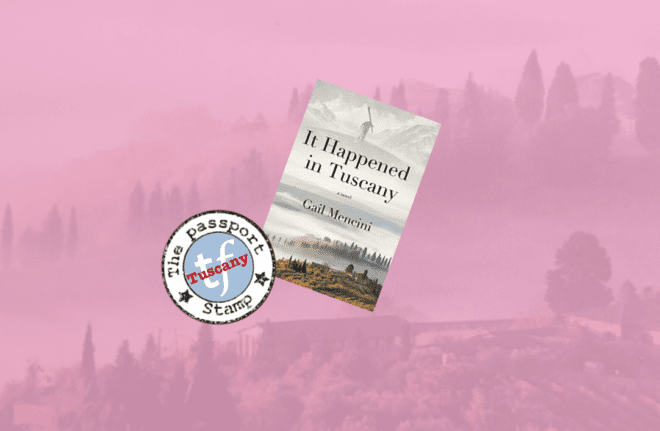 The book opens as a platoon, during WW2, is fighting for survival at Riva Ridge in the Apennines. Will Mills is one of those men, he gets wounded and is rescued by a young partisan, Francesca.

This year is the 75th anniversary of the WW2 10th Mountain Army ski troops’ successful nighttime assault on Riva Ridge (18.2.20 – the release date of the novel) in Italy’s Apennine Mountains, and the author makes a tribute in the novel to the bravery of the men who took part in this campaign.

Fast forward 3/4 of a century and Will is living near Highland in Denver, and across the hall lives young Sophie, who is caring for her terminally ill dog; she has also broken up with her boyfriend; her boss has asked her to make the travel arrangements for aforementioned ex-boyfriend’s upcoming luxury nuptials and she quits her job – she deduces her ex must have been unfaithful to her in the last months of being with her.

Will is a curmudgeonly old stick, who grumps at the drop of a hat. He is fed up with Sophie’s accursed dog who poops in the communal hallway, but nevertheless accompanies her to the vet when things look bad for him. He clearly has a caring side. Cancer is the diagnosis for the dog, but the vet suggests a medical programme which offers Sophie hope, and soon the dog is whisked off for trials. Sophie and Bangor, her dog, now live apart. I wonder, would the dog be taken on, out of the blue, traumatically separated from his mistress to take part in a medical trial? Seems a bit unlikely but it does make her available to accompany Will back to Tuscany without any ties. Will is determined to locate Francesca – his “gun-toting babe” of yore – and, seemingly, a baby that he quite possibly sired. Will Will’s mission be successful and will he track down the love of his life?

Their trip takes them first to Florence and then on to Montepulciano. Francesca’s last letter had been stamped in the city in 1945 and therefore that is the place they start to look for her.

The author is clearly very familiar with this part of Italy and does a fabulous job of evoking locale. When the two are in Montepulciano they visit San Biagio and San Quirico d’Orcia. They go on an errand to Montalcino. They eat the local food, drink Vermentino and generally absorb the atmosphere and ambience. There is also a bit of a love interest….

Overall, for me, a stronger editing hand would have been desirable. There is a lot of to-ing and fro-ing and the characters, I felt, were thinly drawn (although we do find out towards the end that Sophie is carrying quite a lot of guilt with regard to her parents). The use of personal pronouns felt muddled – the names were used where personal pronouns would have sufficed and vice versa. A simple aspect that of course can be remedied with the clear eye of a good editor. The lovely rendition of location suffuses the whole book and that is the highlight for me.

Notes from an Italian hermitage A despatch from Bologna-based author Tom Benjamin at the end of a fourth week...

Venice is the latest place for us to visit in our ‘Great books set in…’ series. Ten great books...

A Theatre for Dreamers by Polly Samson, novel set on 1960 Hydra. A couple of years ago I read...

Love after Love by Ingrid Persaud, novel set in Trinidad. When Betty Ramdin’s ghastly and abusive husband dies as a...

TalkingLocationWith… Elena Taylor, author of All We Buried set in Washington State. Roslyn and North Bend, Washington: Two Towns at...

Call for engrossing and immersive reads at the time of Coronavirus. “That’s the thing about books. They let you...