#OnLiteraryLocation in Galicia – the plan

#OnLiteraryLocation in Galicia – the plan.

I’m heading to Galicia this week, to walk close on 200 km around the north-west coastal corner of the Iberian peninsula. It won’t be far from the end of the more famous and over-populated Camino de Santiago ‘pilgrims’ route’, but the relatively new ‘Camino dos Faros’ – Lighthouse Way – will hopefully be a much quieter and somehow more authentic Gallegan experience.

My wife Gill and I will be attempting the full challenging 9 day route with On Foot Holidays, starting from Malpica and finishing at the End of the Earth in Fisterra/Finisterre. 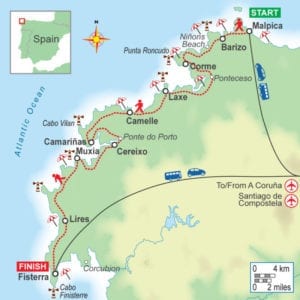 Image courtesy of On Foot Holidays

If fatigue and long refuelling suppers allow, I will be reading Death On A Galician Shore by Domingo Villar to immerse myself in this intriguing region through the pages of a book as well as on foot.

This is not called the ‘Costa da Morte’ for nothing. The shoreline is littered with wrecks, and just as bodies of dead sailors have washed up on the wild windswept beaches for centuries, so begins this chilling story:

One misty autumn dawn in a quiet fishing port in northwest Spain, the body of a sailor washes up in the harbour. Detective Inspector Leo Caldas is called in from police headquarters in the nearby city of Vigo to sign off on what appears to be a suicide. But details soon come to light that turn this routine matter into a complex murder investigation. Finding out the truth is not easy when the villagers are so suspicious of outsiders. As Caldas delves into the maritime life of the village, he uncovers a disturbing decade-old case of a shipwreck and two mysterious disappearances. Death on a Galician Shore is a chilling story of violence, blackmail and revenge that has enthralled readers across Europe…

If I can stay out of the clutches of the mysterious murderer, I’m looking forward to embracing the natural landscape and indulging in the local seafood and wine so vividly brought to life by the author as the story unfolds.

‘As the plot works itself out at a deliberately yet delightfully slow pace, it is Galicia itself that almost becomes a main character, as we are treated to glimpses of its coastal beauty, its cuisine, and its distinctive inhabitants.’ – Simon Clarke on Amazon

‘I read this when holidaying in Vigo. I think I would have enjoyed the tale anyway but it was all the better for my being on site. The streets I walked were those walked by Caldas and Estevez. The towns and villages I visited were those in the book. I ate (and enjoyed) the foods enjoyed by the central characters – and yes, Estevez is right, the lettuce is very good in Galicia. There were minor blips in the translation but not so as to mar an enjoyable story. I want to read more from this author – and I want to go back to Galicia. The two sentiments are related – each helped me better enjoy the other.’ – Tombola review on Amazon

‘I enjoyed the story. The description of the local area made me feel I was actually in Spain.’ – Jane Riordan review on Amazon

That last comment is the essence of TripFiction, helping the reader to see a location through an author’s eyes. And watch this space as I follow in the footsteps of author Domingo Villar and his characters #OnLiteraryLocation On A Galician Shore.