The Lost Daughter of India by Sharon Maas, poignant novel set in India.

The novel opens with three storylines. Caroline has come to India with an idealised view of the country; Kamal is the grandson of royalty it seems, raised at the Palace of Moti Khodayal; and Asha is a young girl who is farmed out and by an quirk of unfortunate fate finds herself being shipped from pillar to post. 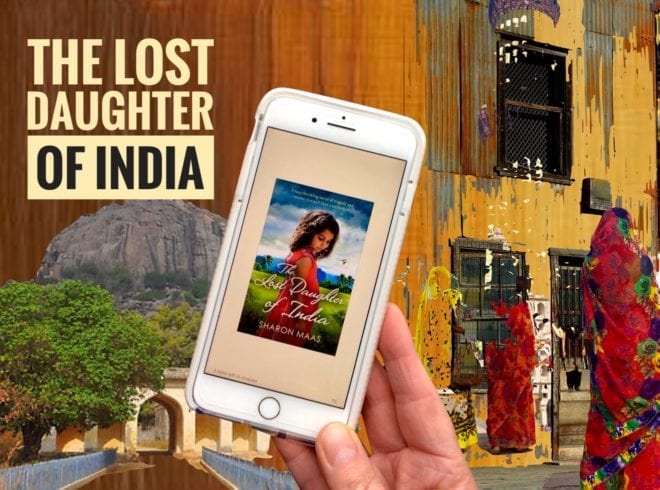 This book is essentially the story of how tiny Asha is abandoned by her mother and is then swept into Indian family life at the Iyengars, where Janiki, an older child, takes her under her wing. But soon the arrangement falls apart, Janiki has gone to study in the States and Asha is bundled off into harsh servitude. However, the family with whom she has been placed, is soon under arrest, once again leaving Asha in the hands of cruel fate. The police are at the house and rather than finding security with them, she falls prey to unscrupulous people and is groomed for child prostitution. The police are complicit in the trade of young girls.

Her parents, living apart, soon come together with Janiki in their mission to find her when they all realise she is missing….

The theme central to the novel is truly heart rending. This of course is fiction but in the heart of Kamathipura, the red light district of Mumbai, there are thousands of girls and young women who are traded everyday. And that is a truly sobering thought to ponder once the book comes to a close.

As you may guess, the stories of each character introduced at the beginning all dovetail into a cohesive storyline.

At times I did feel that some of the exploits of the characters were a little far-fetched but it’s a good and perceptive story, which blossoms into a very readable novel.

The author clearly knows India well and the feel of the country is beautifully brought to life with all its vicissitudes and contrasts. And Sharon goes on to share her very personal journey

#talkinglocationwith…. Sharon Maas, who shares the Best of India: Yoga and Meditation…

In this novel, The Lost Daughter of India, you’ll find this description of India: “Two-faced India, gentle and brutal, gloriously beautiful, hideously ugly. The India that kissed you on one cheek and slapped you on the other. The India that soothed your soul one day and ripped it to shreds the next. The India that nourished your senses and starved your ego, kicking it into the ground.”

But there’s still another India, barely touched on in that book, and it’s that India I seek. It’s the reason why I return, year after year after year, for forty-five years now.

I was a fat, ungainly, desperately insecure, and, to my own mind, desperately ugly teenager. Then one day, as a young journalist, I was sent to interview a lady who had come to Guyana to talk about Yoga. I joined a Yoga class, and from that day I was transformed, both inside and out. The rest is history.

This was, of course, long before the Western craze for Yoga and all things spiritually trendy; today’s India is a wild bazaar where all manner of spiritual or pseudo-spiritual, hippy-dippy, New Age offerings are on sale, with new teachers growing out of the earth like mushrooms and not all of them, sadly, reputable: Yoga is Big Business. I personally would advise against any teacher who engages in self-promotion; a genuine teacher does not need to advertise, and often the dead ones are the best.

There are hundreds, if not thousands, of different Yoga schools, ashrams, meditation centres and teachers in India, and it’s not always true that you pay for what you get; the most expensive is not necessarily the best, and in fact, the very opposite is sometimes true.

In the last forty-five years I’ve had ample opportunity to separate the wheat from the chaff, and here are my top tips for a chance to get back to your own inherent, Best Self; to find that elusive, lustrous YOU that you know, you sense, is lurking within. India is a huge country, so I’ve limited my recommendations to South India. Here they are:

I have found you can’t go wrong with the Sivananada Yoga Vedanta Centres, of which there are three altogether in India, two in South India: one in Kerala, one in Tamil Nadu. My daughter took a Yoga Teacher Training Course in the Kerala one, and she returned enthusiastic and invigorated: the schedule is tough, but that’s part of the deal: with Yoga you meet your boundaries and go past them. I am heading to the Madurai one this August, and I can’t wait!

Physical Yoga, or Hatha Yoga, is actually only a preparation for mental Yoga, or meditation: the ability to reconnect with the basic consciousness at the core of your being, the essential You, as you were meant to be, a being of joy, light and strength, capable of facing all life’s challenges with equanimity and fortitude.

Here again, I would recommend two centres in Kerala and Tamil Nadu. Anandashram in Kerala is a little-known ashram which I visited back in the 1970’s, founded by Swami Ramdas (1884-1968) in 1931. Anandashram is a place of peace: a place to slough off the cares and burdens you drag around through life, and experience the depths you are capable of—just by being there.

My second recommendation is Ramanashram, in Tiruvannamalai, Tamil Nadu. When I first went there in 1973 it was hardly known in the West, a secret tip. In the meantime it has been “discovered” by Indians and Westerners alike, and crowds have come; it’s no longer the quiet haven it once was, but retains its reputation as a place of enormous power and peace. As with Anandashram, visitors of all creeds and backgrounds are welcome, but be warned: there is no instruction, no meditation course, no active teacher there; you are on your own, alone with yourself. Which can be a good thing!

For the spiritually inclined visitor to South India, it’s definitely worth checking out the experimental township Auroville, in Pondicherri, south of Chennai, the best-known of all my recommendations. Auroville was born out of the dream of its founder, a French spiritual teacher known as The Mother: “There should be somewhere on earth a place which no nation could claim as its own, where all human beings of goodwill who have a sincere aspiration could live freely as citizens of the world and obey one single authority, that of the supreme Truth; a place of peace, concord and harmony where all the fighting instincts of man would be used exclusively to conquer the causes of his sufferings and miseries, to surmount his weaknesses and ignorance, to triumph over his limitations and incapacities; a place where the needs of the spirit and the concern for progress would take precedence over the satisfaction of desires and passions, the search for pleasure and material enjoyment.

Bon Voyage! Or, as they say in Tamil, Vaazhga, Welcome!

For many more books to transport you to India, just click here.