Home Latest How to recreate London of 1670 in historical fiction

How to recreate London of 1670 in historical fiction

On a rainy night in December 1670, Colonel Thomas Blood, a notorious rebel, and several of his outlaw friends, attacked the coach of the Duke of Ormonde, one of the chief ministers in Charles II’s Government. Using a ruse about a dead man lying in the road, the assailants stopped the coach near the top of St James’s Street, where it meets Piccadilly, and dragged the duke out of the vehicle. They meant to murder him.

The duke was saved by his own servants, several of whom came running out of Clarendon House, the grand palace he was renting on Piccadilly, approximately where the NatWest bank is now. They came with torches and whatever weapons they had to hand and scared away the would-be assassins before they could kill their man.

The coach had transported the Duke of Ormonde from the Guildhall in the City of London, where he had been attending a state banquet, and the attackers knew the exact route it would take. So why, I asked myself, when I was researching Blood’s Game, did they wait till the coach was within a stone’s throw from his home – with all those armed ducal servants within hailing distance – before making their move?

I had long recognised that Thomas Blood was not always a very competent operator, indeed, he was something of a bungler – he plotted to storm Dublin Castle, in 1663, in a bid to overthrow the Irish Government and that slightly ridiculous plan was quashed with ease. Blood later made a clumsy attempt to steal the Crown Jewels, was caught in the act and slung into the Tower of London. So, could this just be a symptom of his habitual ineptitude that he waited till the coach was nearly home before striking? Then I went to St James Street and “walked the ground” as I like to call it – something I do if at all possible when I’m researching every historical novel.

And suddenly everything became clear.
Blood’s Game primarily follows the attempt by Thomas Blood to steal the Crown Jewels from the Tower, but the novel also explores the debauched vipers’ nest in White Hall (spelled with two words in those days) that was the court of Charles II and, in general, the London of the late 17th century – its bawdy theatres, its dangerous slums, its luxurious palaces, smoke-filled coffee shops, cheery chop houses, filthy taverns crowded with hopeless drunks and reeking food markets. Very little of that colourful old London remains – cities where development is so lucrative are unforgiving of novelists who, 350 years later, attempt to travel back in time.

The Banqueting House, the only part of 17th-century White Hall that remains today Photo: HireSpace.com

The White Hall of King Charles’s day has almost completely gone, destroyed in a fire in 1698; all that remains is Inigo Jones’s magnificent Banqueting House with its incredible painted ceiling. I admired the Banqueting House so much I set one of the key scenes in Blood’s Game there – the private audience that King Charles granted Thomas Blood after the Tower of London robbery attempt – and rather than in one of the 1,500 other rooms of the sprawling centre of Government and royal power, which have now all vanished but which were rather more likely to be the venue of such an extraordinary meeting between the two very different men.

The City of London, of course, had been almost entirely destroyed by the Great Fire which raged four years before the beginning of Blood’s Game. However, much had been rebuilt even in that short time and as I walked the streets of the 21st-century City pretending it was 1670, I tried to imagine everything newly built in brick and stone for the first time, replacing the wooden houses of the old medieval city. 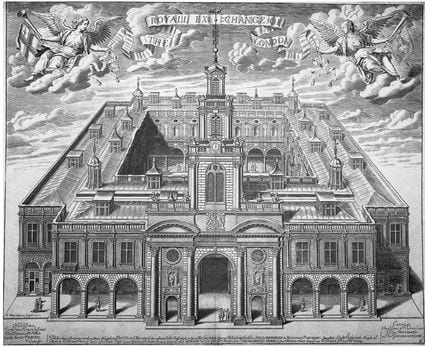 The Royal Exchange, 10 years after the period in the book Photo: Inger Leemans, Pinterest

The Royal Exchange was completely destroyed in the fire of 1666, rebuilt and then destroyed again in the 1840s – but its central location between Cornhill and Threadneedle Street remains the same and I set another key scene there, in the lavishly rebuilt trading space, imagining the stalls of fine goods set out for sale on the galleries that overlooked the open body of the Exchange, where peacock-dressed masked whores drank coffee and flirted with sun-bronzed traders fresh from the Indies, or the Italian and Jewish goldsmiths with trays of bright coins who acted as bankers, while sly pickpockets lurked in the colonnades to prey on unwary shoppers.

While the buildings of the City have changed, the layout of the streets of the capital are largely the same, and the routes my characters walked – and which I walked – are quite often unchanged. With the help of an old map off the internet and a bit of imagination, it is easy to see a tobacco-smoke-filled coffee house where today there stands a Starbucks; and where now a black-suited doorman glowers outside a Wetherspoons to imagine the stinking dive where port wine and sack were quaffed in pints from pewter tankards and cheap fiery Barbados rum was the poor man’s solace.

And at the eastern edge of the City, the Tower of London, if you half-close your eyes, doesn’t seen to have changed at all from the day when Thomas Blood tried to make away with a king’s ransom in precious metal and jewels stuffed in his pockets, inside his clothes and down his high boot tops.

I went to the Tower three times when I was researching the book, and each time I came away with something valuable to use in making the story more authentic.

I learnt about the menagerie, and discovered where some of the exotic animals were housed – just by the Irish Tower (now called the Martin Tower) where the Crown Jewels were kept, as it happens. A mangy lion was caged just by the door which Thomas Blood tumbled out of, scattering precious gems, and I was able to recreate for the reader the smells of a sad, bored, caged beast – dung and raw meat.

I saw the room in the White Tower which might have been Thomas Blood’s cell and visited the headquarters of the Royal Regiment of Fusiliers, where the Tower guards who captured Blood red-handed had their barracks. I was lucky enough to be invited to watch the 700-year-old Ceremony of the Keys and to have a few pints in the Yeoman Warder’s private bar afterwards. But that was purely for fun! Neither the Ceremony of the Keys nor the drinking was included in the book. But I digress . . .

I find that there is nothing like “walking the ground” when researching a historical novel – it gives you the atmosphere of the place, the feel of the streets and buildings, the topography of the area. And, as in the case of the Duke of Ormonde’s coach, an insight that can only make the novel a little better, a little more authentic.

One of Blood’s companions on that rainy night in St James’s Street was his eldest son, also called Thomas, an unsuccessful highwayman. And when I was diligently researching 17th-century rank-riders, as they were called – even though Thomas Junior has only a minor role in Blood’s Game – I discovered something interesting. Highwaymen would very often try to waylay the coaches of their victims on steep hills. The heavy coaches would be slowed significantly by the slope, the teams of horses labouring to climb up the incline. The reason for this was that a coach moving at a crawl far was easier to halt by a masked man with a cocked pistol and a witty quip than one going at full tilt that might just whizz past him.

When I “walked the ground”, I discovered that St James’s Street climbs uphill to meet Piccadilly – not a lot, but quite significantly – and I realised that the ducal coach, would have slowed as it made the right-angled turn from Pall Mall on to St James’s, and then slowed again as it climbed the slope to Clarendon House to the top. It was, in fact, the perfect spot, on the two and a half mile route from the Guildhall, to halt the coach and murder the Duke Ormonde.

And then I thought to myself: perhaps, Colonel Thomas Blood wasn’t such an incompetent bungler as I’d previously 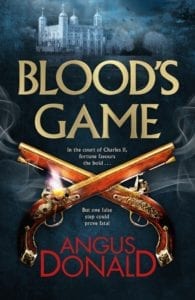 Angus Donald is the author of Blood’s Game, published by Zaffre, hardback £12.99. You can buy his novel through the TripFiction database. You can follow Angus on Facebook and Twitter  and connect via his website.

For more book set in historical LONDON, do check out the TripFiction database.