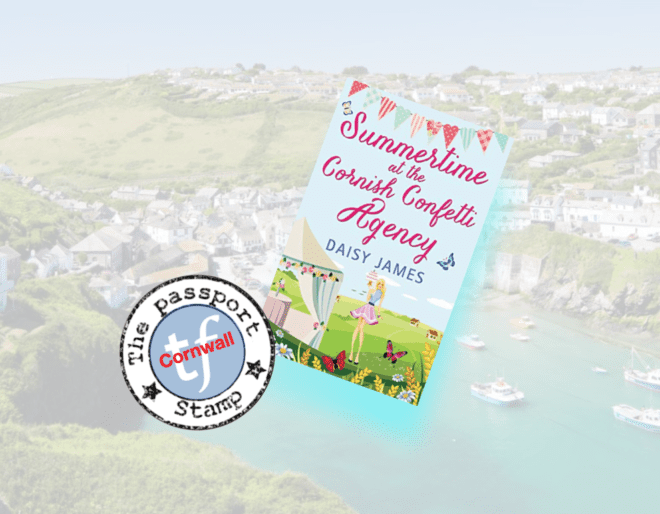 I was delighted to read this book on a Summer’s day when it is pouring with rain and I have the heating on – yes, it’s June in England! The novel is also set in June but it is full of summer sunshine, warm days, open top cars and pretty scenery. Further, I got to name the snow-white labradoodle in the book and I called her Dilly! I was on tenterhooks to see when she would appear and indeed she did materialise in the company of Theo, more of whom shortly.

Lexie is down from London, standing in for Marley who owns the wedding planning company, The Cornish Confetti Agency of the title. It is just a few days until Kat and Dylan tie the knot and she has her hands full. The family and the wedding guests are a delightful bunch of people but there is one young man with an arrogant streak (who also drives a red Porsche, you know the type), who also happens to be the best man and who seems to have an enemy in the ranks. Accidents befall him and enrage him. Lexie has to play detective and try and settle ruffled feathers.

The stress of keeping all the balls in the air take their toll but in the background is grounded Theo, who is maybe catching her eye, just a little. Could he be part of her future? Could she actually stay in Cornwall and build a business and leave behind her partner Elliot (who cheated on her) and her life in the city?

Romcoms have a happy ending and you will not be disappointed.

And for more books set across Cornwall? Just access the TripFiction database!