Talking Location With author John Tagholm – a different side of Paris 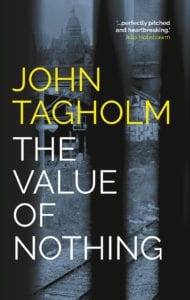 #TalkingLocationWith... John Tagholm, the author of The Value of Nothing – PARIS

In the cover of my new book, The Value of Nothing, you can just make out a deserted railway line, with a track leading off into a tunnel and the walls around marked in graffiti.  Above the scene stands the silhouette of the Sacré-Coeur.  Yes, this is Paris, city of love.  It was quite a journey to find this exact spot, but once I’d seen it, I knew that I could start my book.

I had wanted to write about the ever growing gap between rich and poor, those who, ostensibly at least, have everything and those who don’t.  I began my research almost three years ago, on the coldest January day imaginable.  I took the first Eurostar of the day to Calais Fréthun to visit the Jungle, the migrant camp.  It’s hard to imagine the bleakness of the scene, lines of broken tents, shabby wooden huts wrapped in plastic, deep puddles and huddled people, most of whom had walked across Europe of be there.  Yes, these were the people who had nothing. 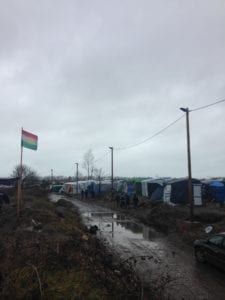 Strangely, as the gale force winds screamed off the sea, I could not have received better hospitality, an endless succession of hot, sweet tea and lunch of chicken stew in the Afghan kitchen.  I had thoughts of setting my book here but when, fourteen hours later, I trudged away from the site, wet and freezing, I passed lines of vehicles crammed with police.  The following day, they began the destruction of the camp, eventually bulldozing it flat.  And with it my idea. 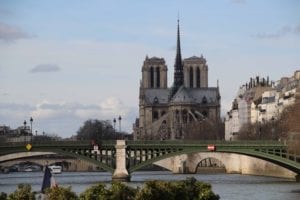 A few months later I continued my research in Paris, but not in the heart of this glorious city but in the parts that tourists seldom see.  We are fed images of the Seine flanked by beautiful apartment buildings, dominated by Notre Dame (my photo was taken before the terrible fire). 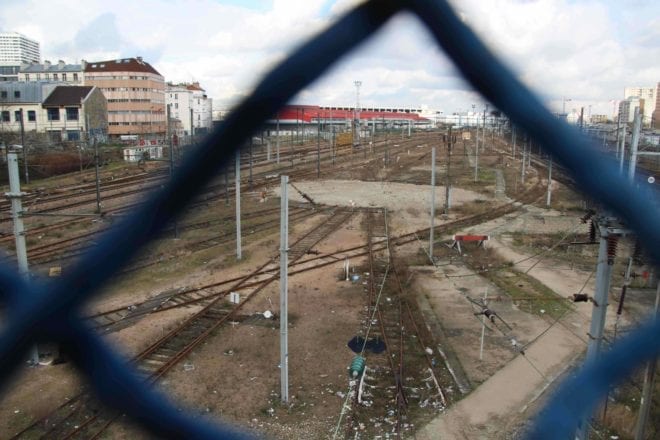 I was seeking a different Paris, but one barely five miles away.  I spent many days behind the great railway termini, the Gare du Nord, Gare de l’Est, Gare Montparnasse and Gare de Lyon.  It is around these tracks that another Paris emerges, along the edgelands of the city.  It was where the lines meet the Pérephérique,  the ferocious motorway that binds the city in place, that I discovered the territory for my novel.

There is a point to the north of the Gare du Nord, at Port de la Chapelle, where the Périphérique, running east-west, rises above the main road bringing traffic into Paris from the north. This crisscross of concrete flyovers is a vision of hell.  And yet here are huddled hundreds of migrants looking for shelter under the enormous concrete roofs. 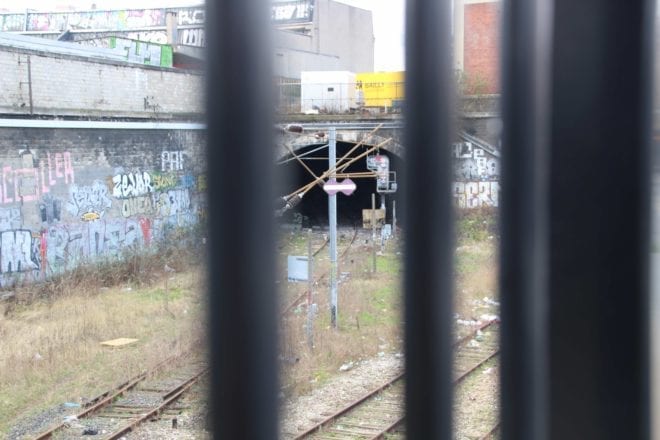 It was just to the west of this terrible conjunction of modernity, that I found what I was looking for.  Again I was walking along a stretch of road along which pedestrians seldom wander, down into a motorway underpass with cars rushing by on my right.  Ahead of me in the tunnel, a sofa burned.  To my left, through steel bars, I saw the old railway line and tunnel.  Just to the left, out of shot, is a migrant camp built on the tracks.  I stood here and watched.   As the acrid smoke from the burning sofa stung my eyes, I saw a young migrant boy feeding his own fire made from broken pallets.

In my mind, he became Youssef, a twelve year old migrant.

Not far away were a series of deserted warehouses.  I had my setting.  My book could begin.  My financier, Michael Finistere, came next, the man who was in Paris to develop the site and who, by accident or fate, would meet Youssef.

I always think that writing the synopsis of a book is such a joy.  The work has been done, the story neatly ordered so that everything seems pre-ordained.  It was far from that.  I’ve sub-titled the book ‘A Modern Opera’, because in it, as in most operas, the great themes are distilled:  wealth and poverty, love and hatred, trust and betrayal.  In it you’ll find ugliness and beauty and you’ll meet Sophie Arditti, an opera singer,  ‘Round’ Mary, as well Erik Mollet, an ex-rugby player.

I gave a talk recently titles ‘And You Think Paris is Beautiful’.  It is, but lurking beneath its surface is another world, a very different backcloth and one that is the essence of The Value of Nothing.

GIVEAWAY! – 3 copies of ALL THE RIGHT CIRCLES (U.S. only)

GIVEAWAY! – 3 copies of ALL THE RIGHT CIRCLES (U.S. only)

We have 3 copies of ALL THE RIGHT CIRCLES by John Russell, set in Raleigh, North Carolina to give...

The chore of reading some titles on NetGalley (the rhythm of reading…).

The chore of reading some titles on NetGalley (the rhythm of reading…).

The chore of reading some titles on NetGalley (the rhythm of reading…). Book bloggers are blessed with being sent...

Literary Tourism: Travelling on the Outback Australian train The Ghan to Darwin by Hazel Edwards ‘The Ghan’ is a train...

Novel set in New York (sorry, but I just don’t get it)

Novel set in New York (sorry, but I just don’t get it)

Fleishman Is in Trouble by Taffy Brodesser-Akner, novel set in New York. Fleischman is in Trouble was one of the novels of...

A Silent Death by Peter May, thriller set in Southern Spain. Peter May is an author who researches his...