I boarded the plane because it was easier than pretending to care about office spreadsheets, less brutal than forcing inadequate words around raw anguish, lighter than retreating to the depths of my bed, once a place of comfort but now lined with jagged shards of pain.

Adrift in a fog of grief, I let my legs take me where they would. The jewels of Constantinople were laid before me as if offered on a tray, but the only treasure that touched my soul was the Crying Column. This green-tinged pillar, glistening with moisture, carved with eerie teardrops, stands in the Basilica Cistern and commemorates the slaves who died building this sunken palace of life-giving water. Here, my torn-apart heart wept for Carly, my precious niece, killed in an accident in a faraway country just four days before. 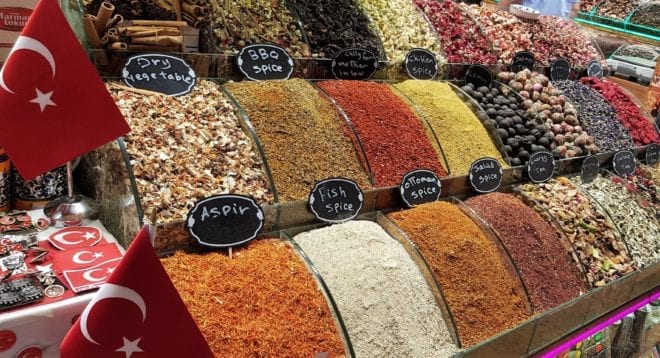 I wandered the wonders of İstanbul: from museum to mosque, church to dervish lodge, fountain to bathhouse, tomb to tulip garden. I explored Hagia Sofia, renowned as the largest building in the world for a thousand years, and meandered through the public and private spaces of glorious Topkapı Palace. I crossed the Bosphorus by ferry and the Golden Horn by foot. I saw much that was beautiful, learnt much that was interesting, and carefully filed each sight or fact into the appropriate mental space, but nothing could pierce my misery.

Trudging homeward along the side of Sultan Ahmet’s Blue Mosque, my attention was snagged by another column. If it could be called a column: a broken, twisting thing spiralling skyward from a sunken pit. I knew at once I had seen it before. Years before. A forgotten moment in Greece, where I shot dozens of photographs of its sinuous bronze silhouette, so incongruous amongst the stone ruins.

It took only a minute to uncover the connection. 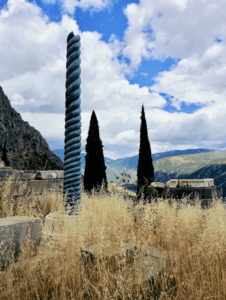 The Serpentine Column was looted from Delphi’s Temple of Apollo in the fourth century and brought by Constantine the Great to the capital city he founded on the site of Byzantium.  Here it still stands, flanked by towering obelisks.  It is ancient, truly ancient, two and a half thousand years old, and this time I could see how its fractured tip once bore three snakes’ heads.

What I had seen amongst the foothills of Greece’s Mount Parnassus was a replica, erected just a year before my visit.

It was only an instant – that flash of interest, that split second of unexpected familiarity – and it was days before I would feel anything like it again, but I held onto it as a little gift in my sadness. It was my first taste of those brief distractions that help the bereaved hold on to the tatters of sanity, that save us from falling into a pit of despair.

Reading can be a shelter from sorrow, and I tumbled gratefully into Jason Goodwin’s series of Ottoman whodunnits. My two weeks in İstanbul were peopled with his characters and powerful sense of place. Here was the harem of Sultan Mahmud II. There was the distinctive outline of the Galata Tower. These winding lanes in the historic Greek and Jewish quarters of Fener and Balat? Goodwin’s detective, the eunuch Yashim, trod them too. With Yashim, I inhaled the pungent scents of the Spice Bazaar and felt the damp chill of an underground cistern. I heard the swelling call of the muezzin and the splash of water as the faithful cleansed their feet at ritual fountains – but I didn’t taste the delicate flavours with which Yashim spiced his meals. Not yet. Grief had turned my appetite to dust. Nevertheless, the books gave each discovery new meaning, and my footsteps made the books come alive.

There are five in the series, and I devoured them in chronological order. While the first, The Janissary Tree, is undoubtedly the best place to start and gave me a grounding in the events and atmosphere of nineteenth-century İstanbul, my favourite remains The Snake Stone. Not only did it indulge my fascination with how writings inform and build on each other – with Yashim examining scribbled notes on a sixteenth-century treatise as he pondered how its author, in turn, was inspired by a fifth-century text – but The Snake Stone’s plot is coiled around the same Serpentine Column which had caught my attention, and gives a glimpse into the true-life mystery of the lost reptilian heads.

I was lucky to see the last surviving snake’s head, or part of it, in İstanbul’s Archaeological Museum. It is missing its chin, a disfigurement which may hark back to Mehmet the Conqueror’s entry into defeated Constantinople in 1453. Anecdotal descriptions of how he flung a weapon at one of the heads, destroying its jaw, include Seyyid Lokman’s Hünername, dating from the sixteenth century, and Edward Gibbon’s The History of the Decline and Fall of the Roman Empire, from the eighteenth. The first of these has a gorgeous illustration depicting the event. The second records that:

“… his eye was attracted by the twisted column of the three serpents, and, as a trial of his strength, he shattered with his iron mace or battleaxe the under-jaw of one of these monsters, which in the eyes of the Turks were the idols or talismans of the city.”

The disappearance of the other two heads is obscured in the turn of the eighteenth century – with one theory surfacing in Goodwin’s stories!

Despite my misgivings, my seven-week expedition through Turkey became much more than a sad woman’s wanderings from place to place. With the solace of reading and those moments of distraction, sparked by the discoveries of travel, it became a literary adventure. Not only did I match books with destinations throughout my trip, I also visited great sites of literature by day and slept in others by night.

Yashim, the Ottoman sleuth, played his part in my bookish journey.  This series belongs amongst the best of holiday novels: quick and entertaining, if one chooses to flip through them at that level; thought-provoking and rich in both character and history if one wishes to read more deeply.

Thank you to Sally for such a tender and insightful sharing of a difficult yet rewarding time.

Sally Jane Smith is the author of Unpacking Greece (working title), anticipated to be published in 2022, and has started work on her second book-length project, inspired by her journey through Turkey. Follow her through her newsletter and via her blog, where you’ll also find her social media links. Follow her on Facebook, Twitter, and via her blog